Thailand cannot be reformed without its political parties also reforming themselves. 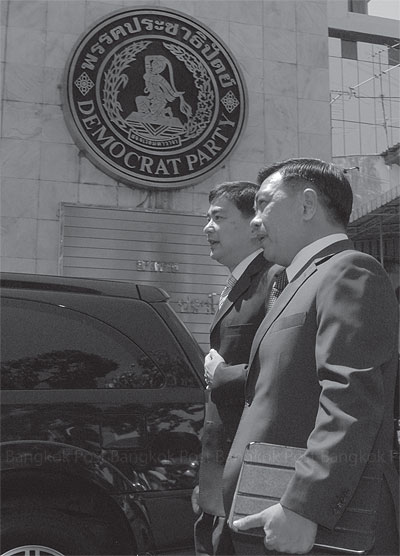 The Democrat Party is home to a base that includes people who wanted to invade Cambodia over the Khao Preah Viharn issue; monarchists who want to extend monarchical powers; elements of the military and bureaucracy who believe in self-perpetuation; and social conservatives who think Thai traditions are the only things holding the country together.

In addition, it includes relatively centrist positions, including conservative liberalism, classical liberalism, and, to a lesser extent, neo-liberalism.

And in fact, in international arenas, the Democrat Party positions itself not as a conservative party but as a liberal party and so is a member of Liberal International.

One path for the Democrats to win middle ground and so an election is by moving away from being a socially conservative liberal party and becoming more of a classical liberal party along the lines imagined by its 1946 founding ideology. Classical liberals see individual liberties married with a strong legal system, private property and free trade as the drivers for progress.

At a high level, potential policies therefore include respect for fundamental human freedoms, social justice in the form of separation of powers and a timely and politically independent judiciary, a middle ground between a state-run market and private monopolies, equality of opportunity in education and reduced income inequality, environmentalism and internationalism.

These are all described in the 1997 Liberal International Oxford Manifesto and present worthy goals.

The problem is that the kind of policies which the Democrat Party should be introducing to achieve these goals and win over the Thai cheuy swing voter, rely for their theoretical justification on values which some core Democrat voters do not support.

Basic liberties, according to liberalism, are believed to be the foundation of a competitive free market.

However, basic freedoms such as freedom of speech are heavily undermined in Thailand because of, for example, lese majeste penalties — which now apparently extend throughout time to all Chakri dynasty kings and so make teaching parts of history in Thailand practically impossible.

The fact that foreign students will know more about Thai history than Thai students is an embarrassing position that could be corrected by more narrowly defining the crime, abolishing prison sentences and introducing means-tested fines.

Basic media freedoms also need to be promoted. The navy’s position on Phuketwan website’s coverage of the Rohingya saga in Thailand is another example of a lack of basic liberties.

A Pulitzer-prize winning series of Reuters articles, reproduced in part by Phuketwan, has resulted in the Thai navy suing two Phuketwan journalists.

According to the classical liberal position, the state suing newspapers must be a last resort and should not be a role of any arm of the military because of the threat it poses to basic liberties.

It is also harmful to Thailand’s international position — another concern of classical liberalism — as it affects Thailand’s ranking in press freedom indexes such as Reporters without Borders’ World Press Freedom Index (Thailand is currently a wretched 130th).

As classical liberalism requires a swift and fair legal system, a massive investment in the legal system is needed to create more judges and more lawyers and reduce wait times.

In addition, classical liberalism adopts a rationalist viewpoint to progress, so Thai judgments need to be detailed and published to develop decent case law.

Moreover, according to "slim state" classical liberalism, there should be no military-controlled companies outside core areas such as arms manufacture because they distort the market.

This means bringing in international external consultancies to audit what the Thai military owns, both as an army and privately, and then privatising interests or establishing conflict of interest legislation — a process last seriously attempted under the first Anand Panyarachun administration.

A classical liberal party would also see extreme wealth inequality as a systemic failure of the market.

Crucially, the Democrat Party does support a property tax, which if passed could help.

Thailand’s political and socio-economic landscape would be restructured along more progressive lines, and billions would be raised for structural investment.

Another insult to basic human rights is the fact that Bangkok children significantly outperform provincial children.

Under a classical liberal model, the barriers to these children performing as well as Bangkok children would be seen as undermining basic liberties. One part of the answer would be bringing in private, international consultancies to analyse and externally audit the education system in a completely transparent process, then privatising non-core aspects such as exam writing.

Classical liberal parties also promote a sustainable environment, and this means a new Minerals Law that would see the legal prevention of environmental destruction as just as important as remedial action.

No other political party could risk taking on all these modernising policies as they would experience a backlash from interests in both the state and private sectors. For example, land banking is a favourite means of speculation in Thailand, making passing a property tax including taxation of idle land extremely difficult.

The policies would also need officials and army officers to retire early and the generals and mandarins at the top of companies and ministeries to accept less of a role in society or in policy-making.

As an "establishment" party with its heart in the political right and its head in the centre, it will take exceptional leadership to accomplish these objectives.

The kind of leadership that can both persuade Democrat core voters to revise their concepts of traditions and the status quo and convince Thai swing voters that the Democrats can and will transform society.

The kind of leadership that supports reformers such as Alongkorn Ponlaboot, not hides them, if it wants to restore the Party’s reputation as one that can take constructive criticism — and use it.

But after all, creating a modern Thailand that can hold its head up high in the international arena is why the Democrat Party was founded. Wasn’t it?