A lot of people are tired of the protracted political conflict, which has exhausted our capability to absorb stress, economic and otherwise, and made us fearful of the uncertain outcome amid the looming spectre of violence. 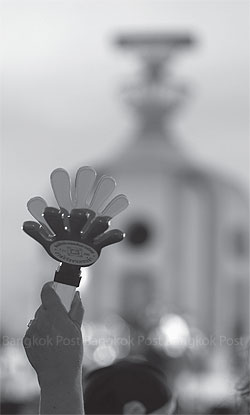 A file photo shows an anti-government protester raising a hand-clapper in front of the Democracy Monument. Rival forces are trying to mobilise more followers, but a simple census will save them the trouble. Thanarak Khoonton

This fear is well grounded, since, from the end of November political violence has claimed 22 lives and wounded more than 700, mostly opponents of the Yingluck government.

A respected journalist recently asked me if I continue to be hopeful for a non-violent conflict transformation in this odd land given the fact that the conflicting parties — the People’s Democratic Reform Committee (PDRC), led by Suthep Thaugsuban, and the United Front for Democracy against Dictatorship (UDD), led by Jatuporn Prompan and Nattawut Saikuar — are preparing for a confrontation after a de facto truce during Songkran. Both sides are, of course, anticipating the two key judgments due to be delivered soon which will have broad implications on the fate of the Yingluck government.

The political conflict is unusual in its resilience and seems to defy crude prediction. In recent interviews given by both Mr Suthep and Mr Jatuporn, they have claimed and promised to conduct their fights as non-violent protests.

Mr Suthep, in particular, said if the possibility of confrontation with his nemesis arises, he would simply tell his people to go home. There are two choices here — either believe them or don’t.

I choose the former, not because of the inherent goodness of either man, but because they are both experienced political actors. What is most intriguing is the fact that both sides seem to accept the numbers game, counting the heads of people who would come to their respective campaigns in different locations inside and outside Bangkok, as the arbiter of who should win in this intractable political conflict. If they do walk their talks, then perhaps violent confrontation will be avoided.

Elections, admittedly with all their imperfections, are one of the most significant innovations in conflict resolution  because “we the people” throughout history have found a way to solve the thorny political decision of who should rule by counting “our” choices through the voting system. Works on democracy focus primarily on the question of “who” should be counted.

In fact, one could write a global history of democracy on the issue of the expansion of this “who” question. It is indeed through painful historical processes of struggle that women, people of different skin colour, beliefs, or places of birth, could all be counted as citizens in a given political society with the right to choose who should govern them.

But an often neglected principle of this development is the fact that the process of counting has indeed become a technique to solve this conflict of governance, to determine where sovereign power should reside, at least for a period of time.

To count something is to announce its existence and signal its importance. With counting comes power. In the past, the counting of manpower and weapons were parts of determining the success and failure in a power equation. With a strong will to use them, those with more numbers might win their conflict.

The success of democracy as a conflict resolution process has been to transform numbers of arms and manpower into numbers of ballots and voters. But counting remains a decisive measure of who should win in such a conflict without spilling blood or killing anyone, cases of electoral violence notwithstanding. Is there now a possibility to work towards solving the present conflict without resorting to violence, accommodating both sides’ agendas while not throwing democratic principles away?

When the protests resume, both sides will try their utmost to persuade people to join them, ordinary citizens as well as civil servants of all stripes. At the end of the day, participants’ heads will be counted, reported and disputed by both sides who will naturally claim that their numbers are much higher than reported in the press aligning with their opposing forces.

This is normal since the creation, selection, promotion and proliferation of such numbers are the stuff of politics. But non-violent action does not only mean filling the streets with more bodies. If heads need to be counted, is it possible to use a census as a way to mitigate this protracted conflict, which could turn more violent with the confrontational style of primarily non-violent street protests?

Taking a census is not the same as a referendum, which cannot be undertaken at the moment since it is covered by Section 165 of the constitution and would thereby be problematic for the precariously placed Yingluck government. It is not polling people’s opinions, where both polling methodology and pollsters’ credibility have already been seriously called into question.

Since the 19th century, a real innovation of census taking has been in its systematic quantification. It is not asking for a person’s opinion but their information; much of the time, his identity in terms of gender, age, religious affiliations, income brackets, among other things.

I would argue that, with proper design and relying on bureaucratic professionalism, the National Statistical Office has the expertise to carry out such a census within a short period of time, and that even though the cost of a nationwide census covering more than 20 million households would not be cheap, it is far lower than the cost of an election or referendum.

If the National Statistical Office is ordered to organise a census on the question of “Which side are you supporting — the PDRC or the UDD?”, the answers collected will result in a process of counting the number of people behind each rival group, not unlike asking for people’s religious affiliation or gender identification.

There could certainly be several choices for respondents to choose including “supporting both” or “supporting neither” or “not recognising both sides”. Census takers could visit people’s residences to hear their opinions without the need for protesters to take to the streets.

These answers would be counted as a credible outcome of the numbers game desired by both conflicting parties without the risk of violent confrontation. We might also learn how divided society has become and how big or small the group is which remains neutral.

Once the number of supporters are counted, both movements and the forces behind them could properly assess the outcome of this protracted conflict, not unlike counting the number of people who come out onto the streets, but more comprehensive and more credible.

Importantly, the identifiable support each conflicting party could expect to rely upon would provide crucial data needed for those involved to come up with a realistic decision, hopefully without resorting to violence as the arbiter of conflict.

A consequence of dwelling in an intractable conflict is that a society feels trapped in hopelessness. Census taking, utilised with caution and realistic expectation, could become a possible non-violent transformation for Thailand’s conflict.

After all, the power of census lies in its inherent fiction that everyone is in it and each has a clear place in the political landscape in question.