For six months, it has been a death match, but politics has suddenly taken on the air of a death watch. In a matter of days, the actions of caretaker prime minister Yingluck Shinawatra will be judged by two bodies generally seen as critics or worse, and the top man at either one can literally throw her out of office as easy as snapping his fingers. Easier.

The Constitutional Court is considering whether the prime minister acted illegally when she transferred the head of the National Security Council (NSC) in 2011. Legally speaking, maybe she did. The Administrative Court found that the transfer was not done the right way, and ordered him reinstated which, last week, he was.

The National Anti-Corruption Commission (NACC) is considering whether the prime minister was careless and imperious in handling the details of the widely disrespected rice-pledging scheme. The NACC is looking at charges that Ms Yingluck failed to investigate charges of corruption within the scheme (although it has not, so far, identified any actual corruption).

A "guilty" charge from either body will mean the prime minister's automatic dismissal from her caretaker post. An additional possibility is the court will ban her from politics for five years. That would end one of the shortest political careers in Thai (or other) history. It would also trigger knock-on crises. 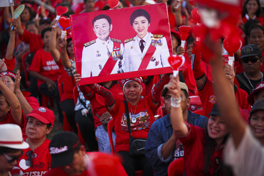 Starting tomorrow (Monday), the red shirts are going to turn black, the colour of mourning, and start another rally in the Buddhamonthon area. There is no time limit, but they will be there for the decisions on their prime minister. If the death watch predictions are true, the next move by the black-clad red shirts is, right now, unknown. It is unlikely, however, to be, “Oh well, we fought the good battle and have to accept the decision.”

Look the other way and you can see the man who wants to be called “The Kamnan”. When the red shirts cry, “judicial coup”, anti-government protest leader Suthep Thaugsuban is going to reply, “No, we did it.”

Last week, Mr Suthep and his core supporters in the People’s Democratic Reform Committee (PDRC) put themselves back in yellow shirts, just like the good old days or, if you prefer, the bad old days. They will continue their small but noisy marches around Bangkok for the rest of this week and then, a week from Wednesday (the day after Visakha Bucha holiday), he has called everyone back to the street for the ninth "final victory" push.

If the court or the NACC do what most of the country now expects, Mr Suthep and his reborn yellow shirts of the PDRC will be claiming they did it.

The clock is ticking. The tick-tock is relentless, although Ms Yingluck has at least a few days left.

While everyone quietly staged the death watch, the news was dominated by Abhisit Vejjajiva, former prime minister, former opposition leader, resigned MP and head of a hugely depleted Democrat Party, many of whose members have turned their loyalty over to Mr Suthep. He trekked around town meeting military phuyai, election commissioners and reporters.

Mr Abhisit, refusing to give details all week, said he had a plan that would combine reform efforts and simultaneous elections, thus serving both demands. From the Bangkok media, always an easy sell for Mr Abhisit, came a very solid, response: “Give Mark a chance.”

He tried some strange marketing. “If you accept my plan, I will step down from politics,” for example. Since he holds no political post, it wasn’t clear what would happen. One wag suggested it was a threat: “If you don’t all accept my plan, I’m coming back to be prime minister again.” But on Friday, Mr Abhisit did actually issue a threat: If you don’t accept his plan, he will boycott the election. Again.

Prime Minister Yingluck received the Abhisit proposals with a bit of grace, urging everyone to give the former opposition leader moral support for his attempts to solve national issues. For all that, she didn’t meet Mr Abhisit (and he didn't suggest a meeting). The Democrat leader also stayed well away from the kamnan, who rudely told “everyone” not to interfere with his campaign to overthrow the prime minister completely.

Apart from Ms Yingluck and the media, Mr Abhisit’s middle-of-the-road approach has received pretty much the same reaction that everyone gets in the middle of the road. He was run over.

The worst news for the former opposition leader was that the fastest, heaviest lorry of criticism was driven by former yellow shirts, veterans of the 2005-2008 campaign that wound up with Mr Abhisit taking the oath as prime minister.

Of course Mr Abhisit triggered automatic hostility from many red shirts and Pheu Thai, apart from the prime minister. Udomdej Rattansathien of the ruling party figured Mr Abhisit was doing it all for a special person: Mr Abhisit. "He has a vested interest in his proposals," he said.

V Adm Pratheep Chuenarom, who still calls himself a PAD core member, won the Strange Tale of the Week award. According to him, Mr Abhisit, ex-finance minister Korn Chatikavanij and Thaksin Shinawatra's ex-wife, Khunying Potjaman na Pombejra, held a meeting in Oxford, England, and agreed on the Oxford Deal, which Mr Abhisit was now putting forward.

On the old yellow shirts’ favourite TV station, ASTV, Phaisal Phuetmongkhol, former member of now-defunct National Legislative Assembly, expanded on the weird story of the Oxford deal. Apparently, it means that Mr Abhisit will soon be made prime minister, to serve a one-year term before another election.

But Mr Korn served up the unkindest cut to his old boss and fellow Oxonian. He was quick to deny the Oxford deal, but as of press time did not appear to be even considering whether to back Mr Abhisit’s so-called centrist plan. And Mr Abhisit was demanding the caretaker government just quit and end the death watch.