For the past seven years, since the coup of 2006, Thailand has seen governments come and go with increasing frequency and the divisiveness in the country has deteriorated to the point of political paralysis. 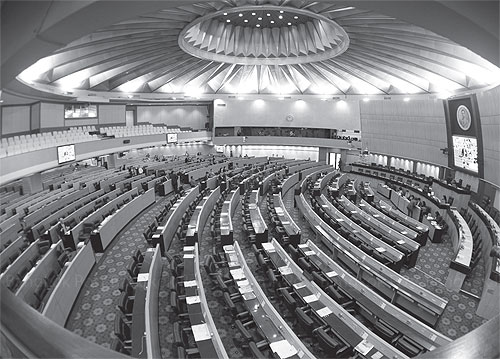 An empty parliament meeting hall, a symbol of stalled parliamentary democracy as key rival parties refuse to negotiate on reform measures, given entrenched views on what is constitutional and what is not. Thiti Wannamontha

The quality of the bureaucracy and leadership in the state enterprises have been declining alarmingly due to aggressive political interference and widespread nepotism.

Corruption and abuse of power are at unprecedented levels, and the profile of the country in the regional and international arena has been in a deepening eclipse.

So much so that a national consensus for major reform is gaining ground and diverse political and civic groups have increased their decibels in the call for substantive restructuring of the Thai political architecture.

There is an obvious increase in the degree of political awareness among the Thai electorate at a pace and breadth unseen before in our political history.

Some meaningful issues of reform have been identified, facts and figures from solid research have been presented, rhetoric for reform has become a catchword for all political dialogue and discussions in the past several months, if not years.

There is this illusion that major national reform could be put together by a particular group, which lacks the mutual trust to join hands and combine efforts, preferring to be exclusive rather than inclusive in the exercise of reform, arguing that the other side is not sincere and/or lacking the legitimacy to carry out necessary radical changes needed. All the while, the elements of reform are being compiled and some of them are similar and others are not too far apart.

There is also a misguided belief that a reform process could be put together in a tidy and timely manner that would be complete in a short period of time. Put the elements of reform together in a package, tie it up in a colourful ribbon, and voila, it is complete.

Well, the reality of meaningful political reform is far more complicated and untidy than that simplistic wishful thinking.

What is apparently missing, however, is a clear, practical and legitimate process for that “package of reforms” to be translated into a new political platform, ushering in new politics that the country desperately needs.

There is an urgent need to institute the process by which a national, all-inclusive dialogue on political reform can proceed with legitimacy and popular confidence. These seven steps are being carefully considered within the prevailing political situation and existing constitutional and democratic framework and the collective sense of urgency that the Thai people have been articulating.

1. An acceptable and legitimate process. We have to agree on the need for a quiet and coordinated dialogue among all the major protagonists in the Thai body politic.

Disparate elements of reform, one-sided demands, rigid and unyielding claims for exclusive legitimacy to institute and supervise the process of reforms must be carefully examined on the basis of true democratic norms and practices.

It is futile for one side to advance an argument that a winning majority is a licence to defy the law and the sense of decency that the Thai public holds dear. And it is equally unrealistic to expect universal support and acclaim for a group of people, however large or small, to take matters into their own hands and hope that its goodwill and sincerity will be enough to win the national mandate for comprehensive reform.

2. The process must be based upon the existing constitutional and democratic institutions that are already in place. Short of a military coup, which is determinedly and rightly resisted by the military themselves, and a tearing up of the constitution, and a full blown people’s revolution, which is being viewed with high scepticism in many quarters, Thailand’s reform process must proceed within the existing constitutional framework, in its letter and spirit.

The 2007 Constitution has made it abundantly clear if any political situation could not find prescription in its provisions, then “the constitutional practice in the democratic regime of government with the King as Head of State” (Section 7) shall be the guidance for the political impasse. In this case, the recently elected Senate can serve as a Pillar of Legitimacy, acting as parliament in the absence of the elected House of Representatives (Section 132), to any agreed reform and its necessary legislative action.

3. An acceptable coordinating mechanism that would synthesise various points of reform which are being promoted by a myriad of groups and organisations from within the government, among the opposition groups, the business community, the media, academic circles and civil society at large.

There seem to be many self-appointed groups working on the reform agenda for the country. But each is working in isolation and exchange, dialogue and coordination on a meaningful platform have not been effective or a blueprint of what specific reforms can be framed and implemented. Once this process is complete, we will have a shared vision of how to restore the democratic framework to move the country forward.

4. The need to identify issues of reform that could be accomplished prior to the next general election and those fundamental, substantive and structural issues, such as the drafting of the new constitution and the amendments of major organic laws — that would have to wait for a more “democratic and representative” political environment.

It is unrealistic to believe that major reforms could be instituted without some link to the sovereignty of the Thai people. While the existing Senate could fulfill some of the emergency functions, it cannot perform all of the legislative power on behalf of the Thai people. A blueprint of specific reforms needs to be drawn up. The details must be shared with the wider public for a wider and deeper deliberation.

5. All political parties and relevant independent and constitutional bodies must commit themselves to or lend endorsement to the agreed set of reforms. This is called a Social Contract that would bind the contending and relevant parties to the package of restructuring of power relations in the Thai state, paving a way for a New Politics that everybody expressly desires. Unless and until this Social Contract is achieved, it is unrealistic to set the new date for the general elections.

6. The interim government empowered to do the overall reform shall have the legitimate power to put in place all agreed elements of reform (Social Contract in Point 5), including the drafting of the new Constitution and its organic laws.

This government would just serve as another “caretaker government” with limited power, with no major policy initiative and no action that would commit and bind the future government.

Its only role is to steer the reform efforts through the new full parliament, with the House of Representatives and the Senate, which shall have full legitimacy to undertake the overall restructuring of the power relations according to the new constitution and organic laws.

This government, ideally, should be a “national government” with all political parties included, as a result of the next election, whose date shall be specified based on a national consensus as prescribed above. It shall only last until the agreed national reform agenda is complete. This could take one to one and a half years after the first general election.

7. Only after the entire package of reforms has been instituted shall a new general election be called in accordance with the new constitution and a new set of reformed organic laws. The new government shall be a full-term government with full power to initiate policies and programmes within its mandate. Its power will still be limited by the constitutional framework, it will have to listen to the voice of the minority, the opinion of the informed public and with the best and long term interest of the country in mind.

There must be no more attitude that a majority at elections gives full licence to do what it wishes with no regard of the law or a sense of decency in public service.

To be sure, political reform will not resolve the core of the conflict, which is rooted in a power struggle, but it is incumbent on political parties and relevant bodies to forge a common approach to reform that will at least enable the country to get back on to the road of participatory democracy, with defence mechanisms against abuse of power and unprecedented corruption that have led the universal call for reform in the first place.

Agreement among political parties and relevant constitutional independent bodies on how to approach reform will establish a beachhead of common purpose upon which to launch our much awaited national renewal and reform.

The alternative is to wait for one side to gain invincible advantage over the other. Each side thinks this is just a matter of time. But in reality time means business lost, more bloodshed and huge losses for the nation.

Time to get serious and start a meaningful dialogue on what needs to change to restore Thailand’s position in the regional and international arena and to usher in a mature democracy after over eight decades of unsuccessful experiments.

Surin Pitsuwan, former secretary-general of Asean, is professor emeritus at Thammasat University, a visiting professor at Grips, Tokyo, an adjunct professor at the University of Malaya and the Tun Abdul Razak Fellow at Oxford Centre for Islamic Studies (OXCIS), and a distinguished fellow, King Prachathipok Institute (KPI).