"People can always be brought to the bidding of their leaders. All you have to do is denounce the pacifists for a lack of patriotism and exposing the country to danger."

"It works the same in every country."

So said one of the most infamous war criminals of the 20th century, Hermann Goering at the Nuremberg trials.

Suthep Thaugsuban has won as much as he possibly can, without plunging Bangkok into full-blown violence. Enough is enough. 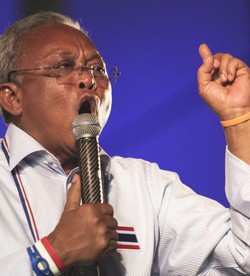 We've heard you, we know what you stand for Suthep. Enough is enough, says Voranai.

He has denounced his enemy as corrupt and the supporters of his enemy as slaves. He has warned the country of the danger of the Thaksin Shinawatra regime.

He has instigated the removal of Yingluck Shinawatra and major members of her cabinet from government.

How did he celebrate victory?

By leading a rampage over the weekend, surrounding news stations and occupying government buildings. Through verbal threats and physical intimidation, and violent clashes, and he has demanded an   appointed interim government.

Bangkok has been under mob rule for too long. Enough is enough.

For the past six months, the entire country has heard his words. We have witnessed his actions. We have seen his failures and his victories. Now, as Thailand moves even closer to full-blown violence, Suthep has to stop.

The entire country already knows what Suthep stands for. It is time to let the people decide whether or not they agree with him.

So far we have had minor clashes. But the threat of increasing and protracted mob rule means we’re heading towards full-blown violence. In turn, the number of deaths will increase dramatically.

If Suthep needs a reason to stop, then let the reason be to save lives.

In saving lives, he must stop pursuing the complete and total "purge" or "eradication" of his enemy. This is unless he wants to make Hermann Goering smile from beyond the grave.

Let’s not make a dead Nazi war criminal smile from beyond the grave.

Through the nearly 10 years of our political conflict, the two opposing forces have made their respective positions  quite clear, over and over again, through words and deeds.

We know what Thaksin stands for. We know what Suthep stands for. It’s time to sit down and draw a road map towards the general election. Then let the people of Thailand decide what they want for the next four years.

Give the people the choice to change their minds every four years.

This doesn’t mean the election has to be tomorrow. But it has to be the common goal within a reasonable period. This country needs political stability and a democratically legitimate government.

The road to achieve this goal requires the two sides to sit down together and pave the way. There is no magic date for the election; the timing of the election will depend on this road map.

We need this not only for the democratic future of this country, but pertinently to save lives now and in the near future.