Learning from a long history of coups
Opinion

Learning from a long history of coups

As Thailand’s latest coup bears striking similarities and differences to its dozen precursors, it behooves the National Council for Peace and Order to learn from the past. The military’s seizure of power on May 22 is now accompanied by daunting challenges and pitfalls that are consequential for all who want to see Thailand regain its democratic traction and way forward. 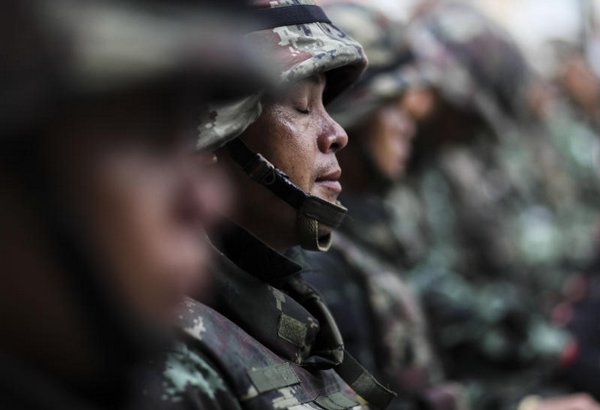 A soldier closes his eyes in a pensive moment while standing guard at Victory Monument. (Photo by Pattarapong Chatpattarasill)

Until recently, Thailand’s frequent military coups were invariably about power struggles between civilian and military authorities or between different cohorts and factions among top generals of the armed forces. These elite struggles in the upper echelons of the bureaucracy gave rise to the “bureaucratic polity” paradigm as a tried and tested explanation of Thai politics. Understanding elite squabbling and power plays in the bureaucracy that featured the military and included the police was the key to understanding Thai politics.

This explanatory frame made it possible to grasp the 1932-47 period, after constitutionalism was introduced, as a fight for power between the civilian and military wings of the June 1932 constitutional promoters, revolving around Pridi Banomyong and Plaek Phibunsongkhram (later Field Marshal Phibun).

Intervening factors included the unsuccessful royalist counter-coup in 1933 and the Second World War. By November 1947, the civilian faction of the 1932 constitutionalism lost for good. Despite Pridi’s counter coups with the help of allies in the navy, Phibun’s “Rajakru” clique that had homes in Bangkok’s Soi Phahon Yothin 5 prevailed, capped by the sinking of the Sri Ayudhya flagship in 1951 and the de-politicisation and political decimation of the navy thereafter.

After the generals beat the civilians, the struggle turned inwards within the military and between the army and police. For the next decade, Phibun presided over growing rifts between his original Rajakru clique, with its police power base of Pol Gen Phao Sriyanon, and a rising army ally in Maj Gen Sarit Thanarat (later Field Marshal Sarit). Denouement was reached in September 1957 when Sarit staged a coup and became prime minister the following year. Thus began Thailand’s 15-year period of military-authoritarian rule by the field marshal and his allies in view of the escalating Cold War and communist expansionism.

For students of Thai politics, the hard authoritarian hand of the most recent coup brings echoes of the Sarit era, brooking no dissent and persecuting opponents and critics. But the Sarit period was much bloodier and more ruthless, featuring summary executions of hoodlums and criminals, compared to the latest coup where the NCPO’s summonses and detentions have been coercive but not fatal.

Field Marshal Sarit was also equipped with interim constitutional provisions that gave him absolute power at a time when international concerns were largely muted owing to Cold War expediency and when the political consciousness of the masses was relatively low. This time, all eyes will be fixated on Gen Prayuth Chan-ocha’s constitutional preference and the attendant powers it gives him and the NCPO.

In the contemporary period over the past four decades, the October 1976 coup offers a key comparison. It was a right-wing backlash against left-leaning students, activists and politicians when the communist threat was deemed a clear and present danger. In 2014, corruption is the new communism. The military’s mop-up operations and pacification campaigns in 2014 are similar to its anti-communism drive in the 1970s. Several thousand activists fled to the jungles back then and eventually returned to society after an amnesty programme was launched. Most crucial was that communism as an ideology and way of life just did not work for them in the end.

Corruption is more ubiquitous now than communism then. As a selfish behaviour exploiting public resources for private gain, corruption generally pervades Thai society, whereas communism was an idea and way of organising society for some against others. Ultimately, communism failed in Thailand, but corruption will always be a problem here in need of sustained eradication. Thus corruption should not be operationally tackled in the same way as communism once was.

Yet the most instructive coups for the current junta are from February 1991 and September 2006, the previous two successful putsches. Again, the 1991 coup by the National Peace-keeping Council was an elite struggle, mainly between two cohort classes of the Chulachomklao Military Academy. Gen Suchinda Kraprayoon led Class Five, and Maj Gen Chamlong Srimuang and then-Colonel Manoon Roopkachorn headed Class Seven. The latter faction controlled key battalions and rose to political power, known as “Young Turks”, from the late 1970s. In April 1981, Class Seven officers staged a coup that should have succeeded against the government of Gen Prem Tinsulanonda. But it failed and its second attempt in September 1985 was futile. Class Five thereafter rose to prominence. When it intervened in February 1991, the unity, resolve and comprehensive lines of command were invincible.

The best thing Gen Suchinda did after his coup was to appoint a technocratic government, headed by Anand Panyarachun. Unelected, the Anand administration proceeded to redo corrupt state concessions and institute structural reforms that yielded benefits to this day, including the meter-taxi and value-added tax. The Anand government also ruffled feathers with Class Five’s vested interests. Gen Suchinda was surrounded by military allies who were in on the take with businessmen and cronies. Having a technocratic government of unwavering integrity also helped the coup-makers address questions and concerns from the outside world.

The worst thing Gen Suchinda did was to become prime minister himself after a bogus election in March 1992, won by the military-aligned Samakkhi Tham Party. After he went back on his word and took the premiership, Gen Suchinda faced the wrath of pro-democracy protesters in Bangkok, led by his Class Seven nemesis, Maj Gen Chamlong. The confrontation deteriorated and came to a violent end in May 1992 when royal intervention put a stop to it.

More recently, the 2006 coup can be seen as a preview of its 2014 successor. Hindsight may well amalgamate these two as one and the same coup, with 2014 trying to finish off what 2006 started in putting down the electoral machine and various governments of Thaksin Shinawatra. The 2006 coup-makers are commonly perceived as ineffective because they led the putsch that ended up with the same Thaksin regime they ousted after a new constitution and election in December 2007. No evidence of this is more poignant than when the lead coup-maker later joined electoral politics as a rather insignificant MP of an unremarkable political party.

On the other hand, the Council for National Security (CNS) of 2006 appointed Gen Surayud Chulanont as interim prime minister. His cabinet appeared technocratic on paper but somehow it was roundly seen as ineffectual and unsuccessful, certainly no comparison to the technocratic performance of the 1991-92 period. Despite its lacklustre performance, the Surayud government did one good thing that is often overlooked. Indeed, it stuck to the election timetable. In fact, it was Gen Surayud himself who went against CNS preferences to delay the election, which would have been a slippery slope away from electoral democracy towards military authoritarianism.

Thailand does not lack coup examples. There are different kinds of coups. It is better to have none but the May 22 putsch is a fait accompli to grapple with. In 2014, the best combined model for the coup makers is to delegate authority and performance to able policy drivers with integrity, avoid being in the driver’s seat directly for plausible deniability, to implement reforms that must be seen as fair to coup supporters and opponents alike, keep vested interests at bay, and set up and stick to an election timetable.

When the going gets tough in military interventions all over the world — and it may well be the case later in Thailand — smart militaries find ways and contingencies to declare victory and head for the exit.