Reveal all on US spying
Opinion

Reveal all on US spying

From the moment of the first revelations of America's intrusive worldwide spy network last year, it seemed inevitable that Thailand would appear in the reports. And now it has.

Another top secret paper released by US spy-turned-whistleblower Edward Snowden shows an unhealthy link between America's intelligence agencies and Thai authorities. According to the report, US spies have placed listening and monitoring devices on the main communications cables linking Thailand with the rest of the world. This demands a swift and complete explanation by Thai authorities.

Mr Snowden worked on special projects for the US intelligence community. Last year, after intruding into the top directories of his country's spy files, he began releasing details to selected media outlets. They have been printed around the world, including in this newspaper. Until now, the Snowden disclosures have both horrified and fascinated readers. But now the Snowden papers have directly linked Thailand to the programmes.

Operation Rampart-A is run by the US National Security Agency (NSA), America's most secretive spy agency. The NSA has been involved in Thailand before, but never so secretly. It was behind listening posts including the Ramasun base in Udon Thani province, established during the Vietnam War.

There is, however, a vast difference between the 20th century operations aimed at common enemies of the two countries, and the new Rampart-A programme, which scoops up millions of bits of information about citizens and visitors to Thailand.

The Snowden papers describe Rampart-A as a simple operation. US spies connect monitoring equipment to the fibre-optic cables that carry almost all internet and telecommunications traffic between Thailand and the rest of the world. The equipment is attached at cable landing points, including in Songkhla and Chon Buri provinces. The NSA monitors the email, telephone, social media and other types of communication from its bases inside the United States.

The papers describing Rampart-A are labelled "Top Secret, Communications Intelligence, No Foreign Distribution". This alone was meant to prevent not only US spies but Thai allies from talking about the contents. After describing how the operation works, the paper reprints an NSA slide, entitled "Approved Signals Intelligence Partners", and Thailand is on the list of "third parties" cooperating with the spy operation.

Collectively, the Snowden revelations should trouble anyone concerned with privacy and basic human rights. They show a vast operation to collect massive amounts of data on individuals and groups, without so much as a suspicion that those being monitored are somehow a risk to either the United States or the world. 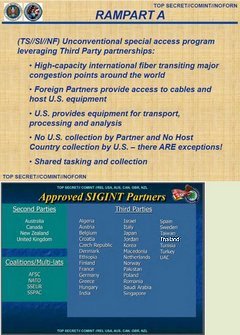 The latest disclosure that the Obama administration was spying on Germany, including Chancellor Angela Merkel, is almost unbelievable. It shows just how deeply the US is invested in spying, not on enemies, but even on close friends.

Ms Merkel acted quickly to show she was serious about breaking the US spy machine. She expelled the CIA station chief, a new low in US-German relations. Thailand, too, needs to act in the wake of the disclosure of Rampart-A. Thai citizens have no desire to have their communications monitored by foreign agencies. It is disturbing to know that the US claims — very credibly, at that — it obtained top-level permission and cooperation to spy through the Thai telecoms systems.

By chance, the top security officials are currently in charge of the country. They should be accountable enough to explain why they helped the US to set up a massive spying operation in Thailand.

Unless the explanation satisfies the country, they should quickly take Thailand out of Rampart-A.