Who do we believe about energy reform?
Opinion

Who do we believe about energy reform?

The Thai public is caught in the middle of an information war between two groups of energy reform advocates. Each side presents contradictory views and, sometimes, information. Be it the size of the country’s estimated gas reserves; the integrity of the current gas exploration and production concession; the fairness of the gas and petroleum pricing structure; or the pricing of petroleum at import parity. The public, including me, is thus confused and wonder who they should believe? 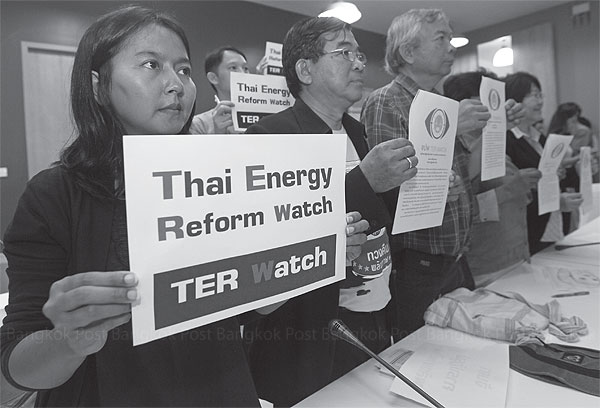 A group of activists announce the setting up of a watchdog group to call for reform in the energy sector. The public is confused with conflicting information from energy reform advocates and the energy industry. Seksan Rojjanametakul

Unfortunately, most experts in energy in Thailand are in the Ministry of Energy or involved directly or indirectly with the national petroleum corporation, the PTT. Some hold equity shares in the company, some are or were directors or employees of the company, some are academics who receive research funding from the company and many are companies that do business with the PTT and so are afraid to speak out against the country's major energy supplier.

Fortunately, I am well acquainted with a group of energy experts from a former Boston-based consulting company now operating in Hong Kong. This group of experts provides consultancy to many governments in the Asia-Pacific region and are familiar with the Thai energy market as well. They believe that the dissenting views may arise from the fact that the two groups focus on different aspects of energy reform: one on "efficiency", the other on "equity".

The first perceives the current subsidy for diesel, NGV and LPG used by households and the transport sector — in the form of regulated prices that are well below cost — to be highly distorted, leading to excessive domestic demand and widespread smuggling of the cheap product into neighbouring countries. Thus, the energy reform agenda of this group focuses on the termination of cross subsidies and cost-based restructure of energy prices.

The second group, on the other hand, focuses on the issue of equity in the distribution of the massive "rents [or profits]" associated with the exploitation of the country’s energy resources, namely, natural gas and petroleum from the Gulf of Thailand.

The huge profit — roughly $3.5 billion in 2013 (111 billion baht) — of PTT's, the state-owned firm that dominates the gas market landscape, raised public suspicion that the company, and its many subsidiaries, may have been able to capture a large chunk of such profits. As a result, this group questions the fairness of price regulation and the soundness of the terms and conditions for the exploitation of energy resources, be it the exploration concession, the price of LPG sold to petrochemical companies that belong to the PTT, the price of refined petroleum sold in the domestic market that is set at the import-parity rather than export-parity price, or the gas transmission tariff that allows for a seemingly generous internal rate of return on equity.

The integrity of the policy makers and regulators are called into question as some of them seem to enjoy direct benefits from the PTT. For example, it is a tradition that the permanent secretary of the Ministry of Energy or his or her deputy sits on the board of the PTT, sometimes along with the director of the Energy Policy and Planning Office, the secretary-general of the Thai National Economic and Social Development Board, the main economic policy body of the government, and even the Attorney-General. Appointment of politicians' "cronies" to the board of directors of the national energy giant also indicates that not only bureaucrats, but also politicians share in PTT’s affluence.

The ongoing debate between the two groups may have diverted the attention of the public from the fundamental problem facing Thailand’s energy policy, the excessive reliance on natural gas and the sharp increase in costly imported gas (roughly $16-17 per mmbtu) that will contribute to a rise in the country’s electricity price in the next few years as the supply of "cheap domestic gas" from the Gulf of Thailand (roughly $9-10 per mmbtu) is dwindling. The question is: Why can Thailand not produce more low-cost domestic gas or resort to other less expensive fuel?

Given the current price controls on LPG and NGV, there has been little incentive to explore new energy sources in the Gulf of Thailand. Under the current regime, PTT must bear the cost of the sale of domestic gas at the regulated price, but is fully compensated for imported gas. It is thus no surprise that the company prefers to sell imported gas rather than domestically produced gas. To minimise the burden of the subsidy, the company tries its best to channel as much LPG produced from domestic gas from its gas separation plants to its petrochemical business as possible.

Because of the price controls, there is little incentive to produce and sell domestic gas, or any other alternative fuel for that matter. If domestic gas prices were to move closer to the global price, the supply of domestic gas and other alternative fuel could be boosted. The move will be a win-win proposition for all as Thailand will be able to reduce its import of expensive gas from the Middle East and at the same time, produce more domestic gas at a lower cost (because of saved transportation costs) and generate additional employment, tax revenue and production royalties to boot.

However, for Thailand to fully benefit from the gas tariff reform in terms of new investment in exploration and production, the concession regime needs to facilitate broad competition for exploration and production of natural gas. Perhaps the government can consider conducting open bidding for gas exploration as in Brazil, with an advertised natural gas tariff instead of talks behind closed doors where all the negotiated parameters are concealed from the public. Contestants may bid for the lowest price of natural gas to be sold to the Thai government, or the size of the government takings offered.

Besides gas exploration and production, downstream gas trade and distribution also have to be liberalised by allowing third parties to buy and sell gas through PTT’s gas pipeline and to use PTT’s LNG terminals for imports.

In the longer run, the ownership of the pipeline business, a natural monopoly, should be separated from other competitive markets in order to ensure non-discriminatory access to the pipeline network. Only when there is effective competition in the energy market and prices are determined by the market, can we do away with all the murky "price regulations" that are at the heart of the current controversy.

Here, I have only discussed the reform agenda from the "efficiency" angle. In my next column, I shall cover "equity".