In my previous article on July 23, I explained that opposing views about Thailand's energy reform may reflect the debate between "efficiency" and "equity." 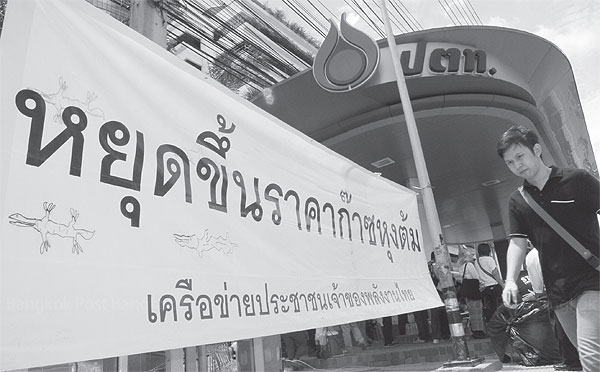 The banner, which says “Stop raising the price of cooking gas” was placed by a civic group outside the main office of PTT to attack the government’s plan to raise the price of liquefied petroleum gas. APICHIT JINAKUL

The advocates of the efficiency goal believe that the liquefied petroleum gas (LPG) and natural gas-fuelled (NGV) price subsidy has led to a shortage of domestic supply of and an excessive demand for natural gas that required expensive LPGs to be imported from overseas to bridge the demand gap. An increase in the domestic gas price will stimulate domestic exploration and production of natural gas and other alternative fuel, which will help generate additional employment and extra revenue for the government from taxes and royalties. At the same time, higher pricing will help curb demand along with imports which saves foreign currencies.

The proposed price increase does not sit well with those who are more concerned about the equity or fairness of the gas pricing regime. To them, the suggested price rise does not seem fair to consumers as they believe that the importation of LPG is due mainly to the surge in demand for it in the petrochemical industry over the last few years. Hence, the industry, rather than households, should bear the cost of imported gas.

So, it boils down to who should get to use the relatively cheap domestic gas (known as legacy gas) and who should bear the cost of its expensive imported counterpart?

Currently, roughly 19% of domestic gas (which consists of gas from the Gulf of Thailand and costs roughly $10 (321 baht) per mmbtu) goes to the gas separation plant which produces LPG and the remaining 81% goes to the production of electricity (54%), industries that use natural gas as fuel (22%) and vehicles that used compressed natural gas (NGVs)(5%).

The domestic gas sold to other buyers besides gas separation plants is pooled with more expensive gas from Myanmar (roughly $14 per mmbtu) and imported LPG mainly from the Middle East ($18 per mmbtu) which makes the average weighted price roughly $12 per mmbtu.

Why is all the attention about prices mainly on the LPG, when the majority of the legacy gas goes to the production of electricity? This is because benefits associated with cheap domestic gas are widely dispersed when the gas goes into electricity production, but not so when it goes to the gas separation plants owned by PTT, the state-owned energy conglomerate.

Proponents of PPT are suspicious that the company may channel legacy gas at favourable prices to its own petrochemical plants which use LPG as "feedstocks" for producing petrochemicals. Is this true? Well, as an economist, I fully believe that any company in PTT's position will try to do so. This is because PTT does not receive financial compensation for selling LPG at below cost to domestic users, but is fully compensated for imported LPG.

This distortionary scheme provides the incentive for PTT to exploit as much LPG for its own use in the petrochemical industry as possible, rather than sell the product at a loss to outsiders. It is therefore not surprising that the petrochemical industry is the biggest user of LPG (35%), followed by households using it as cooking gas (32%), transport as fuel (24) and other industries as fuel (8%). Does the PTT discriminate when it sells the coveted gas to other users?

Currently, LPG that is sold to four different groups of users is subject to price regulation. The first group consists of the petrochemical industry. Because LPG is used as feedstocks for the industry, the regulated price is based on a "netback" calculation from the global price of resin. However, no one knows what this netback price is as contracts between PTT and its clients are considered a commercial secret.

The website of the Ministry of Industry's Energy Policy and Planning Office shows the price at which petrochemical industry pays for LPG to be 24.93 baht per kg. However, several security analysts confirm the price that PTTGC, PTT's petrochemical arm, to be only 20 baht, which is well below the 22.63 and 21.38 baht per kg that consumers and transportation groups pay.

The only other petrochemical company, SCG Chemicals, does not appear to have the same access to the LPG. The company uses "naptha", a substitute for LPG, bought at global prices, roughly 27 baht per kg. As for other industries, regulation dictates that they pay for LPG at import-parity price at 30.13 baht per kg.

Given the secrecy about the actual prices at which PTT sells LPG to its petrochemical subsidiary, it is no surprise that the public is suspicious. It would hardly be fair to raise the prices of LPG sold to households when PTT's petrochemical pay much less for the product despite its handsome net profit (roughly 33,000 billion baht in 2013).

It also does not seem fair that SCG petrochemical and other industries have to pay higher prices for the same product. But the PTT also has its own reason for hogging the cheap energy. Why should it sell LPG below cost to other users that do not share the burden of subsidising LPG and NGV subsidies estimated at 30–35 billion baht per year? So, where does this leave us with gas sector reform?

First, I believe that we need to do away with all the cross subsidies that distort the choice of energy usage and vindicate the monopoly that foots the bill. There should be a single price for LPG. If we are a net importer, as we are now, then the appropriate price will be the import-parity price. If we cease to import in the future because of lower demand or higher domestic supply, or both, then the price should reflect domestic cost.

Second, the difference between the cost of LPG and the import-parity price sold should be collected as excise tax that goes directly to the state's coffers to subsidise LPG prices for low-income households or to be used for other development purposes. Here, the government needs to put a genuine effort in identifying needy households and ensuring that they have access to the low-price LPG in practice before revising household LPG prices. Evidence reveals that there remains a large gap between the announced means-tested subsidisation scheme and actual practice.

Third, we should do away with all the "earmarked funds" (such as the oil fund) as they are often abused given the lax scrutiny in spending. The financing for subsidies or price stabilisation can be allocated directly from the national budget.

Finally, I believe that a successful reform of the Thai energy sector requires a delicate balancing of both efficiency and equity goals. Policies that promote greater efficiency in the use of our scarce energy resources can bring great benefits to the country but will not receive public support if a particular group must take the hit, while another still enjoys privileges.

On this note, the proposed energy reform, including the LPG price revision, will have to ensure that all parties share the same burden or enjoy the same benefits associated with the policy changes. When it comes to human appreciation, fairness trumps efficiency hands down.