Looking at the ongoing tragedy in Ukraine, it has become apparent that the conflict there is happening because of the weakened positions of both the US and Europe in the current geopolitical landscape. At the same time, the so-called emerging powers are increasingly seeking opportunities to flex their political muscles; this is not only true in Europe, but has played out in Asia in flashpoints such as the South China Sea. 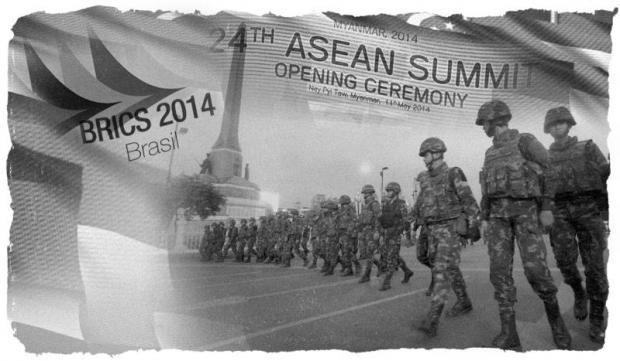 The military is facing a challenge to adapt to a shifting geopolitical landscape and regain trust from the international community.

Moreover, this crucial political change is happening amid a momentous shift in the global economic landscape, exemplified through the recent agreement among the so-called BRICS countries — Brazil, Russia, India, China and South Africa — to establish a New Development Bank (NDB), with a starting capital of $100 billion.

What does this trend mean for the 10 member countries of Asean, and in particular for Thailand?

In truth, the BRICS members have little in common economically and politically. The factor that binds them is a common ambition to challenge the current players in the global economic order.

Unfortunately (for the emerging economies), the rules of the game are still being written by the developed nations; the status-quo players can still claim dominance over international organisations and groupings.

I am often reminded of the odd facts that the UK and France still have permanent seats on the UN Security Council and, even more anachronistically, that Italy — as wonderful a country as it is — is a G-7 member.

Worse, the US still holds sway over the appointment of the World Bank president, while the Europeans still appear to have a monopoly on appointing the IMF president. In practice, this does a great disservice to "outsider" nations. A case in point is how different the policy responses were for the Asians (particularly Thailand) during the Asian financial crisis of 1997 compared with the European sovereign debt crisis of 2009.

Clear double standards in how Western institutions treat those outside their "club" have drawn a significant response from developing countries. Asean, with the cooperation of China, Japan and South Korea, managed in 2010 to create a foreign exchange reserves pool named the Chiang Mai Initiative — a multilateral currency swap mechanism aimed at preventing a repeat of the Asian Financial Crisis.

My tenure as Thailand's Minister of Finance from 2008 to 2011 coincided with a changing of the guard at the IMF, this prompted some of us fellow Asean finance ministers to collectively urge the IMF to abandon its obsolete tradition of appointing only Europeans to head the organisation. As expected, Asean's cries for reform fell on deaf ears, but we nevertheless felt it was symbolically important to make our ideas, as well as our growing dissent, heard in wider international circles.

Asians must also share some blame for inaction by global powers. The lack of good governance in regional culture combined with lack of mutual trust among the big Asian powers markedly decreases Asia's ability to bargain or negotiate effectively with both the US and Europe. This, however, highlights the need for us to work together more closely and to significantly improve our governance. Unity within Asean is a prerequisite, but unity alone is not enough; it must be coupled with increased good governance. This is one critical area where developing countries fall short.

BRICS members, for example, are not all democracies, nor do many of their leaders exemplify the virtues of accountability and transparency. While it is no secret the Chiang Mai Initiative sought to distance itself from the IMF, the fund's processes and personnel were employed by the Initiative. The fact was that the IMF was perceived to be more professional while Asian nations were showing mutual suspicion and lack of trust.

The degree of a nation's development is not solely defined by military might or economic clout; it is also defined by how much trust it can command from its counterparts, and such trust is derived from strong and just institutions. Singapore may be physically small, but it is able to punch way above its weight not only because it is led by determined and visionary leaders but also because it has effectively created strong institutions that are well respected by its citizens.

Thailand, on the other hand, has so far failed to create strong institutions. That is why we have had to rely on quick fixes. The May 22 military coup and broad acceptance of the takeover as a needed attempt to "reboot" the system is an example. However, whether such hasty, piecemeal efforts can provide sustainable solutions to our deep-rooted political problems will take time to assess. More importantly, Thailand's judicial system must be efficient and just. Once corruption is effectively curbed, other ills such as high living costs and low education standards will be able to improve.

I am thus in agreement with those who call for the National Council for Peace and Order to focus on reforming only a few key structural issues at the outset, but to do so passionately and swiftly.

These reforms must include overhauling the police, reforming the judicial system, reforming the electoral system and reforming anti-corruption agencies and relevant laws.

Such proposed changes are daunting but are necessary to ensure this new round of "quick fixes" yields long-term and sustainable solutions.

More importantly, it is the quickest and surest way for us to regain trust from the international community and rebuild broad confidence in Thailand.

Korn Chatikavanij was finance minister from 2008 to 2011 and is chairman of the Democrat Party's Policy Unit.

BURI RAM: Local residents and former employees of The Sound of Animals, a foreign-owned shelter for homeless dogs in Ban Kruat district, on Tuesday filed a noise complaint with the provincial Damrongtham Centre.

Indonesia’s central bank left its benchmark interest rate unchanged at a record low as the economy begins to show signs of recovery from the country’s worst coronavirus wave.

SINGAPORE: After a drastic reduction in wildlife trafficking during the pandemic, authorities in Southeast Asia must act swiftly to stop smugglers getting back in business once border controls are relaxed, according to a forthcoming UN report.