UDD insincere in its denial of 'Men in Black'
Opinion

UDD insincere in its denial of 'Men in Black'

It came as no surprise that core members of the United Front for Democracy against Dictatorship (UDD) and some former Pheu Thai MPs have broken their self-imposed silence to deny the existence of the "Men in Black" and question the arrest of the five suspects paraded before the media.

UDD core leader Weng Tojirakarn asked why were they arrested only now, more than four years after the red-shirt protests in April-May 2010? Former Pheu Thai list MP Cherdchai Tantisirin said if the "Men in Black" really existed, they should have been arrested while the Democrats were still in government. 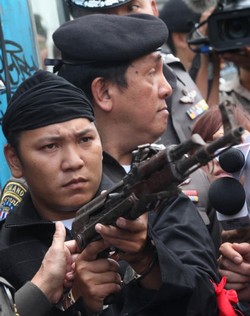 One of the arrested "Men in Black" demonstrates to police on Sept 12, 2014 how he used an assault rifle during the 2010 protest violence. (Bangkok Post photo)

Red-shirt firebrand Jatuporn Prompan also voiced scepticism of the arrest of the "Men in Black" (MIB),  suggesting that the suspects might be just scapegoats.

He warned that a revival of the MIB controversy in order to put the red-shirt movement in a bad light would only undermine efforts at reconciliation. He also insisted that red-shirt protests in 2010 were all about fighting for democracy.

If the MIB really exist, it is clear that the UDD and the Pheu Thai party do not want to be linked publicly with them in any way whatsoever. That is why they have, all along, persistently denied their existence, because admitting to their existence is tantamount to admitting their lengthy protest in April-May 2010 was anything but non-violent, as claimed.

As for Weng’s question - why the arrests only now - perhaps he should first explain why the Yingluck government shelved the report of the Truth for Reconciliation Commission led by former attorney-general Kanit na Nakhon, which provided detailed information about not just the existence of but also the extreme violence associated with the "Men in Black".

Cherdchai asked why didn’t the Abhisit government arrest these mysterious warriors? Well, the ex-MP seems to have conveniently forgotten that the then-government decided to bring in the troops to cope with the protests only because the police were reluctant to do their job. The force then was widely said to be full of "tomato police" sympathetic to the red-shirts.

Cherdchai might also be under the misapprehension that many policemen were killed during the PDRC protests late last year and earlier this year. In fact, most of the fatalities and injuries were peaceful protesters and innocent bystanders. Remember the children who were killed by an M79 grenade in front of the Big C store at Ratchaprasong in broad daylight?

And his suggestion to Pol Gen Somyos that he arrest the people who killed and wounded the policemen also raises the question -- why didn't the ex-MP raise this issue with the former police chief Pol Gen Adul Saengsingkaew, and his Yingluck government, and why they did nothing to stop the shootings and bombings directed at the protesters.

And why didn’t they arrest a single suspect even though some of the culprits were caught in act by surveillance cameras, such as the case of a man who lobbed a hand grenade at the Victory Monument during the height of the PDRC protest? And why they could not seize any of the illegal war weapons being used? And why it was only after the May 22 coup that illegal firearms were discovered and several suspects nabbed by the military?

The claim that the red-shirt protests were peaceful and were meant to win back democracy was pure baloney. The torching of banks, convenience stores, Central World and Central One shopping malls by the protesters and the fact that "Men Black" were allowed to move freely among the protesters made a mockery of the hollow claim of a peaceful protest.

One more thing which many people might have forgotten, or missed – the talks between the Abhisit government and UDD leader Veerakarn Musikapong. The two sides settled on a compromise, with the government agreeing to bring forward the general election and the UDD to end the protest. Had the agreement been honoured by the UDD there would not have been a military crackdown and the subsequent violence.

Regrettably, the deal was shot down by someone more powerful than Mr Veerakarn and the protests went on. The UDD, or those behind it, did not want an early election but the forced removal of the government. Finally, Veerakarn mysteriously disappeared from the UDD main protest site at Ratchaprasong, which was taken over by firebands such as Jatuporn Prompan and Nattawut Saikuar.

The Truth for Reconciliation Commission’s report is available in all state libraries for anyone who wants to know the truth about the 2010 protests. And Mr Kanit would be very pleased indeed if the report is read by as many members of the public as possible - instead of just gathering dust on the shelves.