My office is only about a kilometre from my house and, on a good day, I could probably cover the distance on foot in half an hour. 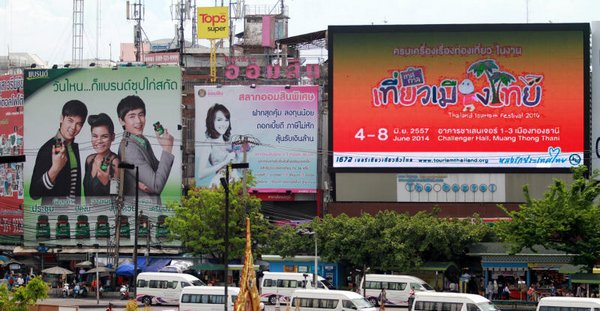 But my morning "university run", driving my daughter to college, takes me on a long detour, to the heart of our capital city where it all began more than 200 years ago. This is the ultimate scenic route: proceeding along the grand avenue that was intended to be a Siamese version of the Champs Elysees, then passing the notable landmarks around Sanam Luang, the spectacular silhouettes of the Grand Palace, the beautiful old buildings of the Royal Thai Survey Department, the Giant Swing and Wat Suthat, Bamrung Muang Road flanked on both sides with Buddha images, images of past kings and Hindu deities, and finally the art deco facade of Bangkok's main railway station, Hua Lamphong, before hitting the home stretch.

It's a drive I never seem to tire of, with very little traffic at that time of the morning to wear me down.

I love getting stuck at the traffic light at the top of Ratchadamnoen Avenue, next to Mahakan Fort, since I can look across at the splendid black spires of the Loha Prasart at Wat Ratchanadda. There was a huge furore when the old Sala Chalerm Thai Theatre, which used to stand on the corner there, was torn down in 1989. It was a Bangkok landmark, opened in the 1940s to stage plays and later films. I admit I was also sorry to see the old theatre go, having frequented it as a child with my movie-buff mother.

But, with the erection of that traditional-style reception pavilion in the foreground to replace the theatre, who can argue that the streetscape hasn't been improved? The art deco buildings along Ratchadamnoen Avenue are also remarkable, although some could do with a new coat of paint. These noble structures have witnessed the unfolding of so many historical events over the last century that they would certainly have a few stories to tell, if only they could talk.

Each time I stop at a traffic light, I take out my smartphone to capture images of these landmarks. The feelings they evoke in me change with the time of day and the weather conditions, so no two days are ever quite the same. I have had to curb my snap-happy enthusiasm, however, ever since the police pronounced it illegal for motorists to use their phones while they're at the wheel.

It's not just the magnificence of these landmarks that attract my attention, though. I'm equally drawn to the dilapidated old shophouses, with their time-worn tile roofs and folding hardwood doors. Despite — or maybe because of — their cracked plaster facades, exposing the old brick walls underneath that now host climbing vines, these buildings have a lot more character than the modern shophouses of today.

I am chuffed at how people coexist with the natural environment, preferring to create recesses in the walls and roofs of their houses to accommodate the branches of mature trees rather than chop them down. Over the decades, these trees have become an integral part of the house, of the family in residence.

There are a couple of things, though, that make my scenic route a little less pleasurable than it could be. The first — and this applies to the whole of Bangkok, not just the historic old quarter — is the proliferation of billboards of all shapes and sizes. They stand out like sore thumbs, totally incongruous additions to the streetscape that distract from the inherent charms of any given location.

Billboards are the bane of my existence in Bangkok. I think the city would be far better off without these eyesores and I could keep complaining about them until the cows come home. Just look out of the car window next time you're driving through any part of town. Then, in your mind's eye, Photoshop out all those giant roadside adverts and try to visualise what's left. Don't you think Bangkok would look much better without them?

Bangkok is not a pretty city, I'll grant you that. It is no Paris or Prague, not in the same league as  Rome or Barcelona. Late-20th-century Bangkok architecture is a weird mishmash of domes and neoclassical pillars and fusion maximalism (if such a term exists). We have skyscrapers that look like robots and others that resemble meerkat families. Some of these modern structures are more aesthetically pleasing than others, but whatever architectural merit they may possess is immediately marred by building-mounted advertising for everything from luxury cars and mobile phone services to underwear.

Drive along the expressway and your peripheral vision is almost totally blocked by massive billboards on either side. Even worse are the LED adverts which give out
a glare that could give you instant cataracts. Some of these are now located just above ground level where they pose a danger to motorists, a brightly lit distraction that makes drivers take their eye off the road. That could well prove fatal to some.

Every empty space in this city of ours has a price, whether it be shop awnings, bus stops, the sides of buses, taxi roofs, fences. If I were the governor of Bangkok,
I would ban advertising in public places. No ads, billboards or flyers would be allowed; none whatsoever.

I'd also get rid of all those ugly electricity cables. But that's a whole different can of worms.

Usnisa Sukhsvasti is the features editor of the Bangkok Post.