Cho Airong is a downtrodden rural community in central Narathiwat province. For 11 years it's been a "red zone", a locus of insurgent operations and violence. 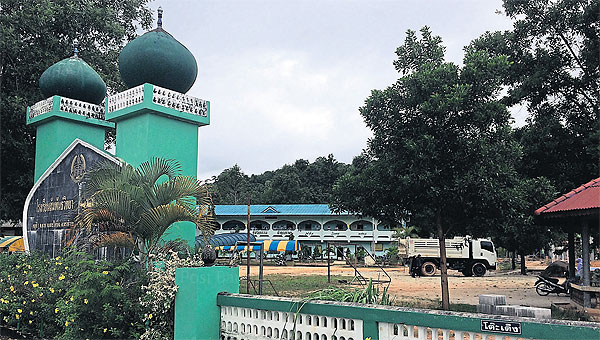 The Samphan Wittaya School in Narathiwat's Cho Airong district has been the centre of state suspicion as a breeding ground for insurgents. But for the Malays, it is where they can study their religion, learn in their native tongue and reinforce their Malay identity. Zachary Abuza

As you enter town, there is a small police post hidden behind concrete barriers, black netting and concertina wire. The security forces remain hunkered down, besieged.

Across the railway tracks that have been the recent target of insurgent attacks, there is a long row of elegant, though dilapidated, shop houses. Their clapboards are weathered dark and have none of the pastels that one might see in the old parts of the provincial capital.

There are a handful of tea shops, small stores with only the basics, and a few warehouses for agricultural products. If there is any disposable income here, it is well hidden. The town is really just this one narrow road, the village is nestled into the forested hills that climb behind it.

Down a small road to the north is a mosque, and across the street is the Samphan Wittaya School, painted in an array of greens and turquoise. Nearly 11 years on, there is still a very deep divide between Thailand — both Thai citizens and the Thai state — and the local Malay community on whether Samphan Wittaya is the cause of the insurgency or its cure.

Samphan Wittaya has been in the state's cross hairs for 11 years and has become the stuff of legend. When insurgents raided a nearby army outpost on 4 Jan 2004 — an act that is usually used to date the start of the current iteration of the insurgency that has claimed the lives of more than 6,200 and wounded almost 11,000 — the school's headmaster, Masae Useng went underground.

He and Sapaeng Basoe, the headmaster of the Thammawittaya Foundation School in Yala, are said to be leaders of the Barisan Revolusi Nasional. They had rejected amnesty or the peace deals that the governments had reached with the Patani United Liberation Organisation and other groups in the 1990s, and they used their madrasas as breeding grounds for a new generation of insurgents.

After the unrest resumed, both schools were frequently raided and many of their teachers were arrested or detained for suspicion of being involved in insurgent operations. And some were clearly involved. But even today, students and teachers of both schools describe constant surveillance, harassment and intimidation by security forces.

But the core of the problem is that neither side can even agree on whether a school like Samphan Wittaya is part of the problem or the solution to the insurgency.

Samphan Wittaya is a private Islamic school that comes out of the Sha'aﬁ tradition. It is not a Salaﬁ/Wahhabi madrasa, nor does it espouse the fanatical ideology of Jemah Islamiyah or the Islamic State. That said, Samphan Wittaya, like Thammawittaya, is a very conservative school and the Sha'aﬁs in southern Thailand and Malaysia have become increasingly pious and orthodox.

The Thai government and army see the school as the root cause of the problem. Despite the sign and slogans in Thai and the Thai ﬂag ﬂying in front of the school — the only one that I saw in the entire town apart from the police post — security forces still believe that the school is fuelling the insurgency and providing the movement with ideological succor and indoctrinated youth. The number of such private Islamic schools that teach in Malay is growing and creating a new generation that has become unassimilated into the Thai nation state.

Thai ofﬁcials warn that the heavily weighted Koranic education dominates the curriculum and that the national curriculum is under-taught or not taught at all. This makes the local Malays uncompetitive for nationwide exams and limits their career prospects, creating another cycle of frustration and aggression. Narathiwat and neighbouring Pattani are the third and second poorest provinces in Thailand, but it is in educational achievement that they truly lag.

And that has always been the crux of the problem: the Malay are the only minority in the country that have refused to assimilate into Thai society. Hill tribes, Lao, Shan, Khmer all assimilated for the sake of citizenship. But many Malay do not see much space for them in the construct of the Thai state: the monarchy (a Hindu god king), religion (Buddhism) and the nation (dominated by ethnic Thai), whose southern border was codiﬁed in 1909, and which Pattani nationalists believe to be occupied territory.

So any school that reinforces a separate identity is deemed a threat to security. It is that same reason that insurgents have killed 179 teachers since the start of 2004 (10 in 2014 alone) and torched almost 200 schools, including six in October 2014: the schools are the primary agents of assimilation.

Buddhists comprise roughly 20% of the 2 million population of the deep South, though the RTA estimates that it is actually down to 10%. While that is unlikely, it is clear that there really are few mixed communities left in the countryside. Buddhists live in heavily defended enclaves or have moved to the cities. Coupled with the low birth rates among Buddhists and high birth rates among the Malays, Thai security forces fear losing hold of the entire countryside.

Cho Airong is a case in point. There is one small Buddhist community left, but they live in their own enclave tucked behind a garrisoned wat, which has been bolstered by a development project that brought in some 30 families from Isan and established a heavily subsidised demonstration farm. Without this, and the added security presence to defend them, the Buddhists would have ﬂed long ago.

But for the Malays, Samphan Wittayah is the hope to end the insurgency. It is where they can study their religion, learn in their native tongue and reinforce their Malay identity. Without this space to be Muslim Malay in Thailand, they would all pick up arms and join the insurgency.

What Malays often complain about to me is that there is nothing equivalent to the concept in Indonesia's founding ideology, Pancasila, of "unity in diversity".

Today, there is an uneasy peace. Samphan Wittaya is expanding. A new building is going up to accommodate growing enrollments. But government ofﬁcials believe that insurgents compel families to stop sending their children to state schools, or families have done so simply because state schools have been weakened by arson and violence against teachers. At the same time, violence across the South has dropped, and from August through October it was at historical lows.

Peace talks are a long way off and the two sides have fundamentally different deﬁnitions of peace. While the Thai government is content with violence being at acceptably low levels, the Malays want the right to expand schools like Samphan Wittaya without any fear or harassment. Thais seek to fully integrate the school into the national curriculum to end the poverty that has fuelled endemic violence across the deep South. Short of that, the Education Ministry has established a programme to run 33 tutoring centres across the South to help students compete in exams.

But the one thing both sides agree on is that if their vision isn't realised, schools like Samphan Wittaya may produce the next generation of insurgents.