The recent talkfest at the 25th Asean summit concluded with numerous lofty declarations. The Nay Pyi Taw Declaration on the Asean Community's Post-2015 Vision contains guidelines for the drafters of the 2016-2025 vision, one of which is to promote Asean as a "rules-based community bound by shared principles, values and norms". 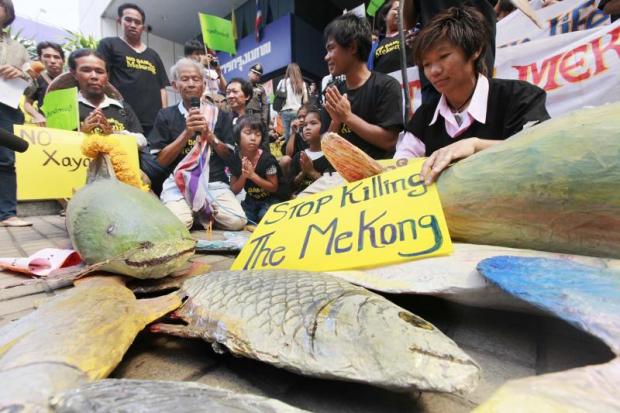 Villagers from eight provinces along the Mekong River rally against the construction of the Xayaburi dam. The dam not only risks damaging the Mekong's ecology and peoples' livelihoods, but also Thailand's relations with neighbouring countries. THITI WANNAMONTHA

Another ambitious goal, contained in the Asean Joint Statement on Climate Change 2014, was "to pursue low carbon development opportunities". Thailand's Energy Minister Narongchai Akrasanee might take note as he pushes to expand coal-fired electricity generation in the upcoming Power Development Plan 2015-2035 "because it's cheaper".

Yet another bold Asean dream was to achieve the "early conclusion of a Code of Conduct on the South China Sea", to curb Beijing's territorial expansion ambitions. Good luck on that one. To be sure, China is happy to keep talking, all the time it's merrily building concrete outposts on every reef and semi-submerged isle it can find, while fracturing Asean solidarity by turning Laos and Cambodia into client states, with Myanmar and Thailand not far behind.

In spite of the summit's many high-minded commitments to shared principles and sustainability in all shapes and sizes, there was not a single official mention of one of the most contentious issues presently confronting Asean solidarity — the exploitation of the lower Mekong River, for hydropower, without any regard for the trans-boundary effects on downstream neighbours.

And it's not just Mekong-inspired conflicts that Asean should be concerned about. Chinese and Thai companies, hand-in-hand with well-connected Myanmar politicians, are queuing up to dam the Salween River and the Irrawaddy, not to mention the irreversible damage that China has already inflicted on the lower Mekong with its cascade of hydropower dams on the river's upper reaches.

And at Don Sahong, also just inside Laos near the Cambodian border, another dam project is in the making by a Malaysian company, reportedly a front for a Chinese hydropower giant. Studies warn the dam site will block the only channel available for dry-season fish migration. No wonder the project has drawn thousands of Cambodian protesters and more than 200,000 global citizens have signed a WWF petition.

These are the hard realities testing Asean solidarity that no one wants to talk about. The need to sacrifice short-term national interests in the name of sustainability and regional harmony.

Is Thailand up to the challenge? Is our reform-minded government sufficiently open to the needs of its own citizens and those of our neighbours as we set out on this unusual journey of redesigning the Kingdom's national architecture?

If it is, then the most complex issue on the nation's energy reform agenda — with long-term ramifications on fundamental relations with three fellow-Asean members — must be the Xayaburi hydroelectric power project in Laos.

The project poses an imminent threat to the livelihoods of 20 million Thai people and 40 million Cambodian, Lao and Vietnamese citizens. It is also an ecological disaster in the making.

That's according to the world's largest conservation organisation WWF, one of only a few environmental NGOs that supports sustainable hydropower projects that meet internationally-accepted, independently-certified Environmental Impact Assessment (EIA) criteria. The Xayaburi dam, of course, does not meet any such criteria, which is one of the reasons why it is widely regarded as one of the potentially most damaging dams currently under construction anywhere in the world.

One wonders if Prime Minister Prayut Chan-o-cha will face any awkward questions from his Vietnamese counterpart when he visits Hanoi on Friday. For example, Vietnamese Prime Minister Nyugen Tan Dung might be wondering why his country should proceed with PTT's giant petrochemical refinery project when that very same company is the second largest shareholder in the Xayaburi project and Thai government agencies are its prime enablers.

Speaking at the last Mekong River Commission (MRC) Council meeting in Ho Chi Minh City, the Vietnamese prime minister said 27% of the country's GDP, 90% of its rice exports and 60% of its seafood exports are at risk if the Xayaburi dam is completed, because the disruption of sediment flows will threaten the integrity of the Mekong's delta region, Vietnam's breadbasket.

Prime Minister Prayut might need reminding that on April 15, 2011 the government of Vietnam made a plea for "the decision on the Xayaburi hydropower project as well as all other planned mainstream hydropower projects be deferred for at least 10 years".

This was Vietnam's official response to the MRC's consultation and agreement process, mandatory for all mainstream projects under the 1995 Mekong Agreement, signed by the four lower Mekong riparian countries. Soon afterwards, the Lao government unilaterally declared the consultation process to be finished.

Based on this decision our own government approved the power purchase agreement for the Xayaburi, despite ongoing strenuous objections from both Cambodia and Vietnam.

Prime Minister Prayut's Cambodian counterpart is surely equally concerned about the apparent imbalance of mutual interests. Why should Cambodia satisfy Thailand's intense interest in the strategically important Joint Development Area for offshore oil and gas exploration when Cambodia's objections to the Xayaburi so clearly fall on deaf Thai ears?

To resolve these tensions with two of our key Asean partners, Energy Minister Narongchai and Deputy Prime Minister for economic affairs MR Pridiyathorn Devakula should persuade the cabinet to order the immediate suspension of the Electricity Authority of Thailand's power purchase agreement for the Xayaburi hydropower project, in order to halt construction of the first dam on the mainstream of the lower Mekong River and avoid this socio-economic and ecological disaster.

There are three main reasons why our government should take this bold, and in terms of Asean solidarity, ground-breaking initiative.

First, the Xayaburi will have significant trans-boundary consequences for 60 million people in Thailand, Cambodia, Laos and Vietnam, all of whom depend on the Mekong River's inland fisheries, the world's richest. This puts Thailand's relations with its fellow Asean members at direct risk.

Second, although this is a "run-of-the-river" dam which will have a limited impact on the hydrology of the Mekong River, it will still create a more than 60km-long in-river reservoir that will have a permanent impact on migratory fish populations and sediment flows.

The concept of a so-called transparent dam with no impact on sediment flows and fish passage has never been successfully implemented in a large tropical river anywhere on the planet. Internationally-accepted, technologically-proven solutions for mitigating the Xayaburi dam's effects on fish migrations and sediment flows simply do not exist.

Third, Thailand does not need the power that will be generated by the Xayaburi dam and halting its construction will have no impact on Thailand's electricity supply when it is scheduled to be completed in 2019. That is because there are many other more sustainable options to meet Thailand's power needs that can easily match the potential output of Xayaburi. Thailand's new Power Development Plan, currently being drafted by the Ministry of Energy, could easily replace the Xayaburi's projected 1,260MW with less damaging Lao hydropower projects situated on tributaries of the Mekong River.

Our prime minister might also need reminding that there is still time to stop the Xayaburi project. Construction of the dam across the main body of the Mekong River is not scheduled to start until early 2015. However, once this construction begins, the dam will cause irreversible ecological and hydrological damage throughout the entire lower river basin system.

Kraisak Choonhavan is former senator and Senate Chairman of the Committee on Foreign Affairs. The second part of this article will be published tomorrow.