With elections planned for this time next year, Myanmar's future is at a critical crossroads. At the same time, there is increased confusion over attempts to change the constitution and introduce proportional representation rather than the first past the post system as in previous elections.The speaker of the lower house Shwe Mann has announced there will be a referendum in May next year on some proposed amendments to the constitution, but that the charter will remain relatively unchanged before next year's election.Meanwhile, the National League for Democracy (NLD) is continuing its campaign to change the constitution, although it concedes this is unlikely before the next election. 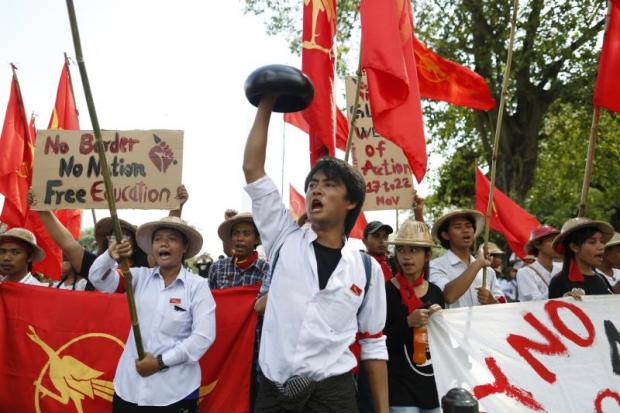 A Myanmar student carries a monk's alms bowl turned upside down over his head, a symbol of protest during a rally against education laws in Yangon. Social and political tensions in Myanmar are escalating and demonstrations have become an almost daily event. REUTERS

They are anxious to reduce the military's role in Myanmar's political future and remove Clause 59(f), which effectively prevents Aung San Suu Kyi from becoming the next president; it bars anyone with a foreign partner or children from becoming president.

Recently the NLD admitted that it had little prospect of accomplishing this before the next elections. "Mathematically, we cannot win the fight to change key sections of the constitution," NLD spokesman Nyan Win said.

That is because the military holds 25% of seats in parliament, and virtually exercises a veto over any constitutional amendments; anything agreed by parliament has to be put to a plebiscite before the constitution can be changed.

But with elections looming in 12 months' time, social and political tensions are escalating. Social unrest has peaked — with strikes, community action against the seizure of farmers' land and demonstrations almost a daily event. Earlier last month students took to the streets in vast numbers to protest against the passing of the National Education Bill without their being consulted beforehand.

There is a growing undercurrent of nationalist sentiment throughout the country; coupled with growing fears of increased communal violence — between militant Buddhists and Muslims — especially in the lead-up to next year's elections.

"It's a very dangerous and critical time for our country," said Zarganar, a renowned comedian and former political prisoner, who advocates dialogue rather than confrontation to solve the country's problems. "As the South African leader Nelson Mandela said: 'This is a long walk'," he explained in an interview. "The vision for the future needs to be in 2020 — not 2015," he said. "The next elections will only be a further step towards full democracy."

While growing social unrest and political tensions engulf the country, Myanmar's president, Thein Sein, is paralysed and increasingly under fire for his failure to push through his economic and political reform process.

Myanmar's early promise, which raised international expectations after the current quasi-civilian government took office nearly four years ago, has been dashed. And the country's political crisis is deepening every day, as the planned elections in 2015 cast a long shadow over future stability.

While many Myanmar government leaders admit that there is still much to be done, especially in education, health and social welfare, many observers are beginning to doubt Myanmar's claims to have set the country on a path of democracy, freedom and economic liberalism. There are few tangible results from the political and economic reform process started nearly four years ago, when Thein Sein became president.

"Even though there may be some moves that seem to be backsliding, in my view they are the reality checks we have to face on the bumpy road to democracy," the president's chief political adviser, Ko Ko Hlaing told me recently.

"No reform in the world has ever been flawless and smooth. Compared to other transitions — like Indonesia and Korea in the early years of their reform — ours is much better and more peaceful," he insisted.

But the reality is that Myanmar's political and economic reform process has run aground. Thein Sein's government has been virtually impotent for months, with little progress to show, despite the talk of the reform process entering its third stage. In fact, the roll-out of new mobile networks has hit significant snags, the much-trumpeted peace process is beginning to unravel and foreign investment is stagnant.

The country's pro-democracy leader and head of the opposition NLD, Aung San Suu Kyi, put it bluntly earlier last month at a press conference on the eve of the East Asia summit, when she warned Western powers that they had been too optimistic and gullible in believing Thein Sein was committed to the transition to democracy.

"If they really study the situation in this country they would know that this reform process started stalling early last year," she said. "In fact, I would like to challenge those who talk so much about the reform process, [to say] which significant reform steps have been taken within the last 24 months?"

There is no doubt that for more than a year now, the reforms have indeed stalled. Few concrete decisions are being made, and any economic progress that may have been achieved in the first two years of the Thein Sein government has petered out. Even the president's political advisers admit the reform process has lost momentum.

"The third wave of reforms announced by the president earlier this year are intended to reboot the slowing reform process," said Ko Ko Hlaing. "The government is trying to boost both public- and private-sector support for the reforms, having realised now that the government elites alone cannot complete the whole transformation process on their own."

"There is no such thing as a real reformer in the cabinet," said a senior media editor close to the government, on condition of anonymity. This is a view endorsed by Ma Thida — a renowned writer, human rights activist, editor, medical doctor and former political prisoner, whose pen name is Suragamika, meaning "brave traveller".

"Myanmar is still not yet in a transition period; the best that can be said is the government is trying to reform."

Amid the inertia, the biggest problem is that farmers and poor people in urban areas have not reaped any benefits from reform. "For them, there has been no democracy dividend," said Khine Win, a social commentator and head of  Myanmar NGO, the Sandhi Governance Institute.

"The gap between the powerful and the powerless is extremely wide and it's growing wider all the time. The resources are concentrated in the rulers' hands, with daily land grabs constantly exacerbating the situation."

"We want democracy, we want freedom and we want a better life," said taxi driver Win Lwin, who lives on the outskirts of Yangon. "But since this government came to power, prices have risen — my rent has doubled in the last twelve months, there are more shortages of electricity and work as a taxi driver is even harder," he said.

Now all eyes are on 2015, with most people hoping that the next election may bring about what everyone craves — a final end to military rule.

"It's what everyone wants — and is why Aung San Suu Kyi remains popular," said Khun Htun Oo, the leader of one of the largest ethnic political parties, the Shan Nationalities League for Democracy.

So the old conservative nationalists, currently controlling the government and the pro-democracy liberals, who want a speedy transition to a civilian democracy, are likely to still be pitted against each other in parliament after the next elections, leaving Myanmar's political future uncertain.

Larry Jagan, a former news editor for Asia at the BBC, is a freelance journalist and author of several books on Myanmar.

WASHINGTON: The United States demanded a "robust and clear" international probe into the origins of the coronavirus pandemic, as a team of World Health Organization experts in China waited on Thursday for approval to begin its long-awaited Covid-19 probe.

The government reports 746 more local infections detected and 10 imported, raising the total to 16,221.