Development forges on, but at what cost?
Opinion

Development forges on, but at what cost?

US President Barack Obama on Tuesday used his executive authority to impose an indefinite ban on oil and gas exploration in Alaska's picturesque Bristol Bay, home to beluga and killer whales and the endangered North Pacific right whale. 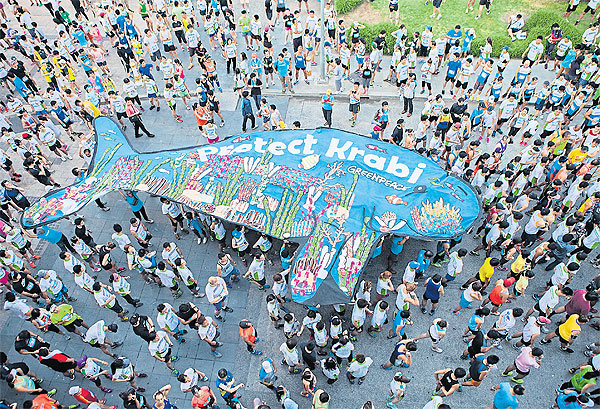 More than 1,500 people unfold a dugong-shaped banner with a message to ‘Protect Krabi’ at a mini-marathon organised by Greenpeace. The event was part of a campaign to safeguard the biodiversity of Krabi from a coal power plant and coal sea port project. GREENPEACE

It is also one of the country's most productive marine habitats, hosting one of the largest runs of sockeye salmon in the world.

In a video announcing his decision, the US president said: "It is a beautiful natural wonder, and it's something that's too precious to us to just be putting out to the highest bidder."

Earlier in 2010, Mr Obama also banned oil rigs in the ecologically sensitive area of the Bering Sea, home to an important population of whales, seals and sea lions.

Comparing the US with Thailand and Mr Obama with our own prime minister may not be entirely fair. Nevertheless, it is tempting to imagine what it would be like if Thailand had a leader who appreciates nature as Mr Obama and some other foreign leaders do.

Might it be possible that industrial development planned for the country, particularly the southern peninsula, be scaled back or even abandoned for more nature-friendly development?

Thailand has some 2,600 kilometres of coastline spanning 24 provinces and covering 316,000 sq km of fishery grounds. About 1,700km or 65% of the coastlines are in the southern region.

The Thai seas are a source of food not just for domestic consumption but for the whole world. And as everyone knows, a whole lot of tourists are attracted to the southern region for its beautiful beaches, islands and underwater world.

The majority of southern people make a living through fisheries, agriculture and tourism. If asked, they will tell you they are satisfied with the way things have been going, even if it does get rough at times.

They are proud of their heritage, cultural uniqueness and languages. They would jealously guard their way of life.

But economic planners see something else when they look at the region. They see mineral resources on land and under the sea that must be tapped to increase the nation's wealth.

They see a geographical area that can be connected to neighbours to stimulate economic and industrial activities, generating even more wealth.

But whose wealth is it they are trying to increase anyway? That's the most troubling question that many people, not just those who are directly affected, have in mind. It appears the more the country develops, the wider the income gap becomes.

Speaking to a group of environmental journalists on Monday, community activist Somboon Khamhaeng looked almost despondent when he spoke about the state's attention on his native southern peninsula.

"There are so many industrial projects planned for the south," he said.

There is the "land bridge" project to connect the Andaman Sea and the Gulf of Thailand, providing a shortcut for cargo ships that would otherwise have to make a detour around the Strait of Malacca.

The Irrigation Department plans to construct dams in every southern province despite "no water problem" there.

Numerous industrial complexes will be built to process petroleum from hundreds of oil rigs in the Gulf. And a deep seaport at Pak Bara in Satun will rise from the sea near the pristine Phetra and Tarutao archipelagos.

The port construction will encroach on more than 4,700 rai of the Phetra Marine National Park and will reclaim about 1,000 rai from the sea.

Eight mountains in the area will be demolished to provide rocks for construction. Twenty million tonnes of sand will have to be acquired. A 4km bridge is needed to connect the port and land.

Needless to say, the project will bring about drastic changes to the environment and surrounding communities, and local people have made their feelings against it clear.

But people's feelings matter little in the larger scheme of things. As far as the policymakers are concerned, the development is good for the country and the public as a whole.

The official indifference to local concerns and the current restrictions on public freedom and liberty have conspired to create a feeling of unfairness among local people.

"When someone talks about the environment, they talk about competition for natural resources. That's not how we see it," Mr Somboon said.

"We simply want fairness. So far we have not been treated fairly. We have been blatantly denied our right to participate in the decision-making process.

"It raises a serious question in our mind about the current developmental trajectory.

"Is what we are asked to sacrifice worth the benefits officials claim we will receive?"

The way I see it, the crux of the problem facing local people everywhere in the country is more than just the denial of their public participation rights.

It's the fact that the drive to develop at all costs is being directed by a small minority of power holders.

This drive is what thoroughly deprives people of their most basic right to determine their economic and personal life.

And the worst part is there is no recourse whether we live under democratic rule or an authoritarian regime as we do now.

PARIS: Countries' latest climate plans will deliver just a tiny percentage of the emissions cuts needed to limit global heating to 1.5C, the United Nations said on Tuesday in a damning assessment ahead of the COP26 climate summit.

The Central Institute of Forensic Science (CIFS) is maintaining its push for a law that would require DNA samples collected from criminal suspects to be stored on a central database.

Act now to save Mekong