Can Thailand free its modern-day slaves?

In 1905, King Chulalongkorn enacted an historic law that abolished slavery in Thailand, then known as Siam. The slaves were freed. The US government also ended slavery in America by granting freedom to slaves. 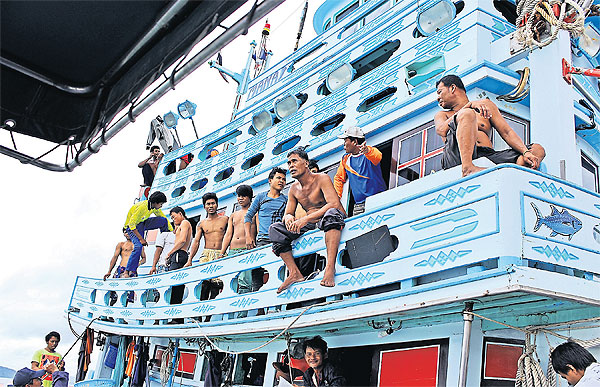 Migrant workers watch from a fishing vessel in Chumphon while Thai officials conduct a raid on forced labour in the fishing industry in the southern province in September last year. Amnat Thongdee

Sadly in 2014, people who are referred to as "modern-day slaves" cannot expect to be freed like the slaves of a century ago.

The victims of slavery in the past were not rounded up, shamed, detained and deported to their countries of origin, unlike those who are currently toiling as forced labourers in the sex industry, on fishing boats or in factories.

In 2001, when the Thai government was first assessed and graded by the US on its response to the issue of "human trafficking", it was given a Tier 2 status. That meant "satisfactory but could do better" in terms of the Trafficking in Persons (TIP) report.

In February 2008, Thailand passed the Prevention and Suppression of Human Trafficking Act.

Two months later in April 2008, the new law's weaknesses were demonstrated with terrible consequences. Fifty-four migrants from Myanmar suffocated and died while being transported to Ranong hidden inside a cold-storage delivery truck.

It could be said that the new law and enforcement measures contributed directly to their deaths. This is because increased punishments, penalties and stricter border controls associated with combating human trafficking saw a change from open transportation to closed; and longer journeys resulted in diversions from normal smuggling routes to avoid checkpoints.

In addition, the law led to higher costs for transportation and employment for migrants carrying out a range of occupations, including sex work. Many were forced to borrow money and the time it took people to repay loans and clear their debts became longer. This increased migrants' ties and indebtedness to employers and brokers.

Thailand was soon downgraded to Tier 2 Watchlist status (below satisfactory — needs urgent improvement). Corruption and failures in law enforcement were the key reasons for the lower grade.

The amount of bribe money demanded to ensure protection by the authorities rose alongside the risk of being caught and the possible penalties. People convicted of trafficking can be jailed for four to 0 years and pay fines of 80,000–200,000 baht. If they have authority over the trafficked person, such as guardianship, imprisonment can be six to 12 years and the fine 120,000–240,000 baht.

Recently, in Bangkok's Patpong red-light district, a situation involving the police and military was exposed when vendors talked to the media about the extortion they regularly faced. Soon after the military admitted that police had been collecting money. Several arrests were made, including that of a deputy inspector at the Anti-Human Trafficking Division. The incident confirmed that bribery exists at many levels of government.

Thailand has a choice of whether to save face or face the problem. The country's TIP Report grades have continually fallen and in June 2014, it was given the worst grade, Tier 3 (indicating failure and the fact that sanctions may be put in place).

Once again one of the main reasons for the downgrade was corruption. The grade has caused the government embarrassment and concern for the image of Thailand.

Now there are just three months to report on progress to fix the problem before the deadline for TIP submissions in March 2015. This means the government has to rush to produce results to save face and improve the country's tarnished image.

The government must now review the past to see exactly how Thailand stands in the eyes of the world, and why.

The media portrays human trafficking in a one-dimensional way. We see police carrying out raids and apprehending captive women. The women are seen being stood over and herded like inanimate objects, not treated with dignity and respect as people. Rather than solving the problem of "trafficking", we see the continuation of human rights abuses.

Understanding of  "human trafficking" among officials remains unclear, so police, for example, search for evidence in the handbags of the women they capture. They find "evidence" such as condoms that were given out by the Ministry of Health in cooperation with the Global Fund for HIV/Aids programme.

The first step must be to admit we cannot efficiently combat trafficking without reducing corruption. We must reflect on whether our traditional approaches to forced labour and prostitution are largely based on moral judgements and religious beliefs. Are such traditional judgements and beliefs really capable of answering the problems of modern society?

Morals change, society changes and laws must also move with the times. It was once moral and good for teachers to cane their students — now laws protect children from such abuse. Acting from a point of respect for human rights is one way to ensure equality and justice for all, regardless of different morals and religious beliefs.

For example, countries such as New Zealand have reduced corruption and almost eliminated exploitation in the prostitution industry by replacing prostitution under criminal law with labour and civil laws. The country is on Tier 1 (excellent) of the US TIP report. There has not been a single incidence of trafficking in the sex industry in New Zealand since 2003.

Respect for the basic human rights of women to work without fear of abuse by employers or the authorities enabled the New Zealand government to address the problems of exploitation, corruption and human trafficking.

We also need to reform our legal processes. To do this, we need to define clearly who the perpetrators, criminals and suspects are. These are the only people who should be punished under the law.

We need to check if our justice processes are being followed. Both punishments and protections are meted out by laws on human trafficking. So does a person charged with a crime get both? Do they get real justice or not?

There is little attention given to, or any reporting on, the sections of the law which are meant to offer protection, assistance and benefits to those affected by crimes.

It is also time to change enforcement practices of the Human Trafficking Act. In the first instance, the raids must stop. During raids, women who are supposed to be being helped are treated inhumanely, with police acting like these victims have committed a capital offence. This should not happen in any civilised country.

More importantly, officials must stop giving permission for the media to report on investigations, publishing details and photographs. This contravenes Article 56, Sections 1, 2 and 3 of the Human Trafficking Law, regardless of whether the trafficked person gives consent or not.

Finally, there is a need to investigate and report openly on the fund for victims created under the Suppression and Prevention of Human Trafficking Law in 2008. So far, there are no reports to show how this fund is used to benefit trafficking victims.

The way that Thailand deals with modern-day slavery is anti-human. So how can we emphasise the "human" in "human trafficking"? Society feels pity and sympathy for victims, but how can this feeling be translated into real justice?

One hundred and 10 years ago Thailand freed the slaves.

People were given "freedom from" and "freedom to". "Freedom from" forced labour, imprisonment and exploitation. "Freedom to " live and work with dignity. Can Thailand do it again?

Noi Apisuk is a director of the Empower Foundation; Liz Hilton is a programme officer of Empower's Chiang Mai office.