Free speech and the crossing of a line
Opinion

Free speech and the crossing of a line

Within 24 hours of the tragic killings last Thursday at the Paris office of Charlie Hebdo, scores of editorials and commentaries poured out from the media, mainstream as well as alternative, about the need to defend freedom of expression from threats of terrorism. 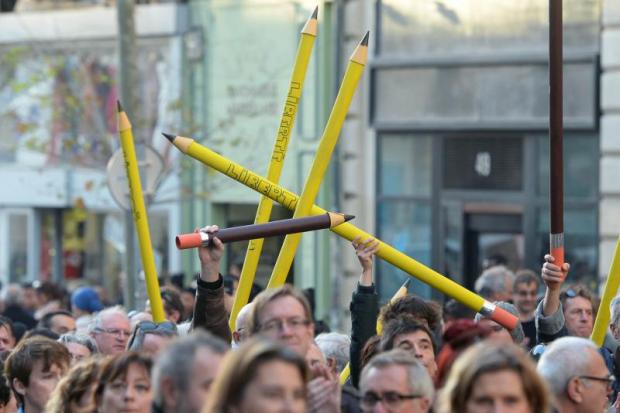 Demonstrators hold giant pencil-shaped objects during a rally in Marseille over the Charlie Hebdo killings. Tens of thousands of people staged rallies across France following terrorist attacks on freedom of expression. AFP

Meanwhile, major Western media outlets such as The New York Times, the Wall Street Journal, CNN and Reuters, among others, came in for criticism from defenders of free speech for self-censorship in their reports of the event.

They hid the problematic image of the Prophet Mohammed published by Charlie Hebdo that allegedly ignited the attackers' anger and the ensuing killing.

Even national leaders like Australian Prime Minister Tony Abbott publicly vowed to stand up for free speech with a memorable quote, "We should not stop being ourselves because of this kind of attack."

The PM's words are indeed telling of a common cultural identity that he feels with the French, the identity possibly shaped by the common race, religion, history, politics and tremendous value placed upon free speech.

Meanwhile, by referring to that collective identity "we", Mr Abbott may have inadvertently alienated those who do not share the same social traits as "the others". And from this we may be witnessing a politics of identity being played out on a global scale.

Surely, from a Western perspective, the satirical cartoon representation of the Prophet Mohammed as depicted by Charlie Hebdo is regarded as a form of free speech which is a fundamental human right guaranteed in international law like the Universal Declaration of Human Rights, as well as national laws of civilised (mostly democratic) countries worldwide.

Past Thai constitutions also guarantee freedom of expression and freedom of media professionals.

But from the perspectives of "the others", particularly those who profess Islam, this and similar representations published in 2006 by Jylland Postens, a Danish newspaper, such representations may be construed as hate speech. And hate speech laws generally exempt them from free speech protections.

While there is no one universally accepted definition, hate speech is generally understood as speech or any form of expression that promotes discriminatory attitude and action, or even incites violence against a person or a social group on the basis of national origin, ethnicity, colour, religion, gender, gender identity, sexual orientation, disability, or any socially divisive character. Hate speech varies from verbal attack, threats, insults, to even humorous ridicule.

Hate speech laws are most evident in Europe, possibly due to the experience and ramifications of the Nazi hate propaganda that led to the Holocaust and the more recent ethnic violence incited by state media in the former Yugoslavia.

Although national laws vary, all EU members are required to minimally observe the European Convention of Human Right in Article 14 and 17 which address prohibition of discrimination and prohibition of abuse of rights.

Even in Europe, where hate speech is quite clearly understood, the enforcement of hate speech laws has been problematic. On the one hand, free speech advocates feel that disproportionate application of hate speech law may harm freedom of expression. The case in point is criminalisation of religious insult which has risen in number in recent years and is usually seen as efforts to cope with Islamic extremism.

On the other hand, those who are affected by hate speech feel that the strict interpretation that hate speech must be directed against a person or a group may be oblivious of speech that intentionally offends religious feelings but may not have a living person or group as a target. The case in point, of course, is the constant insult and ridicule made against the Prophet Mohammed in Western media.

In 2012, a low-budget anti-Islamic film, "Innocence of Muslims", which directly insulted the prophet Mohammed was uploaded on YouTube.

Despite several angry outcries against the film and one in which a US ambassador to Libya was murdered, YouTube turned down the request to take down the video claiming that it did not fall into its hate speech classification since the story was not about an actual living person or group that professes Islam. Eventually, after more wrought havoc, YouTube agreed to block access to the video but only in countries that are populated by Muslims.

Similarly, Muslim groups and organisations have filed lawsuits against Charlie Hebdo on the same ground but their cases were dismissed for similar reasons as above.

Interestingly, famous singer Bob Dylan was a few years ago investigated in France for "incitement to hatred" against Croats for comparing their relationship to Serbs with that between Nazis and Jews in an interview. His case was dropped, however, in April 2014.

Free speech or hate speech, the use of violence can never be justified, and the Charlie Hebdo killings must be unconditionally denounced.

Nevertheless, we must separate the issue of the use of violence by Islamic extremists from the issue being discussed here — the dividing line between free and hate speech, particularly when it comes to religious beliefs.

In this globalising world that is being ripped apart with conflicts and misunderstanding, it may do a service for the media to start exercising more "empathy" and respect for others' differing beliefs and values.

After all, Western media always argue for freedom. But they should also start asking themselves how much degree of freedom they can afford from dominant ideologies that prevail over the Western world like Islamophobia. Free speech is an excellent idea, especially when not guided by prejudice.

Assistant Professor Pirongrong Ramasoota teaches and researches on media, communications and society at the Faculty of Communication Arts, Chulalongkorn University.