Region must act now to save the Mekong from dams
Opinion

Region must act now to save the Mekong from dams

The rich Mekong River is home to vast natural resources and provides food to secure the livelihoods of millions of people. Since the beginning of time, it has served as our mother earth, interweaving and connecting intricate riparian cultures. 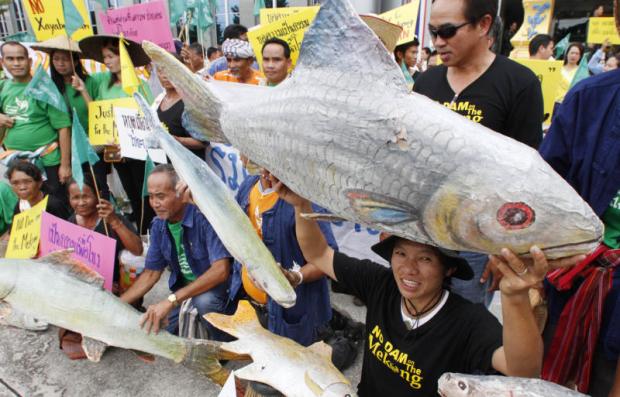 Members of the Network of People in Eight Mekong Provinces stage a protest against the Xayaburi and other dam projects which they say will destroy the Mekong River's ecology and locals' livelihoods. (Photo by Thiti Wannamontha)

For nearly two decades, the onslaught of the Mekong's development by capitalists has spread its destructive wings with dozens of dams being planned on the lower and upper Mekong River mainstream.

The Mekong's transformation has begun to take its toll, beginning with the completion of the first mainstream dam in China's Yunnan province in 1996. Free for millions of years, the river is now blocked. Dams in the upper Mekong have interfered with the river's ecology causing damage to aquatic and plant life. Fishing communities have found their catches decimated and riparian people and their farms are now vulnerable to unnatural water fluctuations.

Problems have multiplied with rapid blasting to pave the way for the navigation of commercial ships, as spelled out in the agreement made by the four upper riparian countries. The installation of six more dams in China, and more to come, shall wreak ecological havoc on the upper Mekong, with far-reaching consequences for the basin.

Despite the enormous impact on the region's people, problems with the Mekong's development have been ignored. No attempts have been sufficiently made by the Thai government and other regional governments to address or prevent these problems.

Sheer energy demand still functions as the main impetus for these dams. The cascade of 12 hydropower projects in the lower Mekong has been pushed forward, in spite of strong opposition from the people already affected by China's dams, who will bear the brunt of the dams' negative effects.

The Xayaburi dam's construction in Laos is evidence of how the procedures spelled out in the 1995 Mekong Agreement have been flouted by the four member countries. Such procedures have simply become ceremonial — a means to justify the righteousness of the project at the expense of our natural resources.

The Xayaburi dam's development process is characterised by unilateral decision-making and back-room negotiations. With no transboundary environmental impact assessment, the dam's construction has ploughed forward. The commencement ceremony for the second phase of dam construction already took place yesterday. For the first time, the lower Mekong will be directly altered.

Don Sahong is the second dam in the pipeline in the lower Mekong. It will block the Hou Sahong channel in southern Laos, bordering Cambodia. Experts from various institutions insist that the Don Sahong dam will adversely affect Mekong fish migrations, from the Delta in Vietnam to Cambodia's Tonle Sap Lake. It will interfere with the reproduction, spawning and growth of migratory fish through the great archipelago.

Since October, the Mekong River Commission and representatives from the four member countries have participated in Don Sahong dam's "prior consultation process", simply to justify the terms set forth in the Mekong Agreement.

During the first two hearings in Thailand, none of the residents living by the river were invited to participate in the five meetings, which were not characterised as "consultations" by the Thai government, but rather "information sharing" and still failed to cover our whole Mekong Basin. In addition, there was no translation of necessary documents, to enable effective participation and ensure that the consultations would rest on a foundation of information and research.

Additionally, the different dams have been sliced into pieces and discussed separately in different forums, making it difficult to comprehend the overall basin-wide picture of hydropower development.

The Network of Thai People in Eight Mekong Provinces and academics stand firm in its staunch opposition to the construction of the Don Sahong and other mainstream dams. We demand that adequate and comprehensive studies be undertaken to explore the dams' impact on the whole basin. Sufficient information must be found to enable those in power to realise what we are going to lose by damming the mighty Mekong. How can we trade our globally recognised Mekong with its complex ecology of hundreds of fish species, and rich food production for the very meagre amount of electricity which can be obtained by other means?

What can we do to ensure sustainable, fair and balanced management of the Mekong? The question has lingered in the hearts and minds of the people of the Mekong for the entire time that they have been affected by the impact of these projects. Such losses have prompted them to speak up and demand participation in the decision-making process regarding the Mekong's development. The Mekong's fate can't be left in the hands of a few influential people and big corporations who want to prey on the lucrative gains from Southeast Asia's resources.

If the government continues to ignore the Mekong's problems, the dams will block the main vein of the region without any justice done. Today, the Mekong River Commission Joint Committee will hold a session to conclude on Don Sahong dam. Thailand must demand Don Sahong and other mainstream dams be cancelled.

Niwat Roykaew is chairman of the Chiang Khong Conservation Group and plaintiff in a case involving the Xayaburi dam power purchase agreement, now before the Thai Administrative Court.

Nail in coffin for Lao dam?