Irritation as Thailand loses its charm

As Thailand reels from US diplomat's criticism, the need for both parties to engage in productive bilateral relations is made more apparent

To the astonishment of many, the Thai elite often feel bitterly disappointed whenever their dearest and closest friends, like the US, publicly express disapproval of “national affairs”. 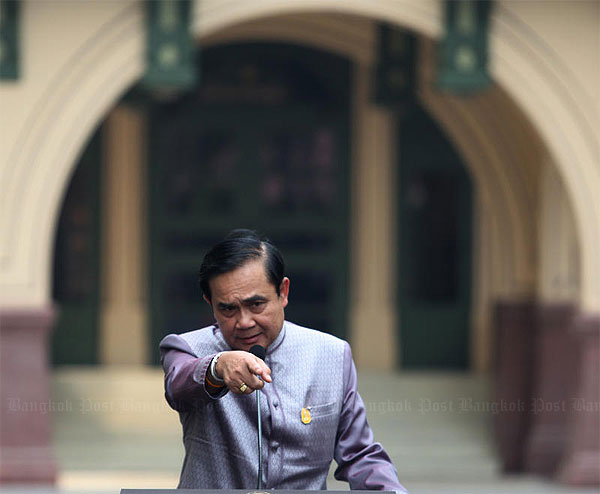 POINTING THE FINGER: Prime Minister Prayut Chan-o-cha's regime has been accused of reacting in a childish manner to criticisms from the United States.PHOTO: Thiti Wannamontha

From Prime Minister Prayut Chan-o-cha to his colleagues in the super-cabinet National Council for Peace and Order, the coup-installed National Legislative Assembly or civic groups and netizens, US "interference" in Thai matters often draws a steady stream of outrage.

Comments made by US Assistant Secretary of State Daniel Russel during his recent visit to Thailand were no exception, with even the Suan Dusit Poll quick to cite data which it said indicated broad public support for martial law remaining in place.

Thailand and the US share a long-standing friendship that spans more than 180 years. Since the signing of the Treaty of Amity and Commerce in 1833, the partnership has developed and strengthened across a range of issues, including education and culture, public health, business and trade, as well as security and military cooperation.

The May 22 coup is not the first time the US has seen the military seize power in its Southeast Asian partner, but it appeared to catch Washington by surprise.

To be fair, the Obama administration has realised that America's gradual shift from its old connections in the military-elite-based factions to more popular-based political groups did not fully fit with US interests. Hence it has been "rebalancing", reaching out squarely to the vested groups inside the countries with which they are involved — Thailand included.

But the US itself has been distracted by problems within the White House and State Department — Thailand has lost its charm and has been off the radar for a long while. The US has been clumsy in its reaction to the turbulent political violence and vague in determining its position towards Thailand amid the sensitivity of the looming royal succession.

There was also the stark contrast provided by Barack Obama as he shook hands and embraced then-premier Yingluck Shinawatra when he visited Thailand in 2013, but did not make time during his recent Apec trip to meet Gen Prayut.

Half a year of no contact should be enough to restart communications at a slightly higher level, and the visit by Mr Russel last week should be regarded as a positive gesture. After all, diplomats from both countries realise full well that the two nations are inseparable, no matter what.

Mr Russel is knowledgeable about the region and Thailand; he is not just a career diplomat but part of Mr Obama's advisory team. Foreign ambassadors in Thailand lauded him for his discretion in touching on all fronts of bilateral ties before addressing the thorny issue of the coup.

In fact, during a talk at Chulalongkorn University, he did not use the same blunt tone that he adopted during discussions with Foreign Minister Gen Tanasak Patimapagorn.

"The US does not take sides [in politics] and the future will be drawn upon by the Thai people," he noted.

But further comments by former deputy prime minister and foreign minister Surapong Tovichakchaikul and former education minister Chaturon Chaisaeng, who echoed some of Mr Russel's concerns about the imposition of martial law, have made the junta nervous.

Rumblings of discontent have been heard since the impeachment of ousted prime minister Yingluck, as members of her Pheu Thai Party have come out to criticise the move as "unconstitutional" and "sabotage against reconciliation".

Former Ubon Ratchathani MP Somkid Chuakong and former ministers Pichai Narinthaphan and Nattawut Saikuar both had their attitudes "fine-tuned" by the military after supporting the US comments.

In a way, this is an overreaction from the military government, but it also reflects the junta's fears that its deeply-desired US backing might not be forthcoming, affecting its legitimacy to remain in power for a lengthy period.

The Foreign Ministry's decision to summon US charge d’affaires W Patrick Murphy to appease the fiery mood of Gen Prayut boomeranged; Mr Murphy simply repeated what his boss had said, which echoed comments made by State Department spokeswoman Jen Psaki.

Mr Murphy said the US “continues to work with our ally, remains committed to the Thai people, continues to urge the Thai government to take necessary steps to bring the country back to democracy”.

Ms Psaki said: “Thailand is a valued friend and ally, and we have a range of conversations with them. But those are our positions, the difference of opinion over the issues remains.”

In fact, many people were irritated by America's seemingly weak response to increasingly tense human rights issues and curbs on politicians and activists; those people have now been appeased.

Last year the US was unable to scale back the joint military exercise Cobra Gold, but this year the activity has been substantially scaled down to focus on humanitarian assistance and disaster relief, with the aim of expanding regional cooperation.

Mr Russel simply reflected the unspoken but well-known sentiments and concerns of the large chunk of the Thai people regarding the tightened grip of the Prayut government. The US will still be discreetly dealing with Thailand, however, as it realises the coup has pushed Thailand further towards China's embrace.

The junta has been well received by non-critical China, which has signed a deal to buy Thai rice and will help build massive railway projects connecting the two countries.

But the Thai leaders must not be complacent.

China will almost certainly not back Thailand for its desired non-permanent membership on the UN Security Council in 2017-2018, but will instead vote for its strategic neighbour Kazakhstan. And as for the rail links, China is merely looking to serve its own trade and security interests.

Chulalongkorn University political science professor Surachart Bumrungsuk said he was worried that the naivety of the current Thai leadership on diplomatic affairs would drag down our global clout, which has already been diminishing.

"Throughout history, elites in Thai society have realised we could not ignore Thai-US relations, as it has been the cornerstone of our foreign and security policies," Mr Surachart said.

He said the Prayut administration has been "pouting and childish" about the US remarks.

"The post-coup attitude of leaning towards no-rebuke China … might be a bit off-side," he said. "We should learn the lesson of our neighbour Myanmar that after years of walking in the Chinese shadow, they now have to walk back into the arms of the West."