Prime Minister Prayut Chan-o-cha greets his host, President Xi Jinping, before the two countries held a meeting on the sidelines of the Apec summit in Beijing last November. (Reuters photo)

Industrialised countries have long pushed for multilateral norms that facilitate the liberalisation of international investment. The envisaged multilateral investment regulation, if adopted, will not only impose obligations on individual members to open markets in specific sectors to foreign companies, but can also affect very sensitive aspects such as national sovereignty by diminishing state power to regulate commerce and to support its domestic enterprises. 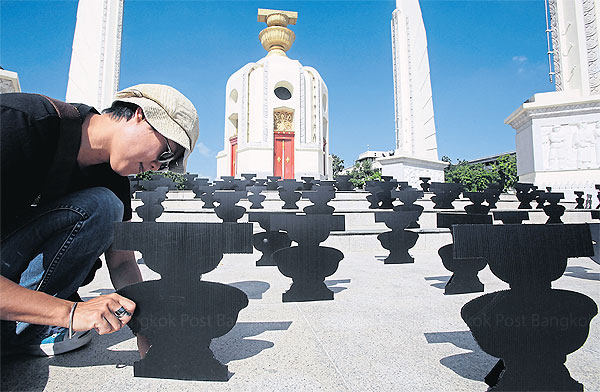 An anti-FTA activist puts miniatures of the symbol of democracy in black in front of the Democracy Monument in 2013. He was protesting against the government's charter amendment effort to speed up foreign trade agreements that would limit nation states from protecting local welfare. Apichit Jinakul

This is the major reason for the developing nations' reluctance to support the establishment of a comprehensive framework for the liberalisation of foreign direct investment (FDI) under the World Trade Organization (WTO) or other forums such as the Multilateral Agreement on Investment.

Developed countries, particularly the United States and the European Union, were clearly aware of the negotiating goals of the developing countries and realise the difficulties in establishing multilateral investment rules. Subsequently, those countries are attempting to push through bilaterally what they cannot achieve at the multilateral level. These efforts include the pending and existing free trade agreements (FTA), like the Trans-Pacific Partnership Agreement (TPP) and the Thailand-EU FTA.

Although most developing countries now welcome foreign investment, they have until recently been wary of inward FDI. Many countries limit or prohibit foreign equity ownership in certain sectors, such as banking, insurance, telecommunication, agriculture and mining.

Some countries do not restrict foreign ownership in certain industries but impose strict conditions on foreign business operators, such as requirements on shareholding proportions or for a minimum number of local directors. The aim of such regulations is to prevent foreign dominance of essential sectors, take into account the public interest, and protect the economic and legal interests of consumers and market competition.

The bilateral and regional investment agreements are treaties between two or more countries in which each agrees to promote and protect FDI in its territory by investors of the other(s). These treaties are negotiated and signed by governments, but provide protection for non-state actors, namely foreign firms and owners of contractual rights. They typically entitle foreign firms from signatory countries to be treated fairly, on par with domestic firms, as well as firms from other similarly protected countries. They also protect contractual rights, guarantee the right to repatriate profits, and prohibit or restrict the use of performance requirements.

Often, the agreements restrict discriminatory expropriation by the host government, as well as policy changes that are not for a public purpose. In case of nationalisation, either direct or indirect, the foreign investor is guaranteed prompt, adequate, and just compensation in accordance with the due process of law.

More recent investment agreements have a broader coverage of investment issues allowing foreign investors to seek international arbitration, as an alternative to local courts, for compensation for the value of assets that were expropriated by the state.

While the legal rules governing expropriation are designed to protect investors against arbitrary government action, problems remain. What constitutes indirect expropriation? Will regulatory measure adopted by the host state constitute an expropriation?

Under the North-American Free Trade Agreement (Nafta) and certain FTAs, the term "indirect expropriation" has been broadly defined by reference to various forms of state activities that affect the proprietary interests of a foreign investor.

The term "proprietary interests" is also given a broad definition covering both tangible and intangible property. This has limited the sovereign power of the state to regulate in the public interest, and allows investors to bring compensation claims against the regulating state.

Since the investor-state dispute settlement (ISDS) mechanism allows investors to bypass obligations to seek a remedy under domestic courts, the number of cases brought under such a mechanism has increased rapidly. In 2009, the total number of ISDS cases was 81. Most of them were filed by investors from developed countries against the governments of developing states.

According to customary international law, only states have locus standi, that is, a capacity to sue or to bring suits against another state before international legal courts.

Typical state-state dispute settlement practice faces massive criticism for being inadequate to protect the interests of investors. Such a dispute settlement mechanism cannot be instigated without the intervention of the home country. Whether or not the home state will intervene under international law depends on a particular political and diplomatic context.

The ISDS proceedings is then viewed as the most appropriate approach to protect investment. The rationale for the ISDS mechanism was traditionally linked to views about the potential impact on foreign investment of uncertainty caused by weak legal, judicial and political systems in host countries. There are widespread perceptions that the decision-making process under the standard judicial system is biased against foreign investors and that the alternative ISDS system will put in place firm rules on the transparency of proceedings and impartiality of arbitrators.

However, the investment chapter under the proposed TPP and the Thailand-EU FTA, if adopted, might place Thailand's substantive ability to protect public interests at risk. They would limit flexibilities that the country currently has under WTO agreements, and, thus, restrain access to essential products, such as medicines, for Thai population.

In addition, the ISDS will make it harder for the Thai government to regulate the essential sectors, and will expose Thailand's legitimate public policy objectives (for example, controls on the sale of tobacco and hazardous goods, and protection of consumers, health and the environment) to challenges by private arbitrators. Foreign companies will be able to exert an influence over the formation of public policy both directly and indirectly.

The Thai government must stand firm in negotiating trade agreements.

It must maintain that investment liberalisation must be done through multilateral negotiations, and that any internationally accepted norms on investment need to address the balance of rights and responsibilities of investors and provide effective mechanisms to control corporate misconduct.

In making decisions with respect to bilateral or regional deals, Thai policy-makers will have to weigh, based on empirical evidence, the economic benefits of such a treaty against the importance of protecting health and social interests of their population.