Democracy must be built on mistrust of 'good people'
Opinion

Democracy must be built on mistrust of 'good people'

On a more serious note, I'm not a constitutional lawyer, so I will try to confine my remarks to observations any reasonably informed layperson might make of this draft constitution. 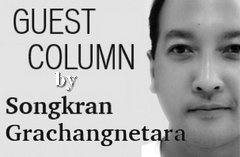 In my view, this draft constitution is also a daft constitution. Why? Well, because right from the start the constitutional drafting process has alienated those in the country who matter most: us. The people.

The Constitution Drafting Committee (CDC) has generated as much public interest as an all-expenses paid invitation to come and watch paint dry. Yes, the government will cite the thousands of forums held throughout the country to engage people in the reform process but the reality is it's been a complete flop. Contrast this to the widespread interest Thailand had when we drafted the People's Constitution of 1997. I'm not saying the 1997 constitution was without flaws; on the contrary, it had many. But you don't tear down the whole house when the roof is leaking do you?

This government should have instead brought back the People's Constitution, which the majority of Thais saw as legitimate, and make amendments to it. By legitimate, I mean it's the only constitution we ever had where the people participated in the drafting process. More importantly, it was a constitution which was not written with any interest groups in mind. The same cannot be said for this constitution.

Apart from legitimacy and the involvement of the people, this constitution has another glaring flaw which I eluded to earlier: the over-reliance on "good people" to uphold and enforce constitutional law. The problem with this is that given the right opportunities and temptations, and devoid of accountability and scrutiny, "good people" often don't remain good for very long. In a society of 67 million people everyone has their own ideas of who is a "good person".

If you ask me, for example, there are many individuals involved in the constitutional reform process who are trustworthy. Dr Jingjai Hanchanlash for one, is someone I have known all my life and trust implicitly. Dr Jingjai has an impeccable record of public service and dedication to his country. He's not only a capable man, but he's also a good man. Trust me, I know. But a society the size of ours can't function on trust.

This constitution is littered with this concept of goodness. Just look at Section 42, which talks about freedom of speech. It says, "A person shall enjoy the liberty to express opinions ..." But, now here is the catch, "except by virtue of law specifically enacted for the purpose of maintaining security of the state ... maintaining public order or good morals or preventing or halting the deterioration of the mind and health of the public".

The term "good morals" is very ill-defined and for all I know my opinion pieces could be interpreted as threats to "the mind and health of the public", as if mere words and opinions can be deadly to society like an airborne strain of the Ebola virus. And even if voices of dissent are able to bring down the pillars of Thai society, then we don't have a very strong and robust base for society, do we?

Therefore, society cannot be built solely around a few thousand words written on a piece of paper. All successful liberal democratic societies are born from a concept. And one of those concepts is freedom of expression. In Thailand, we are going in the opposite direction. Our constitution and society will be based on the freedom of "good people" to express themselves, and everyone else has to take their word for it.

In my opinion, the CDC has become a group of slaves and, as Thomas Paine wrote in The Age of Reason: "I have always strenuously supported the right of every man to his own opinion, however different that opinion might be to mine. He who denies to another this right, makes a slave of himself to his present opinion, because he precludes himself the right of changing it."