Migrants' plight brings out the worst of Thai psyche
Opinion

Migrants' plight brings out the worst of Thai psyche

It would be an understatement to say Thailand is sitting between a rock and a hard place in dealing with the Rohingya crisis. As first port of call for the human smuggling networks, the country serves as a springboard for the migrants to travel to a third country, most likely Malaysia or Indonesia.

Pressures are piling on the government of Gen Prayut Chan-o-cha to provide shelters, at least temporarily, to the desperate migrants. But the government is reluctant and unwilling to commit itself to hosting such facilities.

Malaysia and Indonesia, in the meantime, are under a different kind of pressure. Being majority-Muslim countries, they are expected to help people of the same faith. But they, too, are wary of the possibility of opening the floodgates for new migrants if they agree to accept the boatloads of migrants now drifting on the seas.

Except for the United States, Western nations, including Australia and New Zealand, have been mostly silent on the issue because they, too, have faced similar dilemmas.

Interestingly though, while urging Thailand to provide shelter to the refugees on humanitarian grounds, the US, through Secretary of State John Kerry, has drawn criticism from both Thai and American citizens. The US's promise to lead international efforts to help the Rohinya is likely to stir more opposition at home but is unlikely to quell scepticism and criticism here in Thailand.

As the Rohingya migration crisis draws out, meanwhile, it is quickly becoming a global crisis of conscience.

In Thailand, this crisis of conscience expresses itself widely on social media. The majority mood is grim, anti-migrant, hostile, and at times heavily tinged with a racist tone.

Reading many of the posts and comments, one could easily become swept along with the hostile mood. For the more humanitarian-minded people, it is downright depressing.

The issue has led to strong disagreements among acquaintances and strangers alike.

While it is a depressing phenomenon, the outpouring of hatred, insults and ill-will towards the Rohingya migrants is sociologically bewildering.

Thailand and its people had always been proud of their Buddhist tradition, steeped in compassion and kindness towards the less fortunate. But recent events have shown that legacy is a thing of the past. 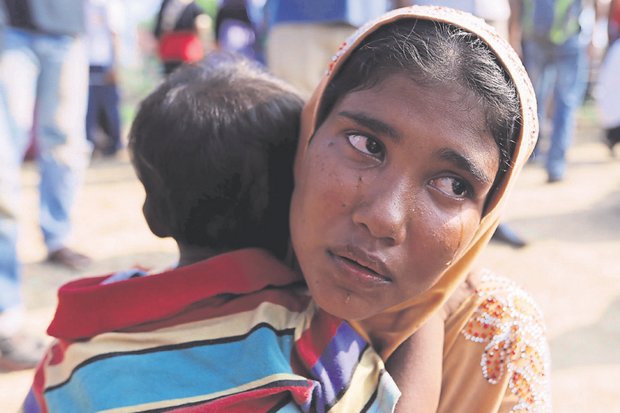 Rohingya Muslim women and children sit in a boat after they were intercepted by the Bangladesh Border Guard in Teknaf, Bangladesh. (EPA photo)

What happened to have turned a once kind and compassionate people into a hard-hearted one?

I admit I have no real insight into the phenomenon. However, the tough economic climate is a contributing factor. Many netizens argue we should help our own first because there are already many poor Thais waiting to be helped. Others cite the economic downturn as a reason the country cannot afford to be humanitarian.

It is reasonable to argue, as some do, that Thailand has done much to provide humanitarian assistance to those in need, including taking in a great number of refugees during the Vietnam War, as well as those escaping oppression in Myanmar. There are reportedly more than 100,000 refugees from Myanmar still living in Thai camps, though funded by international agencies.

For this reason, it is in no position now, economically or socially, to provide assistance to new crops of refugees, especially ones of a religion viewed as prone to causing social conflicts.

I surmise, however, that the root of this lack of compassion goes much deeper. I'm afraid that it is the social system in which we live that has laid a foundation for the cruel transformation of the Thai people's psyche.

This is a system where money is God, where the value of a human being is determined by his or her wealth. So, the lower down you are on the economic rungs, the less of a human being you are. This is a society where injustice is the norm. Everyone competes to be in the position to dictate the lives of others because, once you attain a certain level of wealth or authority, you become almost immune to the repercussions of your actions.

The obscene widening of the income gap, and injustices that led to political unrest over the past decade have helped to stoke the quiet resentment that has been accumulating in the minds of Thai people for quite some time.

Such resentment, long smouldering, has gradually eaten up any compassion left in Thai people's hearts. It is probably responsible for wiping away the famous Thai smiles from our faces, leaving poor imitations of our former selves.

One particular saying that has cropped up increasingly often on social media is indicative of the prevailing mood. When commenting on perceived social injustices, one is wont to say: "It is getting ever harder to live in this country."

Unfortunately, the Rohingya migrants, one of the most desperate people on Earth, have brought out the worst in the Thai people.

Had we been in better economic times or under a more just social system, the Thai people might have expressed their compassion more readily.