Same old excuses given for flooding - so fix them
Opinion

Same old excuses given for flooding - so fix them

Back in mid-March when inner Bangkok was awash after unexpected heavy rain, city governor Sukhumbhand Paribatra foolishly shot off his mouth, telling his critics to "go live in the highlands" if they don't like being flooded.

Although he later apologised, claiming he didn’t mean what he said and was just joking, quite a few netizens and his usual critics were not amused. The governor then insisted that his administration was doing much better, draining off the flood water in just 1-2 hours instead of a few days as was the case 5-6 years ago.

Too much rain in a short time, more than 60mm falling in an hour, and garbage clogging the drains were blamed as the two main factors causing flooding in the city. Does it sound familiar?

Then came Monday morning, when Bangkok suffered under hours of torrential downpour with the hardest hit area being Rama IV, where rainfall was recorded at 141mm/hour. The result, very predictably, was that Rama IV, Asok and Sri Ayudhya areas were heavily flooded – up to knee high at parts of the roads. 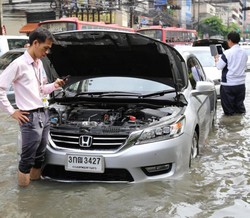 Blue Monday became Black Monday as motorists and bus commuters left home for their offices, or sent their children to schools totally unaware that many roads were under water even though the rain had stopped before sunrise and the dawn sky was clear.

Chaos eventuated as car engines were flooded and they ground to a halt. Those who kept going still came to a stop, unmoving as they became stuck in the traffic gridlock along the flooded roads.

With traffic stalled, the gridlock soon spread to surrounding areas and finally brought almost the entire city to a standstill.

Meanwhile, city workers tried to drain off the flood as fast as they could. And, again, the same excuses were heard. City clerk Sanya Chinimit complained of the same problems which caused the previous prolonged flooding – garbage clogging the drains and just too much rain, above 60mm/hour.

Phoning in from the Netherlands, where he was an official trip to study drainage system, governor Sukhumbhand apologised. However, he still asserted the city administration was more efficient these days in draining off flood water than it was some years ago.

But two major floods in just three months, in the middle of a prolonged summer, would seem too much to bear for quite a few Bangkokians, particularly the Anti-Global Warming Association which has demanded the governor be sacked for incompetency.

Worse still, he was not around when he was most needed. Had he been in Bangkok and actually ventured out to supervise city officials at work, the criticism of him would have been less hostile.

What is beyond comprehension is that the city administration knows well about one of the two problems blamed for the flooding in the city – uncollected garbage clogging the drainage system. If the problem cannot be resolved by City Hall, then why not let somebody from outside help out, somebody with the right experience?

The rainy season is not with us yet. Bangkok still has that to look forward to. So how many more times will we hear the same, lame excuses from the city's administrators before the problem is solved?