So, gambling is in my blood. I never knew that. Thanks to Pol Gen Somyot Poompunmuang, the national police chief. Last week he said gambling is in the blood of Thais and he would become the first police chief to dare to declare his support for legalising casinos.

He also made several more interesting remarks which help us see the "real" Pol Gen Somyot, who has been hiding behind his police uniform all these years.  Such remarks include: "About one month before my retirement, I will open a website, Somyos@forCasino.com to gauge public opinion about legalising casinos in Thailand"; "NGOs are not my father!" (Does that sound familiar? Didn't someone blurt out "The UN is not my father" some years ago?); "I am a guru of gambling".

All of a sudden, Pol Gen Somyot appears to be a fearless crusader for legalised casinos in this country, shrugging off criticism being heaped upon him from members of the public who are against his idea.

"NGOs are not my father!" came from the mouth of an annoyed police chief when asked by a reporter whether he feared an NGO backlash for his call to legalise gambling dens. Regrettably though, the reporter did not follow up with another more pertinent question: "If he is not afraid of anyone, why doesn't he strip Thaksin (the fugitive former prime minister) of his police rank?"

Besides being numero uno in the police force, Pol Gen Somyot is well known among stock brokers and stock speculators as a big investor. Many watch closely and follow his lead in trading, frequently jumping on his bandwagon.

The police chief made newspaper headlines late last year when he and his family spent 855 million baht on 2.5 billion shares of AQ Estate Company. He defended the transaction as just a normal investment in the stock market.

A few questions have been raised about the police chief's sudden crusade to become the first police chief of this country to recognise the evasive reality of Thai society — that gambling is in the blood of Thais and that casinos must be legalised. What is his motive? Is it meant to draw attention from Thaksin's police rank issue? Why didn't Prime Minister Prayut Chan-o-cha stop him? Does the police chief have the backing from someone powerful? 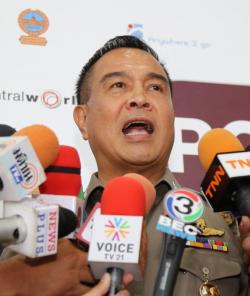 The premier, who is also head of the National Council for Peace and Order, has made it clear he will proceed with the case if it is received from the police. But if the police do not submit the case to the prime minister, how can he take it to the next stage?

Remember what Pol Gen Somyot said recently? He said he would have to be cautious about the case because he does not want to spend time in the courtroom after his retirement. My response is he will procrastinate over it until he sheds his uniform, and in the meantime carry on stirring up the casino issue.

Do you want to bet that my conclusion is wrong? (Sorry about that. Betting, as you know, is in my blood.)

Pol Gen Somyot used to say he was answerable to only two bosses — Gen Prayut and Deputy PM and Defence Minister Prawit Wongsuwon. Perhaps the media should be asking Gen Prawit what he thinks about the police chief's crusade on casinos, which has zero relevance to the reforms needed by this country and which are being worked on by the National Reform Council and others.

The 12 NRC members led by Maj Anan Watcharothai, who first broke the controversy on the casino issue, appear to have lost touch with their assignment given by the NCPO, and are irrelevant.

Will the NCPO summon these distracted council members and the police chief for attitude adjustment to bring them back into line before their terms in office expire in a couple of months?