The military court's decision to release the 14 students of the New Democracy Movement (NDM) is a win-win move for both the military regime and the young activists.

The student activists were rounded up on June 26 for a peaceful protest against the coup.

The arrests and the authorities' efforts to belittle their high-minded intention by trying to paint them as proxies of deposed politicians have fanned widespread anger and triggered more protests in their support.

The police needed approval from the military court to detain them for another week to prepare necessary legal papers to put them on trial.

Amid heightened political tension, the military court denied the request.

The decision to release them has effectively stopped the spread of political protests.

Meanwhile, the student activists do not only regain their freedom, they can also continue their political activism because the release order comes with no strings attached.

According to Kritsadang Nutacharas, the students' lawyer, his clients no longer need to report to the military court.

It is now up to the police to gather more evidence and bring the students before the military court when the papers are ready.

If the students are detained, however, the trial must begin within 48 days after the arrests. If convicted, they could face up to seven years in jail.

The young activists, however, still refuse to be tried in a military court because they are civilians.

The students of the NDM were charged with violating the military junta's order against political gatherings of more than five people. There were also concerns the students had been politically exploited by deposed politicians.

The decision to release the students shows the government wants to put an end to the saga quickly and stop further criticism from the international community against the military regime.  The government's critics said the military was wrong to arrest the students for exercising freedom of speech.

Any future activism by students is unlikely to be met with such harsh treatment from the military government. 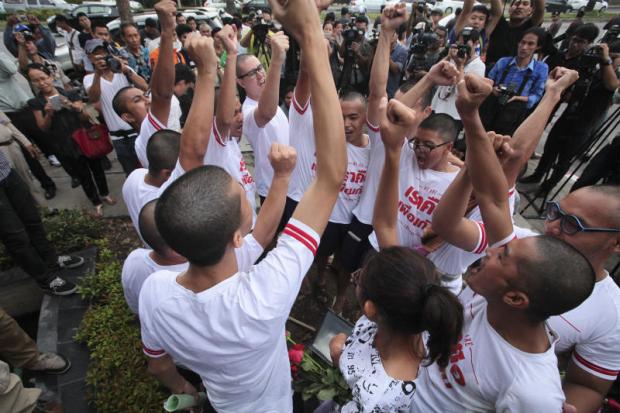 The 14 students activists hold their fists high in a gesture to signify the spirit of unity after their release. (Photo by Patipat Janthong)

The government has learned its lesson: Any efforts to severely punish students' peaceful political activities will eventually backfire.

The thinking now is that it is better to watch the students' movements from afar to try and work out if their motives are being exploited by a third party.

Military intelligence personnel are also monitoring anti-coup groups, especially in the Northeast, making it more difficult for them to be politically active.

Subsequently, political activists in the provinces and their leaders in Bangkok will now be careful with their movements.

With the students' release, the anti-government campaigns will lose momentum, at least for now.

Both Pheu Thai secretary-general Phumtham Wechayachai and red-shirt leader Nattawut Saikua said the military court made the right decision to release the student activists unconditionally, because it fosters an atmosphere of political openness and shows the military's commitment to defuse conflicts.

With the potential political showdown averted, the Prayut Chan-o-cha government can now concentrate on other battles such as the severe drought, human trafficking, illegal fishing, and the stagnant economy that are weighing the government down.