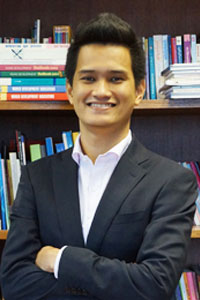 Specialised Financial Institutions (SFIs) were specifically founded by the state to enable the government's policy to develop and promote the economy and support numerous investments, under the supervision of the Ministry of Finance. During the past three to four years, many SFIs have shown satisfying results. The Government Savings Bank, the Bank for Agriculture and Agricultural Co-operatives and the Government Housing Bank retained accumulated earnings by the end of the second quarter of 2014 of 1.3 billion baht, 5.4 billion baht and 3.3 billion baht respectively. 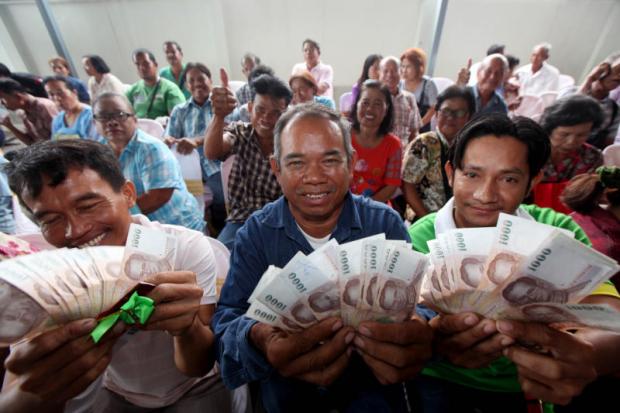 Rice farmers with money they obtained from the Bank for Agriculture and Agricultural Co-operatives, as part of a government financial assistance scheme. Specialised Financial Institutions (SFIs) were founded to develop the economy and support investments. Thiti Wannamontha

On the other hand, several institutions had fared poorly, especially the Islamic Bank of Thailand and the SME Bank, which suffered from a continuous accumulated deficit (by the end of 2014, the accumulated deficits were 12 billion baht and 9.4 billion baht respectively). The ratio of non-performing loans remained high at 33.4% and 39.6% respectively. Their financial status was also fragile with the BIS ratio at -1% and 7% respectively. The performance of these two SFIs directly affected the Ministry of Finance and the budget allocation for these SFIs.

During the past seven years, the government has had to spend 5.9 billion baht for the Islamic Bank of Thailand and 7.4 billion baht for the SME Bank to increase the capital for these two firms. The newly promulgated Fund Act for SFI System Development, also known as the SFI Fund Law, is an attempt to relieve this fiscal burden. The income of the fund is derived from money that the SFIs received from depositors with the annual rate not exceeding 1%, thus at a rate of 0.47% SFIs will have to deliver approximately 18 billion baht to the fund. Half of this amount will be provided by the Government Savings Bank.

Although the funds may relieve the fiscal burden of some SFIs, the SFI Fund Law itself may have several untoward effects.

First, collecting money from these SFIs increases their expenses, resulting in decreased profits. This then results in decreased earnings from the SFIs for the country. For instance, in 2013 the Government Savings Bank's total profit was 17 billion baht, of which 13 billion baht was generated for public revenue. If this amount was deducted for payments towards the SFI System Development Fund, public revenue would be reduced to 3.7 billion baht.

The second effect is that it will create non-budgeting expenses, showing a lack of fiscal discipline. For example, in 2014 the government arranged a 4.6 billion baht budget for SFIs. The approval of funds should follow the budgeting process under parliament's consent. However, this law allows the Ministry of Finance and the fund committees to freely increase the capital for SFIs with the approval of the cabinet, bypassing parliamentary permission. It should be noted that, in 2015, the income for the SFI System Development Fund will be approximately 18 billion baht (equivalent to the combined budget of the Ministry of Foreign Affairs and the Ministry of Science and Technology) and will eventually reach 50 million baht in 2024.

Lastly, the SFI Fund Law could aggravate the risk of moral hazards. According to this law, by mere permission of the cabinet, the Ministry of Finance has full liberty to increase the capital for SFIs without any prior approval from parliament. Such a provision could bring about wrong incentives for SFI executives, which will result in their businesses becoming too focused on making profit and taking greater risks than they should.

In conclusion, this law simply solves the end and not the root of the problem by taking profits from larger institutions, especially the Government Savings Bank, to increase other SFIs' capital without addressing the reasons behind the losses incurred by certain SFIs.

The root of the problems facing SFIs may lie in the actual administration of the SFIs themselves. So as to ensure the same standard between SFIs and private financial institutions, it is imperative the Bank of Thailand Act should be amended to allow the Bank to regulate the firms, validate the board of management, monitor results and rectify the problems of SFIs (the cabinet gave the Bank of Thailand that authority on Dec 2, 2014).

Therefore, the government should allocate a budget to compensate for any damages resulting from adhering to the government's policy itself.

Thus, the government must strictly establish the Public Service Accounts by separating SFIs' accounts into two accounts: a public service account and a business account.

In order to make the SFI fund's collection and allocation process transparent, the fund committees should report the financial budget and expenditures to the parliament and the public annually.

Itsakul Unahakate is a researcher at the Thailand Development Research Institute (TDRI). Policy analyses from the TDRI appear in the Bangkok Post on alternate Wednesdays.

Itsakul Unahakate is a researcher at the Thailand Development Research Institute (TDRI). Policy analyses from the TDRI appear in the Bangkok Post on alternate Wednesdays.