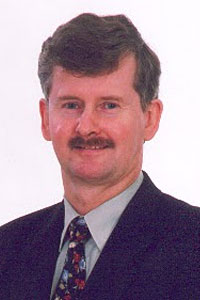 Wood is processed at a biomass thermal electricity generation plant in Ivankiv, in the Ukraine. The math shows that biomass for Krabi and Lampang is cheaper in the long run in many ways. (Reuters photo)

Though I work as a CFO in the electronics industry in Thailand, I also have investments in various energy stocks and farming. I have looked in detail at the economics of investing in a biomass energy project in Australia. From an investors' perspective, we examine the financial returns for a project, meanwhile countries need to evaluate the whole picture — economic costs and benefits, both now and in the future.

The Electricity Generating Authority of Thailand (Egat) plans to build new coal-fired power plants in Krabi and Lampang provinces. Egat's argument is that coal is cheaper and the country needs to reduce the dependence on natural gas as the primary fuel for electricity production. However, for both Lampang and Krabi power plants, when all of the costs and benefits are considered, biomass power plants are a better option for Thailand.

To calculate the full economic returns of a power plant, we need to consider the fuel cost (to the Thai economy), power plant construction cost, plant electrical output efficiency, plant operating costs, infrastructure costs - such as the cost of building a port to import the coal - the cost of electricity transmission towers and wires, reliability of the electricity supply, the net benefits to the local, regional and country economy over the foreseeable future and the cost of eliminating pollution, including greenhouse gases such as carbon dioxide.

Risks also have to be considered, such as future fuel price volatility, consistency of electricity supply, cost of finance, impact on tourism and other businesses and political factors, such as the feelings of people affected by the power plants.

To produce electricity from solar or wind there needs to be a significant amount of baseload electricity capacity available to supply electricity when the sun doesn't shine or wind doesn't blow. That power can be provided from baseload power plants such as fossil fuels, hydropower, biomass or municipal solid waste power plants.

The southern and northern regions of Thailand have significant potential for biomass fuel supply. Biomass power plants can be run as baseload plants, supplying electricity continuously to the grid.

For economic efficiency, biomass power plants of 30 MWe would be an appropriate plant size. Thirty 30 MWe plants spread around southern Thailand would be produce the same electricity as one 875 MWe coal plant. Wood chips could be used as the fuel, however by using flexible biomass technology different fuels can be used such as Giant Napier Grass, agricultural waste such as straw, palm oil bunch waste, coconut husk and rubber wood offcuts.

Therefore, the total cost for thirty 30 MWe plants is 45 billion baht, which is about 10% less than the proposed 50-million-baht coal-fired plants. It sounds odd as normally one would expect a coal fired plant to be cheaper than thirty biomass plants but the cost of the coal plant is higher than normal due to the infrastructure needed and also the technology used for a so called "clean" coal power plant.

A biomass fuel such as air dry wood has about 60% of the energy content of thermal coal per tonne, wood chips, and 1,000-1,200 baht per tonne are less than half the cost per tonne of coal, estimated at 2,700 baht per tonne, delivered to the power plant. Biomass power plants are about 75-85% of the electrical efficiency of coal fired plants.

When the main plant operating cost include construction, fuel costs and electrical efficiency, thirty 30MWe power plants would produce electricity within 10% of the cost of the of the proposed coal-fired plants. There is also no need to build 30 plants at once. They can be built over time to match the growth in demand for electricity in the southern Thailand.

There are also significant benefits from using locally sourced biomass as fuel. For the 11 billion baht per year for the total annual wood fuel cost for the biomass power plants, an additional boost to the region and Thailand's GDP would be provided because farmers and truckers would spend that 11 billion baht annual income. Using a GDP multiplier of four times, the further boost Thailand's GDP would be an additional 44 billion baht per year increased spending in the Thai economy.

Electricity supply would be as, or more, reliable from 30 biomass power plants around southern Thailand than one coal fired plant. Distribution costs of the grid would also be lower as the production load is closer to the consumers.

Farmers would further benefit from a more stable income source as the price of the wood would be set in long term contracts and not fluctuate like rubber or palm oil prices do. Rubber prices may increase as some existing farm land used to produce rubber is used to grow trees for wood fuel.

Thailand would further benefit from increased local engineering expertise in the development and maintenance of the thirty 30 MWe biomass power plants. This type of expertise development is exactly what Thailand needs to break out of the middle income trap.

The 30 biomass power plants can supply electricity reliably, they would provide substantial additional economic benefits to Thailand and the southern economy in particular. Together with the reduction in imports and the easing of green house gases, it is quite clear that building biomass fuelled power plants rather than the proposed coal fired plants is a better option for Thailand. This is truly what "sustainable economy" is about. 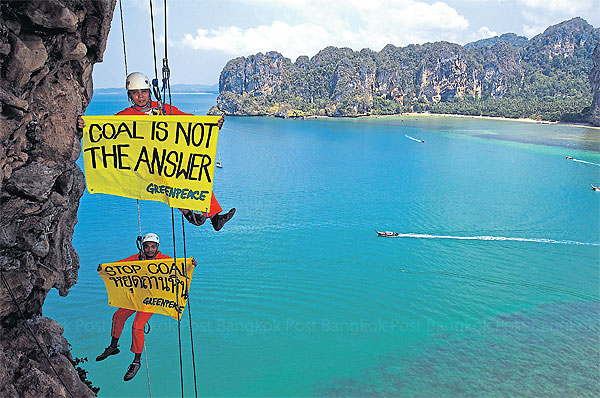 Activists displaying banners against coal plants hang from a cliff at Railay Beach in Krabi. The government plans to build several coal plants across the country, one of them in Krabi province, in projects opposed by local communities. Athit Perawongmetha/ Grenpeace