Some remarkable goals have been achieved since the world body's inception, but more needs to be done to keep up with changing times.

The United Nations will mark its 70th anniversary when world leaders assemble next month at its headquarters in New York. Though there will be plenty of fanfare, it will inadequately reflect the UN’s value, not only as the most important political innovation of the 20th century, but also as the best bargain on the planet.

But if the UN is to continue to fulfil its unique and vital global role in the 21st century, it must be upgraded in three key ways.

Fortunately, there is plenty to motivate world leaders to do what it takes. Indeed, the UN has had two major recent triumphs, with two more on the way before the end of this year.

An Iranian diplomat, in explaining why his country will scrupulously honour the agreement, made the point vividly: “Do you really think that Iran would dare to cheat on the very five UN Security Council permanent members that can seal our country’s fate?”

The second big triumph is the successful conclusion, after 15 years, of the Millennium Development Goals, which have underpinned the largest, longest and most effective global poverty-reduction effort ever undertaken. Two UN secretaries-general have overseen the MDGs: Kofi Annan, who introduced them in 2000, and Ban Ki-moon, who, since succeeding Mr Annan at the start of 2007, has led vigorously and effectively to achieve them.

The MDGs have engendered impressive progress in poverty reduction, public health, school enrolment, gender equality in education and other areas. Since 1990 (the reference date for the targets), the global rate of extreme poverty has been reduced by well over half — more than fulfilling the agenda’s number one goal. 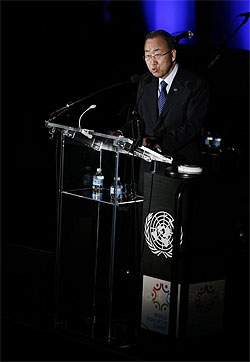 Inspired by the MDGs’ success, the UN’s member countries are set to adopt the Sustainable Development Goals (SDGs) — which will aim to end extreme poverty in all its forms everywhere, narrow inequalities and ensure environmental sustainability by 2030 — next month. This, the UN’s third triumph of 2015, could help to bring about the fourth: a global agreement on climate control, under the auspices of the UN Framework Convention on Climate Change, in Paris in December.

The precise value of the peace, poverty reduction and environmental cooperation made possible by the UN is incalculable. If we were to put it in monetary terms, however, we might estimate their value at trillions of dollars per year — at least a few per cent of the world economy’s annual GDP of US$100 trillion (three quadrillion baht).

Yet spending on all UN bodies and activities — from the Secretariat and the Security Council to peacekeeping operations, emergency responses to epidemics and humanitarian operations for natural disasters, famines and refugees — totalled roughly $45 billion in 2013, roughly $6 per person on the planet. That is not only a bargain; it is a significant under-investment. Given the rapidly growing need for global cooperation, the UN simply cannot get by on its current budget.

Once the world is on a robust path to achieve the SDGs, the need for, say, peacekeeping and emergency-relief operations should decline as conflicts diminish in number and scale and natural disasters are better prevented or anticipated.

This brings us to the second major area of reform: ensuring that the UN is fit for the new age of sustainable development. Specifically, the UN needs to strengthen its expertise in areas such as ocean health, renewable energy systems, urban design, disease control, technological innovation, public-private partnerships and peaceful cultural cooperation. Some UN programmes should be merged or closed, while other new SDG-related UN programmes should be created.

The third major reform imperative is the UN’s governance, starting with the Security Council, the composition of which no longer reflects global geopolitical realities. Indeed, the Western Europe and Other Group (WEOG) now accounts for three of the five permanent members (France, the United Kingdom and the US). That leaves only one permanent position for the Eastern European Group (Russia), one for the Asia-Pacific Group (China) and none for Africa or Latin America.

The Asia-Pacific region accounts for roughly 55% of the world’s population and 44% of its annual income, but has only 20% (three out of 15) of the seats on the Security Council.

Asia’s inadequate representation poses a serious threat to the UN’s legitimacy, which will only increase as the world’s most dynamic and populous region assumes an increasingly important global role. One possible way to resolve the problem would be to add at least four Asian seats: one permanent seat for India, one shared by Japan and South Korea (perhaps in a two-year, one-year rotation), one for the Asean countries (representing the group as a single constituency) and a fourth rotating among the other Asian countries.

As the UN enters its eighth decade, it continues to inspire humanity. The Universal Declaration of Human Rights remains the world’s moral charter, and the SDGs promise to provide new guideposts for global development cooperation.

Yet the UN’s ability to continue to fulfil its potential in a new century requires its member states to commit to support the organisation with the resources, political backing and reforms that this new era demands. © 2015 Project Syndicate

Jeffrey D Sachs, Professor of Sustainable Development, Professor of Health Policy and Management, and Director of the Earth Institute at Columbia University, is also Special Adviser to the United Nations Secretary-General on the Millennium Development Goals.