If you were asked to describe public transportation in Thailand, what would come to mind?

Those who have used local public transportation must have suffered at least one, if not all of the above. Is it because officials involved have never had first-hand experience while the public has never had a say?

In the capital, the Bangkok Metropolitan Administration (BMA) has encouraged people to use public transportation and more bicycles as a way to tackle the notorious traffic.

But the BMA seems to have lost direction in promoting cycling as it limits it to leisure rides and designs city bike lanes accordingly.

In any case, Bangkok has more choices for commuters. We have a more efficient rail system. But the fares make the system inaccessible to low-income people. Besides, a BTS plan to ban all non-foldable bicycles from its carriages would only discourage urban cyclists.

But Bangkokians are luckier than their fellow countrymen. Take Khon Kaen for example.

Last Tuesday, several dozen local commuters protested against the relocation of two old bus terminals at Klang Muang Road and Ratchadanusorn Road by Khon Kaen Land Transportation Authority Office to a new site which is some 6.5km out of town. They complained it inconveniences local commuters.

The office argued that the new site, which was opened early last year, is better for inter-city travellers who don't need to come into town. Besides, they said nine songthaews and one public van have been rerouted to transport commuters to and from the new terminal. But those familiar with living upcountry will know it can take up to 30 minutes to travel that distance while it is hard to find local public transport.

And the relocation calls into question the transparency of the process. The office issued a relocation announcement on Aug 21, which became effective the following day. Officials claimed they tried to make an announcement earlier but were faced with opposition from vendors and commuters at the old terminals which remained partly in use until late last month.

There were reports of disagreements between the office and Khon Kaen University which conducted the public survey on the site relocation. The survey, which was carried out in May-June last year --  after the new site was opened, instead of before -- shows the couldn't-care-less attitude of the transport office with regard to public participation. 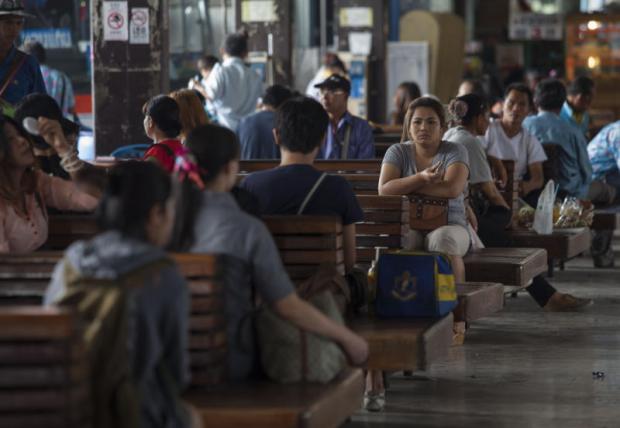 Commuters wait at an old bus terminal in Khon Kaen. A new terminal has been opened, some 6.5km out of town, inconveniencing travellers. Pattarapong Chatpattarasill

A source on the survey team said the majority of the over 10,000 respondents -- all inter-city travellers -- disagreed with the relocation, citing inconvenience and the higher cost of getting into town. However, a transport official challenged the allegation that the majority disagreed. He tried to counter the survey by giving a different number -- that only 9,000 people were questioned. He also refused to provide the survey results or give a telephone interview.

More importantly, the survey only targeted inter-city travellers while it is people in Khon Kaen who are affected most by the relocation. Countless students and working people from nearby towns who have to use these buses every day have to spend more time and money on getting to the town centre. The old terminals were close to the train station, markets, local shops, banks and quite a few government offices -- many within walking distance.

Speculation ran wild that the two terminals which belong to the state are being studied for commercial development given their prime location. One investor is said to have already been eyeing the old terminal next to the public park with plans to turn it into a department store.

In most developed countries, stations -- for trains, buses, boats or planes -- are most easily accessed by local public transport. A station being moved to pave the way for the construction of a department store would only happen very, very rarely. But not in Thailand, and it's certain that Khon Kaen is not the only case in the country.

Back in Bangkok, at least there's been one positive development for commuters. The Bangkok Mass Transit Authority is launching a new express bus service connecting Udomsuk BTS station and Suvarnabhumi airport, starting today.

But the new service, with six stops along the BTS route, will only be really useful when the skytrain operator starts to understand the nature of travellers who mostly carry large bags. People must be allowed to have access to elevators which are now largely limited only to those in wheel-chairs and the visually or physically impaired. With this new service, the BTS will have to change its policy and accommodate people in need -- in this case, people with large bags and suitcases.

Moreover, City Hall which has promoted the use of bicycles as an option for city folk, must negotiate with the skytrain operator to prevent the ban on non-foldable bicycles -- at least during off-peak hours or weekends when crowds are not an issue.

In Khon Kaen, a new opinion poll should be conducted and, as it's no longer possible to make a U-turn and go back to having the old terminals, the new survey must address users' needs. At the very least, public transport to the new terminal should be adequate.

Last but not least, the office must make sure that the old terminals are used for the public's benefit  and are not turned into department stores.