Should regime not have deported Uighurs?
Opinion

Should regime not have deported Uighurs?

While Defence Minister Prawit Wongsuwon and his deputy Udomdej Sitabutr are attending China's first-ever military parade to commemorate Japan's World War II surrender in Beijing today, investigators in Bangkok are busily gleaning information from two detained foreign suspects to probe their hypothesis that the deadly Erawan shrine blast was in retaliation for the deportation of over 100 Muslim Uighurs to China in July.

Though Gen Prawit, also the deputy prime minister for national security, declined to confirm before leaving for the Chinese capital whether the second male suspect was a Uighur, deputy national police chief Chakthip Chaijinda yesterday said the image of the passport that went viral on the internet on Tuesday belonged to a man who was identified on the document as Yusufu Mieraili, a 25-year-old Chinese national from the Xinjiang region, which is home to the Uighurs.

The presence of two of the top Thai generals at the parade shows the strong bilateral friendship between Bangkok and Beijing. The two Thai military leaders were among 30 heads of state and government leaders invited to attend, including Russian President Vladimir Putin and South Korean President Park Geun-hye.

These healthy ties might have been strengthened after the ruling junta bowed to Beijing's demands and handed 109 Uighurs over to the Chinese authorities who claimed that some of them were suspected terrorists. However, the move led to an outpouring of international condemnation led by the United Nations. The deportation was made even more inhumane as the men were separated from their wives and children who had earlier been sent to Turkey.

It was a decision with disastrous consequences the ruling generals and the hawkish civilians in the National Security Council did not foresee, despite opposition from more cautious officials at the Ministry of Foreign Affairs and the national police force.

Hours after the deportation news broke and rumours reached Turkey that some of the men were killed at the airport, an angry Turkish mob attacked the Thai honorary consulate in Istanbul. Protesters armed with sticks, planks and stones smashed windows and broke into the consulate, flinging files and documents on the floor and outside the building.

Less than two months later, a deadly blast hit downtown Bangkok where Chinese and Asian tourists of Chinese descent come to pray. In the carnage, 20 lives were lost and some 130 tourists and locals injured.

Just a couple of hours after the explosion, national police chief Somyot Poompanmoung and government spokesman Sansern Kaewkamnerd said the blast was politically motivated, just like previous bombs in Bangkok and elsewhere.

Even until Wednesday when the police investigation was focusing on a Uighur trafficking network, Gen Prawit, the national security czar, continued to downplay the police hypothesis, saying it was still not clear whether the attack was carried out by Uighurs. 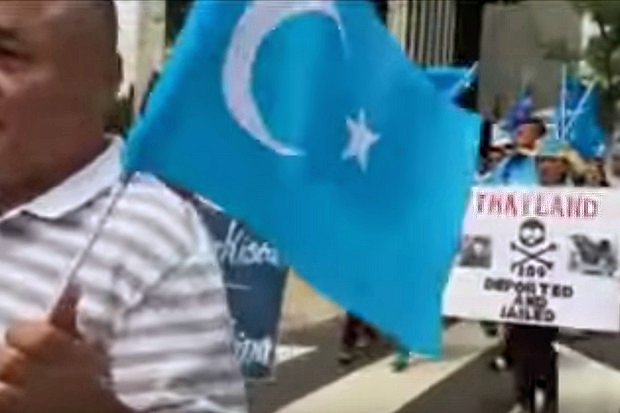 Protests like this one in Washington in July have inflamed opinion against Thailand, a development some say has led indirectly to the terrorist attack. (Screen grab from YouTube video)

Uighurs or not, Gen Prawit has taken two national security council chiefs -- the outgoing and incoming -- with him on this Beijing trip due to end on Saturday. They are scheduled to meet with Chinese Premier Li Keqiang and other military leaders to discuss economic and security cooperation. Though General Prawit didn't say he would brief the Chinese about the blast, the topic will almost certainly be raised.

In retrospect, should Thailand not have expelled the Uighurs to China? Or to be more precise, should the ruling junta, which is not fully recognised by the democratic world, have been less responsive to Chinese demands?

National interest always comes first in a country's diplomacy. But being so accommodating to a superpower's demands, making Thailand the target of an international outcry and what is looking increasingly like an international terror attack, does not bode well for the country in the long term.

The ransacking of the Thai consulate in Istanbul failed to alert the Thai security services that the anger was real and long-lasting, and could possibly turn into a calamity. It also highlighted the lax surveillance by the police of organised criminal gangs though they deserve a pat on the back for their investigation results.

So, instead of burying our heads in the sand and telling half-truths about the motives behind the blast, the military government must be honest about the investigation results. If the blast was perpetrated by a network of local and international terrorists, then say so.

By admitting the facts and the mistakes made, the government should consider this as a lesson learned and execute more pro-active measures to pre-empt further attacks. Effective policing and surveillance systems must be put in place. Collaboration among regional intelligence services should also be strengthened to boost safety.

It is not too late to start doing this today.