Language can be about power as much as communication. It can tear societies apart or bring them together, depending on its design and application.

In the deadly Malay-Muslim insurgency in Thailand's southernmost border provinces, for example, the use of the local Malay dialect, or yawi, as an official second language can help heal and lay a path towards settlement and lasting peace. Similarly, in the broader Bangkok-based national polarisation over the past decade, semantics can also play an instrumental role in bridging the divide.

Prime Minister Prayut Chan-o-cha recently came up with a few key words to rectify and replace what he sees as the lexicon of a troubled past. Specifically, the words prachaniyom, or populism, and raak ya, or grassroots, have been marginalised in favour of Pracharath, or people's state, and than raak, or "base roots". These two semantic distinctions may appear insignificant at first glance but in fact they hold the key to what has gone wrong in Thailand and how it might be put right.

At issue will be the intentions and efforts of the PM and his team. If they do more than merely tweak a key word here and there and proceed to implement a policy setting that Thailand needs to reduce its disparity and promote unity, then the word changes will have profound ramifications.

In their Thai meanings, populism and grassroots are entwined and associated with the political machinery of deposed former prime minister Thaksin Shinawatra. When he formed what became the juggernaut Thai Rak Thai Party in 1998, Thaksin stumbled upon a winning formula well beyond any Thai politician's wildest dream.

After systematic countrywide polling, it was found that the most of the Thai electorate lived upcountry, especially in the North and Northeast, and that their aspirations and grievances could be encapsulated in a policy platform featuring an affordable 30-baht healthcare scheme, access to micro-credit plans at the village level, and debt relief to enable the rural sector to get back on its feet. In addition, there was the One Tambon, One Product (Otop) policy of bringing rural products to wider markets in urban areas and even abroad.

This policy platform based on capturing the "grassroots" through "populist" policies -- debt suspension, 30-baht healthcare and Village Fund, along with Otop -- became phenomenally successful because no other Thai political party in the past had bothered to approach and cater to the vast majority of Thai voters in this way. Thaksin's Thai Rak Thai Party won handily in the January 2001 polls and was returned in a landslide re-election in February 2005. His invincible electoral mandate was soon accompanied by hubris and abuse, corruption and conflicts of interest.

To be sure, Thaksin's populist success was really a one-hit wonder. Subsequent populist schemes, particularly the rice-pledging, first-car, and first-home subsidies and rebates under his sister Yingluck Shinawatra and the Pheu Thai Party, were fiscally and conceptually unsustainable and unsound, designed expediently for the July 2011 due to a lack of time and a lack of ingenuity and innovation that bred the first-generation populism from 12 years earlier. 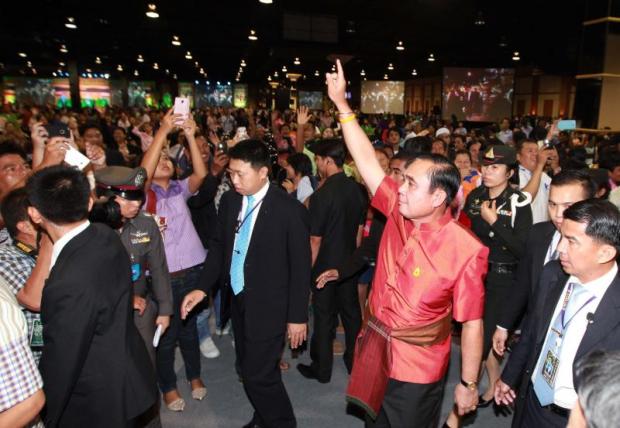 The eventual outcome of runaway populism based on capturing the grassroots, as we know too well, was a colour-driven protest movements for and against Thaksin's type of rule, punctuated by two coups in 2006 and 2014.

Now there is an opportunity to unite hearts and minds and bridge the Thai divide by doing some of the things Thaksin did without him and his ilk, by adopting policies that provide answers to the vast majority of the Thai people. The focus can shift from populism and grassroots to "people's state" and "base roots".

It matters little what Gen Prayut calls them. His government can demonise and even informally ban the words "populism" and "grassroots" but the results must go in a similar direction. The Thai people, each and everyone from town and farm, up and down the country, must be given a fair shake. There must be a broad redistribution of income to reduce the disparity that gave rise to the likes of Thaksin in the first place.

It is unclear whether the PM gets this. His recent call for the recalibration of the relationship between the state, society (i.e. "people") and business is promising. The state belongs to society, and society must ultimately choose the state representatives under which it is governed.

The PM and his government are right to stand up against money and political muscle that can capture the Thai state. But they have to come up with ways that return the state to Thai society. Thai business, which was initially favourable towards Thaksin and later turned against him, is likely to go with the preferences of whatever constitutes the Thai state. So the key relationship and balance is between Thailand's state and society.

Another word that jars the ruling generals and their supporters is "democracy" because it conjures up images of elections that can be won and abused by demagoguery and populist policies through grassroots manipulation. It is acceptable to refer to it as popular rule, a government chosen by a majority of the people it governs with regularity and sufficient integrity. The Prayut government does not have such majority support. We have no way of knowing what kind of people's support it does have because the Thai people are not able to express their views and opinions in an organised fashion.

In its interim timetable, the military government would thus do best by following through on its pledge of paying attention to the lower rungs of society and business, such as low-income earners and small- and medium-enterprises.  Since it does not have to be concerned with winning votes at the polls, the Prayut government has a greater responsibility to back up its intention with genuine effort that turns the new wordings into pro-people policies without the undesirable aftertaste of grassroots populism.