The recent discovery of two guardian deity sculptures at the Bangkok City Pillar Shrine is of significance for Thailand, and due credit must be given to the War Veterans Organisation and the Fine Arts Department. I have a penchant for historical and cultural artefacts that tell us more about who we are and where we came from as a nation. We are blessed with such an abundantly beautiful and rich cultural heritage, something which we unfortunately take for granted.

However, I'm just slightly concerned that the government has decided to seize this opportunity to send the wrong message. These two guardian deities have now been lauded by Prime Minister Prayut Chan-o-cha as objects which will ward off bad luck and misfortune. I hope this is not meant literally, because the reason we are in such a terrible state today is not due to bad luck. It's all due to poor management, planning, policies and, above all, leadership. Luck has absolutely nothing to do with it.

People often tell me that I'm far too harsh towards the military regime. I guess that's a fair point. I don't claim to have the solutions to everything. All I have is my honest "unadjusted" opinions. So let me try and strike a more conciliatory tone here and explore some common ground I share with Prime Minister Prayut.

We are a country that is in desperate need of reform. We're like a Thai teak house that has been neglected and abused. Once standing tall and beautiful, but now a mere ramshackle. The roof leaks, the windows are shattered, the floors are creaking and the very pillars that are holding the house together have been hollowed out by wood lice. Meanwhile, the occupants are squabbling over who owns this crumbling house and who should be the party responsible for its restoration. In my opinion, we need reform before, during and after elections, because the task we face is monumental. If there is ever a time when strong government is required and an assured steady hand is needed at the helm, it is now. On these points, I think the prime minister and I are on the same page.

However, it is quite obvious to me and, I think, many international observers that the wrong kind of leadership is being provided. I see weakness not strength, insecurity not confidence and fear not courage. The prime minister's style of leadership derives from decades in the barracks where his authority was never challenged and everything he said or did was celebrated by a chorus of adulation. He's never had to persuade people to his views or convince people of the merits of his arguments. He's used to shouting out orders and having them obeyed. Well, as prime minister, he's having to learn a more subtle and nuanced approach. 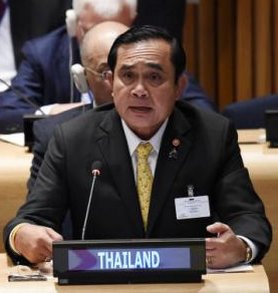 However, to the prime minister's credit, he seems to have adopted a more subdued and subtle approach at the United Nations General Assembly, especially when it comes to the press. But unfortunately I was rather disappointed with his speech on sustainable development. The speech was muddled and rushed, as if he had entered himself into some speed reading contest. The translator must have had a tough time because judging from the faces of the audience nobody understood what was said. The Ministry of Foreign Affairs should have adequately prepared the prime minister. What was the rush? Were there more pressing matters to attend to elsewhere than addressing the United Nations?

But what would be the right message? In my view, the prime minister should just forget about the "returning happiness" to the people concept. The international press thinks it's comical and it is quite often used as a punchline for jokes about Thailand. The right message would be a succinct explanation, based on logic and reason, backed by empirical evidence, on the issues we face and how the government plans to address them, together with a sincere roadmap for returning democracy to Thailand.

Lastly, I would like to show my appreciation to the prime minister for his efforts in New York. So for what it's worth, "Thank you three times".