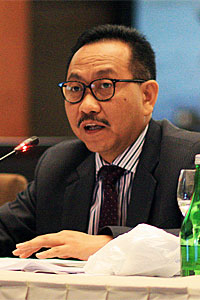 By 2050 there will be about one billion extra mouths to feed in Asia, as its population soars. We might be able to produce enough food. But how much will be safe to eat?

On World Food Day today, it is a good time to take stock of this challenge. There has been some action, with organisations such as Asean and the South Asian Association for Regional Cooperation working on areas such as harmonising food control and safety, and good agricultural practice. However, the region still lacks clear and enforceable standards for food quality. National food safety policies are often weakly enforced, and need updating to international standards.

The upshot is a rising number of people sickened and killed by bad food, and correspondingly high public health bills. Data on Asia's food quality is scarce, as this is an emerging problem. However, bacteria, viruses, parasites and chemicals in food can cause over 200 diseases, including cancer.

The World Health Organisation says that as many as 700,000 children die of diarrhoea each year in its Southeast Asia region, many of them after eating unsafe food. Disturbingly, 40% of all people sickened by food-borne illnesses are children.

Why is so much of our food unsafe to eat? Pressure to grow enough food for urban consumers is one factor. To meet demand, Asia's low-tech, labour-intensive farms are using more chemical fertilisers and pesticides, contaminating soil and waterways with toxins such as lead and arsenic, which find their way into food. In South Asia -- which has the region's largest number of malnourished children -- around 43% of agricultural land is degraded, much of it due to inappropriate farming and processing practices such as the unregulated use of chemicals, hormones and preservatives.

Another issue is the journey from farm to table. Farmers often live a long way -- perhaps even in different countries -- from city consumers. Humid weather compounds the problem. Poor storage, handling and transport logistics -- many countries lack adequate cold-storage and transport facilities -- cause half of the vegetables produced in developing Asia to spoil before they even reach the market.

Some of this rotten food makes it to market, where it can be bought and eaten. The unspoiled food may have had its shelf life extended by preservatives such as formaldehyde, also used as a medical disinfectant or an embalming agent. Climate change compounds the risks, as fluctuating temperatures make it harder to maintain quality along the production chain. Asia also now appears to be in the grip of El Niño, which threaten agriculture through drought.

Fixing Asia's food safety problem won't be easy. The good news is that measures to deliver enough food for Asia's millions would also lift the quality of their food.

To tackle food safety at source, greater efforts are needed to reduce environmental degradation, particularly of waterways and agricultural land. Asia's smallholder farms -- 87% of the world's 500 million smallholdings -- desperately need modernising. Part of this is introducing enforceable regulations on the use of chemicals in pesticides and fertiliser. Farmers also need more support for climate adaptation measures including drought-resistant and salt-tolerant seed varieties.

Post-harvest, vast investments are needed to improve the storage and transport of food at each stage of the production chain. Investment by both public and private sectors in infrastructure such as storage and cold chains will lift safety standards, while helping millions of smallholders find dependable markets for their produce.

This could spur the creation of well-organised wholesale markets -- like Frischezentrum Frankfurt, Rungis in Paris and Mercasa in Madrid -- which provide safe and nutritious food for consumers through seamless linkages with millions of producers and suppliers.

But more work is needed to harmonise food standards regionally, given the expanding cross-border trade in food. Governments should partner with private firms on certification systems for farms and retailers that provide safe food.

Private testing facilities could play a role, as happens in developed markets like Australia, Europe and the United States where firms help the food industry achieve compliance with a range of safety standards. This typically does not happen in developing Asia where the priority is too often crop quantity rather than quality.

Consumers will pay a premium for safe food, so in the long term everyone benefits. To achieve this win-win, we need to take action now.