A floundering economy and initial missteps have bogged down Indonesian President Joko Widodo's first year in office, denting confidence in the man once hailed as the country's new hope.

Joko "Jokowi" Widodo was sworn in as Indonesia's president on Oct 20, 2014, amid high expectations for reform and change, but moves during his first months in office left investors disappointed, with the cabinet filled with political appointees.

He came to power when the Indonesian economy was experiencing a slowdown because of sluggish external demand for commodities. 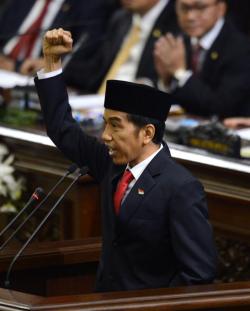 President Joko Widodo delivers an address in the House of Representative in Jakarta on Oct 20, 2014. AFP

In contrast, his predecessor Susilo Bambang Yudhoyono oversaw an economy boosted by a commodity boom, driven by China's strong growth.

"Jokowi needed to act faster and be creative," said Ari Kuncoro, an economics professor at the University of Indonesia, using Mr Widodo's nickname.

"But the people he picked for his cabinet didn't seem to have what it takes to do that," he said.

"He needs people who have a grasp of the complex dynamics of the global economy."

Mr Widodo seemed to have listened to his critics.

In August he reshuffled the cabinet, bringing in a former Wall Street investment banker as trade minister and other figures seen as capable.

A second cabinet reshuffle is expected before the end of the year.

Since last month, he has announced four packages of measures, including changing dozens of rules that are in the way of efforts to speed up infrastructure development, attract investors and protect jobs.

During his first foreign trips as president, Mr Widodo declared that Indonesia was open for business, but at the same time his ministers imposed protectionist and business-unfriendly policies.

These include reducing imports of beef, causing prices to spike, and banning the sale of all alcoholic drinks at convenience stores across the country, ostensibly to curb drinking among youths.

His government's decision to execute 14 drug convicts, including 12 foreigners, earlier this year drew international criticism and sparked diplomatic rows with Australia, France and Brazil, whose citizens were among those put to death.

"For the first three months the only story coming out of Indonesia was [the execution of] foreigners on death row and the failure of the justice system," said Paul Rowland, a long-time Indonesian election monitor and advisor to political risk publication Reformasi.

"We have a president saying we're open for business on one hand and on the other hand line ministries were apparently going in the entire opposite direction," he said.

The economy grew 4.7% in the second quarter, the slowest pace in six years.

Mr Widodo, a former furniture exporter, is the first Indonesian president who did not come from a prominent political family or the military elite.

He was the mayor of the mid-size town of Solo and later the governor of the capital Jakarta before being nominated by his Indonesian Democratic Party of Struggle (PDI-P) to run for the presidency last year.

His appeal to voters has been his folksy style and a squeaky clean reputation as well as some successes in running Solo.

A survey by private pollster Indo Barometer suggested that his popularity had dropped 11.5 percentage points from 57.5% six months ago.

Respondents cited rising prices, the economic slowdown and the decline of the rupiah against the dollar as major failures on the part of the president.

About 66% of respondents said their lives were worse off and 50% agreed that the government had a poor record of fighting corruption.

"Our promises are for five years," he told Metro TV late yesterday. "We can't fulfil all of them in just one year."

Mr Rowland said he believed Mr Widodo was "a genuine reformer" despite some initial missteps.

"Stepping into the national stage is always going to be difficult," Mr Rowland said. 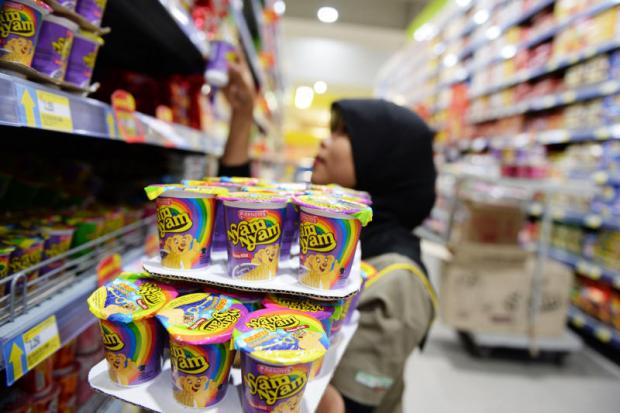 An employee works at a supermarket in Karawaci, Banten. Indonesia's sluggish economy has dimmed the first anniversary in office of Indonesian President Joko Widodo. Bloomberg

ฺฺBangkok Governor Chadchart Sittipunt thanked low-ranking staff on Sunday for their good work that helped City Hall connect with residents in the capital.

A Hong Kong lawmaker who posed for a group photo with Chinese President Xi Jinping during the leader's visit to the financial hub this week confirmed Sunday he has since tested positive for coronavirus.

SURAT THANI: Ko Phangan, an island district of this southern province, has been ranked the No 1 destination for people seeking a workation (work + vacation) in a recent survey by William Russell, a website which offers health insurance, life insurance, and income protection plans for people living and working abroad.