The cabinet on Tuesday approved a budget of 9.8 billion baht to be disbursed from the Central Fund for the Ministry of Natural Resources and Environment to pay the NVPSKG consortium for the construction of the Klong Dan waste water treatment project in Samut Prakan province as ordered by the Administrative Court.

Indeed. Not only should taxpayers not be made to bear the burden of a project so riddled with corruption like the Klong Dan waste water treatment plant, but those involved in the corruption from government officials to politicians and company executives must be made to pay.

Regrettably though, the "big fish" in this shameful corruption scandal, former deputy interior minister Vatana Asavahame, remains free and lives a good life overseas after he was sentenced to 10 years' imprisonment by the Supreme Court's Criminal Division for Political Office-Holders. 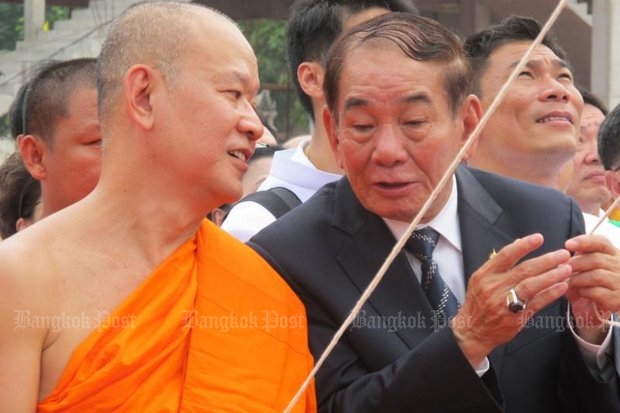 Vatana Asavahame, career politician and convicted of corruption in the Klong Dan construction, is enjoying life abroad, where he has shown up to donate to Chinese temples, as at this 2012 event. (File photo by Nauvarat Suksamran)

From the beginning, the project was designed to have two separate treatment facilities -- one on the western side of the Chao Phraya River in Tambon Bang Plakod of Phra Samut Chedi district and the other on the eastern side of the river in Bangpu Mai district. For questionable reasons, the design was completely changed to have just one treatment facility at Klong Dan which is 20 kilometres away. The pipeline system for the flow of industrial discharge was designed to go underground instead of on the surface.

The estimated cost of the pipeline system was 14 billion baht while the treatment plant was projected to cost about three billion baht.

Because of the change in the design and the relocation of the site of the treatment facility, the total cost of the project ballooned from the original 13.6 billion baht in 1985 to 23.7 billion baht three years afterward. Yet the cabinet gave the modified project its blessing, strangely without voicing any suspicions.

The Pollution Control Department bought the 1,900 rai of land at an inflated price of about one million baht per rai despite the median price of 480,000 baht set by the Samut Prakan land department. Much worse, it did not even bother to check that some of the land is flooded by seawater most of the time.

No environmental impacts assessment study was conducted and no public hearing was held to allow the residents of Klong Dan, who are mostly fisherfolk, to air their opinions about the project. Hence, the stiff resistance against the project by the residents.

Equally disappointing was the Asian Development Bank's failure to monitor and oversee the project it financed, resulting in huge corruption.

Complaining about the wasteful spending in the project is not enough. The statute of limitations should be lifted in corruption cases so that all cheaters -- be they politicians, bureaucrats, or the companies involved in the corruption scheme -- must be made to pay for their crimes.