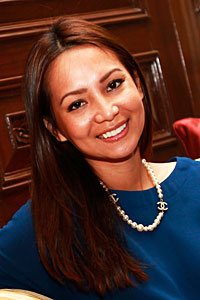 The recent removal of vice-president of the Cambodian National Assembly Kem Sokha and the unjustified arrest warrant for opposition leader Sam Rainsy demonstrates a pattern of lawlessness under the reign of the Cambodian People's Party (CPP) and strongman Hun Sen.

In fact lawlessness -- in particular the executive power's interference in the judicial branch -- is not unusual for Cambodian politics. By stripping Kem Sokha, who is also deputy leader of the opposition party, of the vice-presidency on Oct 30 for "being verbally critical against the government", the CPP lawmakers are acting in a manner characteristic of rubber-stamp legislative assemblies in Third World dictatorships.

On top of that, it is a breach of the Cambodian constitution. The constitution, which was put in place in 1993 following the Paris peace agreement, borrowed salient legal concepts from the French and German systems that intend to ensure diffusion of power among different constitutional bodies, and thus provided for a system of checks and balances.

The vice-presidents play an instrumental role in the process of appointment of the royal government, as without their consent, the president cannot proceed to make this proposal to the King.

The two vice-presidents are also members of the Permanent Committee of the National Assembly, and are empowered to serve as acting president in the absence of the president.

They serve on the Crown Council, a constitutional body that is responsible for the election of the King. Even more significant is their role in the constitutional line of succession -- the first vice-president is fourth in line to assume the role of the acting head of state, and by the virtue of this position, he is eligible to serve as the supreme commander of the Royal Cambodian Armed Forces.

Let's take a quick look at the French and German constitutions.

The French version provides for the election of the president of the National Assembly for the entire legislative term, while under German Basic Law, the president and vice-presidents of the Bundestag are elected at the inaugural convention of the assembly, and cannot be removed.

Similarly, the Cambodian constitution does not set out a process for the removal of the president and the vice-presidents except in the case of resignation or death.

This is meant by design and any theory that purports to sustain the ouster of these constitutional authorities is neither justifiable through the textual method of interpretation nor do such actions support the drafting committee's aim of inducing "parliamentary stability".

The dismissal of any of these officials will kindle a constitutional crisis given the high significance of the roles they are tasked with discharging within the constitutional framework.

In removing Kem Sokha, the CPP has also established a precedent that would serve to dilute the constitutional authority of the presidents of the National Assembly and the Senate, who will be open to being voted out at the whims and fancies of those in position to garner absolute majority in either of the chambers.

In light of this, any claim that the CPP is willing to uphold the constitution is farcical.

Arguably, the arrest warrant against Sam Rainsy, in spite of his parliamentary immunity, for a defamation case and later, his dismissal by the CPP-controlled National Assembly, provides a glimpse into the illegitimate nexus between the executive and the judiciary, in contravention of the constitutional mandate on separation of powers and judicial independence.

Another incident, which highlights the breadth of pervasive lawlessness, is the recent arrest of the sitting Senator Hong Sok Hour, which demonstrates the lack of compunction among government lawyers and judicial officers, who have strained the definition of constitutional provisions with their heterodox interpretations of the law in complete disregard for the parliamentarian's constitutionally-guaranteed immunity.

Over the past decades, the CPP has shown an uncanny ability to ingratiate themselves with the international community by maintaining their charade of constitutionalism.

It is apparent, however, that Cambodia's constitutional system is being bled to death by the very people who have been sworn in to protect it.  Their act just resembles the so-called Potemkin democracy -- a deceiving form of democracy. It remains to be seen, however, whether the leadership of the free world will take cognisance of this and demonstrate their commitment to the principles of democracy and the rule of law.

Monovithya Kem is a member of permanent committee of the Cambodian National Rescue Party.

Monovithya Kem is a member of permanent committee of the Cambodian National Rescue Party.

Systematic cooperation is needed to underpin the "public health charter" which spells out the bottom-up community efforts necessary for stemming the spread of Covid-19, according to a health expert.