Indonesia confronts extremists with their own brand of Islam
Opinion

Indonesia confronts extremists with their own brand of Islam

Nahdlatul Ulama, the world's largest Muslim group, is fighting extremism with an appeal to Nusantara, the 'Archipelago Islam' of Indonesia's moderate brand of the religion. (Photo courtesy Nahdlatul Ulama)

Speaking to a traditional Javanese soundtrack, a Muslim cleric implores: "We invite others to join us in launching a mental revolution."

The invitation comes in a scene from a documentary made by Indonesia's largest Muslim organisation, Nahdlatul Ulama, as part of a campaign to discredit the ideology of the Islamic State (IS) and other extremist groups.

The documentary, titled Rahmat Islam Nusantara (The Divine Grace of Malay Archipelago Islam), seeks to highlight the brand of tolerant Islam that has been practiced in Indonesia for centuries.

"We need to revive the idea of Islam Nusantara as we are confronting the danger of radicalism, to remind Muslims that we have an Islamic civilisation that is different from that in the Middle East," says Yahya Staquf, head of Nahdlatul Ulama's advisory council.

"Not only do we seek to refute the extremists' theological claims, but also show that for hundreds of years Muslims in Indonesia have lived in harmony with other faiths," he said.

The documentary, made in partnership with the Vienna Observatory for Applied Research on Terrorism and Extremism, focuses on the role of Walisongo -- nine saints -- who introduced Islam to the archipelago from the 14th century to the 16th century.

It is believed that the nine saints helped Islam gain a foothold in Indonesia because they blended Islamic practices with pre-existing traditions from Hinduism, Buddhism and other faiths. By doing so, the film argues, they created a more tolerant brand of Islam.

According to the documentary, this legacy inspired Indonesian founding fathers to establish the newly independent nation in 1945 as a multi-religious, rather than Islamic state.

"Indonesian Islam is not an Islam that is angry," said President Joko Widodo, who has on several occasions spoken of Indonesia as the "leading light" of the Islamic world.

"Indonesian Islam is an Islam that is civil, full of compassion," he said at the presidential palace earlier this year. 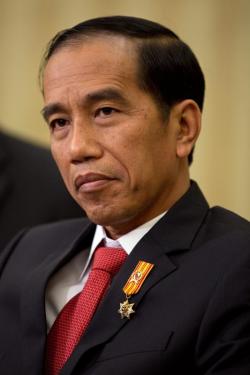 President Joko Widodo: "Indonesian Islam is an Islam that is civil, full of compassion." EPA

Nahdlatul Ulama, or Awakening of Islamic Scholars, was founded in 1926 amid concerns among traditional clerics in what was then the Dutch East Indies about the growing influence of Islamic puritanism from Saudi Arabia, known as Wahhabism.

"Indonesian Islam can serve as a counter-narrative to radical Islam," said Ulil Abshar Abdalla, an Islamic scholar who founded the Liberal Islamic Network.

"Radical Islam mostly originates in the Middle East because it has been the scene of long-running geopolitical conflicts, while Southeast Asia is relatively more stable," he said.

Some Islamic groups in Indonesia are less keen on the message that Nusantara Islam sends to believers and the wider world.

The head of the hardline Islamic Defenders Front, Rizieq Shihab, called the movement an affront to the religion.

"They reject Islamic teachings by using the pretext that they are Arab culture," Mr Shihab said on his website.

"In the name of propagating local wisdom, they are slowly but surely seeking to eradicate Islam."

Its government is secular and the country has sizeable Christian, Hindu and Buddhist minorities.

But Indonesia is not without extremist problems.

It was the scene of major attacks by Islamist militants for a decade until 2010, notably the 2002 Bali bombings in which 202 people were killed.

Hardline Sunni Muslims have attacked members of smaller Shi'ite and Ahmadiyya groups, accusing them of trying to propagate deviant versions of the religion.

The national counter-terrorism agency estimates that 500 Indonesians have travelled to the Middle East to join the Islamic State, with several of them killed in combat.

The agency has warned that returning militants could pose a security threat.

"IS remains a very tiny minority, even among extremists in Indonesia," said Sidney Jones, a long-time Jakarta-based terrorism expert at the Institute for Policy Analysis of Conflict.

Nasir Abbas, a former militant who has helped Indonesian authorities in their efforts against radicalism, said Nahdlatul Ulama's campaign using the film was unlikely to sway hardcore elements, but it could prevent ordinary Muslims from flirting with extremism.

"It is important for influential groups like Nahdlatul Ulama to speak out against extremism," he said. "We should tackle seeds of radicalism early on.'' dpa