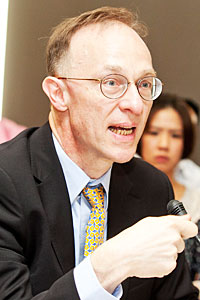 An ageing society poses a challenge to Thailand which has the highest share of elderly people of any developing country in East Asia and the Pacific. BANGKOK POST PHOTO

Asian societies are ageing, and Thailand is ageing rapidly. Already over 10% of the Thai population, or more than 7 million people, are 65 years old or older. By 2040, a projected 17 million Thais above 65 years of age will account for more than a quarter of the population. Together with China, Thailand already has the highest share of elderly people of any developing country in East Asia and the Pacific, and it is expected to have the highest elderly share by 2040. A recent World Bank report, "Live Long and Prosper: Ageing in East Asia and Pacific", discusses ageing in Asia and how countries can address the resulting challenges, and take advantage of emerging opportunities.

In many ways, ageing is a consequence of development success in Thailand -- people live longer, and fertility has come down rapidly from the unsustainably high levels of earlier decades.

But every success brings new challenges and ageing is no exception. For example, the size of the working age population in Thailand is expected to shrink over 10% by 2040. Thailand has exhausted its "demographic dividend", and future growth and improvement in living standards will largely come from rises in productivity. In addition, households headed by elderly Thais are twice as likely to be poor as those in their 30s and 40s, and in most cases are not covered by formal sector pension schemes.

Thailand and some other developing Asian countries are "getting old before getting rich", so the potential of the state to manage rapid ageing is more constrained than in today's developed countries, which grew rich while their working age populations were still growing. At the same time, Thai people's expectations are high. In a recent survey across Asia, two thirds of Thais said that they expect the state to be their primary source of financial support in old age. Across the world, balancing such expectations with fiscal feasibility has involved a sustained role for non-state financing of services and benefits for the elderly. Thailand is likely to be no different.

What can Thailand and other ageing societies do? The first step is recognising that rapid ageing is not just about old people. It concerns everybody. A broad range of policy reforms and behavioural changes will be important to address the challenge. This starts from policies which influence how families make decisions about having children, and strengthening public support for child care and related polices to balance work and family life. It continues throughout working life with enhanced need to promote adult learning, and reforms of labour and taxation policies to promote long and productive working lives, as well as migration policies to attract young workers. Reforms will also be needed to ensure that social security, health and long-term care systems achieve wide coverage and adequate financial protection for the elderly, while ensuring that public spending remains sustainable.

We know from the experience of rich countries in Asia and in other parts of the world that societies take time to make the changes to address ageing. For example, like other ageing societies, Thailand will need to increase its official retirement age in line with rising life expectancy, both to increase labour force participation among urban Thais and to keep public spending within affordable limits.

There is good news for Thailand, however, when considering ageing. First, many Thais already have long working lives and work well beyond the ILO definition of "working age" of 64 years old. Second, the Thai healthcare system has undergone reforms in areas like how health providers are paid which puts the country in a better position than most countries to manage the healthcare needs of an ageing population. Third, social pensions in Thailand provide a floor of financial support for older Thais, albeit a modest one presently.

Ageing across Asia may also present new opportunities for Thailand. Demand for medical tourism for example should increase, and Thailand is well placed to capture a solid share of the growing market. Similarly, it is likely to see increased demand for affordable retirement among elderly from other parts of the region. And Thai elderly people themselves will offer new market opportunities in sectors such as health and aged care, financial services, technology and robotics.

Undoubtedly ageing poses new challenges for Thailand in sustaining growth, managing public finances, and supporting living standards. Thailand's government, employers and workers, and families have the opportunity to take a comprehensive approach to managing rapid ageing and thus achieve healthy and productive aging. In this way, Thai society as a whole can live long and prosper.