In an under-achieving and worrying economy, there has been one clear success. The statistics are impressive from every angle. Last year, 29.88 million tourists put 2.21 trillion baht into the economy.

The minister of Tourism and Sports said she expects that will go up to 32 million people and 2.3 trillion baht this year. Thailand is in the world's top 10 countries for foreign tourist arrivals, and Bangkok is the world's single most visited city.

This comes at a cost -- and a fairly hefty one at that. Tour buses tangle Bangkok traffic. Environmental damage is inevitable, with actual traffic jams at "unspoiled" national parks such as Doi Inthanon in Chiang Mai and Phu Thap Boek of Phetchabun, and these are only a few examples.

Purists complain of vastly different behaviours of foreign visitors. The Chinese are the current, popular targets for occasional boorishness, but other foreign cultures have tested tolerance with unacceptable topless sunbathers, public drunkenness and worse.

There also are real costs. Two closely linked problems are currently undergoing reform, with an aim to raising the standards. One is to protect the millions of foreign guests visiting Thailand. The other is to protect the country from the tiny number who aim to take advantage of Thai hospitality to create trouble and break laws.

A wide range of security forces and top-notch supervisors are necessary in these two linked and overlapping duties.

On the national security front, there are two major programmes currently under way to upgrade the systems. The most obvious project has been by the Immigration Bureau. The commissioner, Pol Lt Gen Nathathorn Prousoontorn, is in the process of establishing the most wide-ranging and important revision of immigration procedures in memory.

While it involves major changes, Pol Lt Gen Nathathorn has reduced the overhaul which he revealed on the Bureau's new website in the New Year: "Good guys in, bad guys out".

This two-part policy aims to streamline immigration procedures for visitors, while putting up barriers for those trying to bend the law. 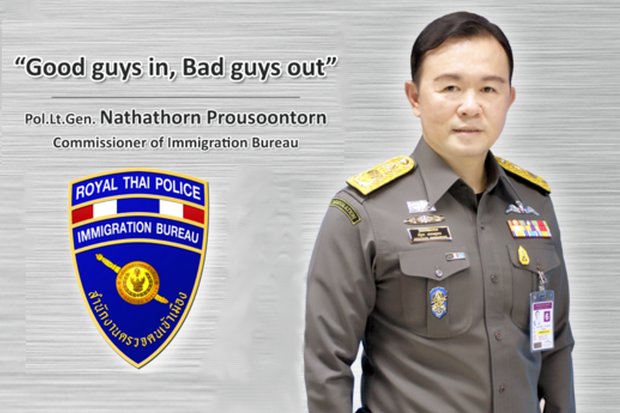 From the revamped home page of the Immigration Bureau at immigration.go.th.

New tourist visas now are available at Thai embassies and consulates. Meanwhile, the long-time policy of looking the other way to visa overstays is about to end. Beginning in March, overstayers will be fined and blacklisted for years.

Pol Lt Gen Nathathorn and the Immigration Bureau hope to make it difficult, uncomfortable and risky for illegal workers on tourist and education visas.

Keeping visitors safe is often tough. Tourists including Thai tourists sway towards carelessness while on holiday.

Tourists and regular police will be increasing patrols to try to prevent mishaps. Police hope to make it more difficult to drink and drive, while also attempting to ferret out the myriad types of criminals -- ATM cheats and con men, drug and human traffickers, smugglers of animals and animal parts, not to mention the criminal element drawn inevitably to tourists.

These are all hugely important. Tourism is the face and image of Thailand to the world, and an important part of an otherwise faltering economy.

Tourism security now also includes the additional lay of anti-terrorism. Bangkok has recently attracted international terrorists. The current threat is the Islamic State. But with an open society and welcoming border posts, there are other groups that would try to create havoc if given the chance.

Only high vigilance, and even more importantly international cooperation will properly secure the country. Officials constantly tweak and reform anti-terrorist operations to meet the latest threats.

Tourism brings high rewards for Thailand, but it is a double-edged industry with high risks as well.