Myanmar's new members of parliament are convening in the legislature Monday. The first session since their election in November last year, this marks a significant step in Myanmar's road to full and genuine democracy.

But with the military still holding 25% of the parliamentary seats -- a requirement in the 2008 constitution -- and three ministers in cabinet -- defence, interior and border affairs -- the new government will inevitably be a power struggle between the National League for Democracy (NLD) and the army.

Aung San Suu Kyi's pro-democracy party, the NLD, has 390 seats in the national assembly, comprising the lower and upper houses. In fact the NLD has an absolute majority in both houses, and with a number of ethnic parties that won seats that will support the new NLD government, including the Shan Nationalities League for Democracy (SNLD), it will hold more than 60% of the seats. That's short of the 75% needed to change the constitution. 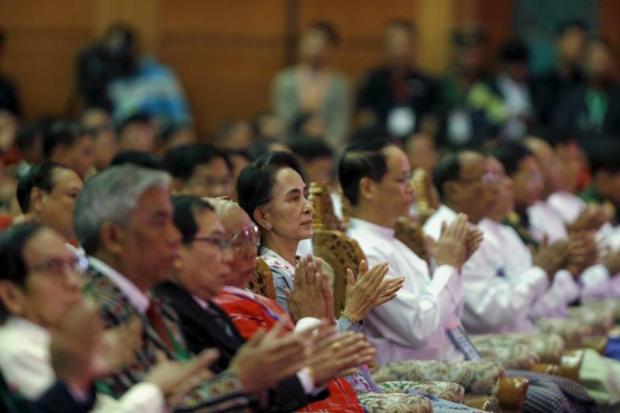 Pro-democracy leader Aung San Suu Kyi in Naypyitaw. The opening of parliament today, with Suu Kyi's National League for Democracy (NLD) and coalition parties as a majority, will mark the transition of power from the quasi-civilian Thein Sein government although the 2008 Myanmar constitution lets the military keep a prominent role. Reuters

The opening of parliament is only the first formal stage in the transition of power from the quasi-civilian Thein Sein government, which replaced the military regime of senior general Than Shwe, to the NLD-led government of Ms Suu Kyi.

Speakers will be appointed who will then oversee the significant appointment of the new president, who in turn will appoint a cabinet.

Earlier plans to buck the constitution -- which prohibits her from being the country's head of state because she was married to a foreigner and her two sons are citizens of a foreign country -- and appoint Ms Suu Kyi as president have been ditched, largely as she had more pressing concerns to attend to, according to NLD insiders. The president or other executive members cannot take part in the day-to-day activities of their political party.

She wants to remain head of the NLD, reform the party and oversee the delicate transition, a number of top party officials told the Bangkok Post. Only Ms Suu Kyi as NLD chairman can make public statements on party policy and the transition process. So far she has refused point blank to reveal whom the NLD's choice for president is.

The party has long insisted it has someone in mind, but kept it a secret because of the sensitivity of the transition process, senior party executives have repeatedly said. But as the presidential election draws near, many party insiders believe Htin Kyaw, an unassuming man, who has been close to Ms Suu Kyi, will be the NLD's candidate. He is currently a senior executive of Ms Suu Kyi's charitable foundation, Daw Khin Kyi, named after her mother.

Htin Kyaw has all the credentials to be Aung San Suu Kyi's "puppet president" as she has continually insisted she will be above the president and effectively running the government. Crucially, he is the son-in-law of U Lwin, one of the founders of the party and its key executive during Ms Suu Kyi's long term of house arrest.

He has also served as her driver at various times when she was released. His father, Min Thu Wun, was a renowned poet who earned the official title of National Poet.

A graduate of Oxford University in 1972, Htin Kyaw is a writer in his own right under the pen name Dala Ban -- or Mon Warrior, a name his father gave him when was only three months old.

His family's political credentials also stand him in good stead. His father was elected an MP in the 1990 elections that the NLD convincingly won (but were not allowed to govern by the military). He was also selected to head the new government at that time, as Ms Suu Kyi was under house arrest. He has since passed away.

Of course Ms Suu Kyi may change her mind, many senior NLD members have warned, but at present Htin Kyaw is odds-on favourite to replace Thein Sein as president later this month. Aung San Suu Kyi has yet to inform the central executive who she has chosen for the presidential post -- or the other vice-president to be elected by the upper house.

The presidential poll is expected to take place later this month or early March. Both the upper and lower houses each elect a vice-president, and the military MPs nominate their own choice.

The president is then elected at a joint sitting of the parliament from the three vice-presidents -- the other two remain vice-presidents and are part of the new executive, which takes power officially at the end of March.

So the NLD will propose two vice-presidents, one in each house. The key one seems to be Htin Kyaw. There are two others close to Ms Suu Kyi who have emerged recently as possible candidates.

The most recent to rise to prominence is Moe Zaw Oo. In his late 40s, he is a former political prisoner and an NLD Youth leader since 1988. He was recently promoted to chief-of-staff in the NLD chairman's office. But while he is no doubt trusted, he is likely to play a crucial role in reforming the party, rather than as a member of the executive.

Moe Zaw Oo's predecessor, Tin Mar Aung, is also tipped as a candidate. She has been Ms Suu Kyi's chief of staff since her release from house arrest in 2010. A medical doctor, she worked for Unicef, before joining the NLD leader's inner circle.

Larry Jagan is a specialist on Myanmar and a former BBC World Service news editor for the region.

Myanmar's crises: A recipe for disaster