Plu Jibong has a burning question: Why must Karen forest dwellers in Kaeng Krachan National Park suffer violent eviction and forced resettlement when his Karen peers in Thung Yai-Naresuan Wildlife Sanctuary can live in peace?

The question took Mr Plu and a group of Kaeng Krachan Karen to Thung Yai last week. The trip for them was specially urgent. The government wants Kaeng Krachan National Park in Petchaburi to become a World Heritage Site like Thung Yai-Naresuan in Kanchanaburi. But with their misery from land rights conflicts still unresolved, will the World Heritage scheme make the lives of Kaeng Krachan forest dwellers even more difficult?

Mr Plu returned home with the answer -- and a much heavier heart.

"In Thung Yai, forest dwellers are accepted as forest conservationists. In Kaeng Krachan, we're condemned as forest destroyers who must be arrested, evicted and removed from our ancestral land."

The Thung Yai model based on mutual respect and joint cooperation between forest officials and forest communities can save not only the Kaeng Krachan Karen but also over 10 million people in national forests. But after four decades of being a wildlife sanctuary and two decades and a half of being a World Heritage Site, forest management in Thung Yai remains an exception to the norm.

The culprit is the draconian forest law and hard-line policy which does not recognise forest peoples and treats them as criminals. Even in Thung Yai, forest officials still routinely risk reprimands from superiors in Bangkok for allowing the farm rotation system to continue.

During his Thung Yai visit, Mr Plu's usually sad face became even more grim. The thick lush forest. The running brooks. The morning fog. The towering betel nuts and fruit trees. The wild cooked rice that tastes exactly like it does at home.

"Our forests where we used to live are exactly like here," he said, his eyes reddened. "The Karen in Thung Yai can stay in their forest homes because officials respect their ways and listen to them. We want to return to our forest homes, but forest officials refuse to listen to us."

To qualify for the nomination, Thailand was told it must resolve disputes with indigenous communities, end forest evictions, establish joint guidelines with locals on the use of land and natural resources by affected communities, gain local consent on World Heritage registration, ensure the indigenous people's participation in forest management and set up a participatory mechanism to solve future disputes.

That will take time. When the ploughing season nears, the Karen's immediate concerns are the ability to clear fallow plots in the forest to grow rice and vegetables as their ancestors had been doing for centuries without fear of arrest.

Will that be possible? When they asked new Kaeng Krachan National Park chief Kamol Naulyai who also attended the Thung Yai-Kaeng Krachan forest dwellers' gathering to build dialogues, his uneasiness was apparent. He, too, has his own fears.

"I'm open to change," he said. "But we need to follow the law. If we don't, there are certain people who are ready to stab me in the back."

For Mr Plu and other Kaeng Krachan Karen, the prohibition against clearing fallow plots is tantamount to being told to starve. 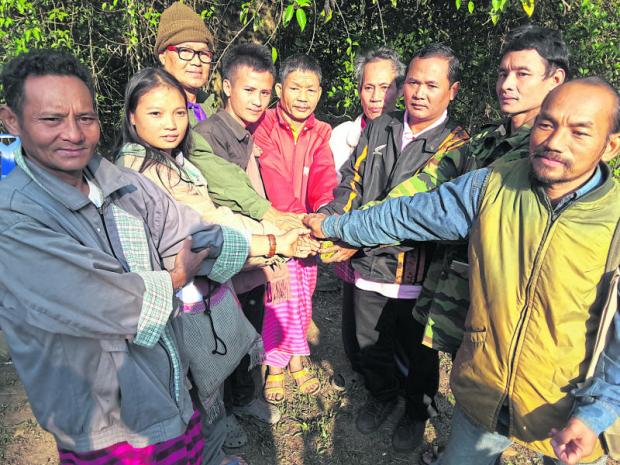 Rotation farming is part of Karen forest dwellers' cultural heritage. In the old days, they left the plots to recover for up to 10 years, or longer, before returning to till them again. By then, the area would be lush and fertile again. When the Karen clear the fallow plots for a new round of rice and vegetables, forest officials arrest them for destroying good forest.

"I used to think like that too," said Veeraya Ochakul, chief of Thung Yai Wildlife Sanctuary.

"That changed after I came to understand the Thung Yai Karen forest dwellers' way of life close to nature," she said. "They have been living here long before the forest was declared a wildlife sanctuary. If they retain their old ways, people and forest can co-exist."

Seven forest settlements in the 2.2-million-rai Thung Yai use about 20,000 rai of land for rotation farming. Despite concerns over population increase, the farm areas have stayed constant during the past decade while Thung Yai's rich forest remains largely intact, she said.

Billowing smoke from land clearing spotted by helicopter spot checks often gave the park chief stern reprimands from higher-ups. Instead of arresting Karen peasants to avoid punishment for negligence, Ms Veeraya chooses to explain to Bangkok bosses that the plots in question are actually within the rotation farming zone agreed upon by forest dwellers and officials. She also sends them regular reports to ensure they know Thung Yai remains in good health.

For this system to work, Karen communities must also have their own strict rules and regulations. No mono-culture cash crops are allowed. If anyone strays, the whole community risks official investigation.

"Don't worry," said Suwan Chokesricharoen, leader of Koh Saderng forest community. "Our cultural rules based on religious belief govern our lives from cradle to grave. It's much more strict and effective than any state law."

Apart from relative inaccessibility, the history of Thung Yai is crucial. The wildlife hunting scandal by junta men in Thung Yai fanned up popular anger leading to the 1973 student uprising. The Nam Choan Dam project in the late 80s also cemented a broad alliance of wildlife sanctuary officials, Karen forest dwellers, and urban environmentalists regionally and nationally. By the time Thung Yai was declared a World Heritage Site in 1991, the Karen forest dwellers were already accepted as part of the scene.

But it has not always been plain sailing. "We also faced relocation threats," recalled Tong Liyeng from Kong Mongta village. "We've seen before how the lives of Sangkhla Karen were destroyed after being relocated. So we resisted, using our Karen culture and identity to unite and fight together."

According to Karen scholar Apichart Setapan, Thung Yai is not just a jungle; it is a sacred place governed by a strict religious belief system, codes of conduct and powerful natural spirits. Violation is believed to bring upon them bad fortune, illnesses and death.

Thung Yai also has its cultural heroes and legends that make Thung Yai confident of their cultural identity.

"We Thung Yai Karen have our ideology. It's to live a simple life under Buddhist teachings, avoiding hurting others and nature, so we can be reborn in the era of the next Buddha, Phra Sri Ariya Maitreya," he said.

The Thung Yai Karen also share common religious rites and festivals that unite them as one. "Our strict adherence to our cultural identity has convinced forest officials to allow our ways to continue."

Unlike in Thung Yai, the Karen forest dwellers in Kaeng Krachan are more fragmented. Some, like Mr Plu and his relatives, used to live a primitive life deep in the forest. Each individual homes is isolated, making joint efforts to resist forced relocation impossible. Others have long been resettled, long subject to central control, and struggling under a cash economy.

"They're now like bees after the honeycomb is attacked, fleeing in shock, losing strength and direction," said Mr Apichart sympathetically.

But it seems the bees are regrouping, emboldened by their Thung Yai visit. The World Heritage label may not bring the Thung Yai Karen clear benefits, but it is not the case for Kaeng Krachan.

Making use of the World Heritage Committee's prerequisites to respect indigenous people's rights and consent, they joined the Karen Network for Culture and Environment to present their demands through the International Union for Conservation of Nature.

The demands include allowing traditional rotation farming, allowing the Karen to pick the sites of their own dwellings, setting up a joint panel to settle land use and farming disputes and respecting Karen cultural identity and human rights.

Otherwise, they said, the indigenous forest dwellers will not accept the nomination of Kaeng Krachan National Park as a World Heritage Site.

"It's an uphill battle," said Mr Plu. "Honestly, I still can't figure out how to make forest officials listen to us. But Thung Yai has reminded us of home, given us hope, and shown what awaits us if we prevail."