A monk riding on a trishaw commutes past a commercial billboard by a local food company with portraits of Myanmar democracy figurehead Aung San Suu Kyi and President Htin Kyaw displayed on a street in Yangon on April 18. AFP

A tenuous civilian-military dance. Simmering Burman Buddhist nationalism. An impatient populace that is struggling with rising prices and power cuts, amid record-high GDP growth. A popular but inexperienced political leadership inching toward what some call "liberal authoritarianism".

All these make for a powder keg of apprehension and impatience, at times reluctantly expressed but nevertheless real, that is fast tempering the heady optimism about Myanmar's political change nearly two months into the Aung San Suu Kyi-led government.

This sense of discomfort peppered much of the insights from political figures to business people to academics and activists at the Myanmar Forum 2016, which was organised by the Institute of Southeast Asian Studies (ISEAS) in Singapore on Friday.

"It's not only that people expect too much ... but people are trying to endure," political leader and activist Ko Ko Gyi said, adding that Myanmar people are impatient after decades of deprivation not only for political freedoms but for the basic essentials of life. 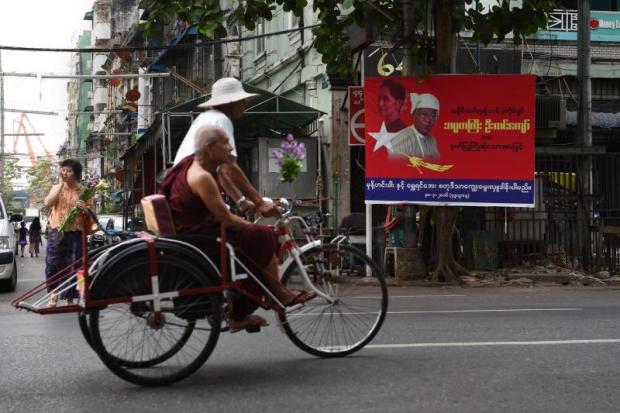 A monk riding on a trishaw commutes past a commercial billboard by a local food company with portraits of Myanmar democracy figurehead Aung San Suu Kyi and President Htin Kyaw displayed on a street in Yangon on April 18. (AFP photo)

Ko Ko Gyi, general secretary of the 88 Generation who spent 19 years in prison under the military regime, used an anecdote about frequent power outages to explain that youngsters may not be as patient as older people who were part of the pro-democracy struggle when it comes to waiting for change.

"I can endure [things like] what was my second home, my prison. But my nine-month old baby daughter, when the electricity is shut down, she cries a lot," he said. "I'm just always holding the fan in the hand but I try to endure this because I want the National League for Democracy [NLD party] to [achieve] success. So many Myanmar people have expectations but they are ready to endure."

The government led by State Counsellor Suu Kyi and her NLD does not have a lot of time to produce results and must urgently decide on its priorities, Ko Ko Gyi said, be it about the peace process, constitutional changes and policies on the economy, electricity, education.

"This is not an everlasting period. It's about how much our people can endure," he added. "In the short, medium and long term, we need to set priorities. If not, we are talking about a variety of issues but we cannot solve anything."

The NLD has not been laying down concrete policy, instead issuing "rhetorical" pronouncements on foreign and economy policy, said Min Zin, an analyst and a veteran of the 1988 student uprising. "[As activists] we tend to confuse, conflate slogans with programmes. The NLD government is now suffering from this confusion."

In March, the Suu Kyi-led government announced a 100-day programme, which is to have started on May 1, to show quick results. The government said it would make daily announcements about this on Facebook and a phone hotline, but there have been few details.

A feeling of waiting -- and more waiting -- for the government to make decisions and lay down policies reigns among different sectors.

The deep fissures in Myanmar society, and the gulf between state and society, make the stakes of inaction or miscalculation by the NLD even higher. These fissures include trust issues between the government and the ethnic groups, the unstable compromise between civilian and military and decades-old distrust across communities in society.

"If we had to reduce the problems of the peace process to one word, it would be trust-building," said Kyaw Yin Hlaung, director of the Center of Diversity and National Harmony.

The end to ethnic groups' fighting came during Thein Sein's military-backed government due to "personal-based trust between negotiators from both sides", he recalled. "This is the legacy of Thein Sein," Kyaw Yin Hlaung said. "But the government never managed to build this trust at the systemic level."

Despite the NLD government's decision to hold a "21st century Panglong Conference" with ethnic groups, few expect radical change from it.

The military has the edge when it comes to dealing with ethnic unrest, not least due to the pressure to produce results.

"Suu Kyi does not have much preparation on how to proceed. At the end she will likely adopt the military position as a default policy choice," except for small changes like giving a new name to the organisation leading the peace process, Min Zin said. "Politically speaking, her view is more or less the same as the military."

"The almost impossible barriers to overcome are the deep divisions in Myanmar society. It's a sense of despair, especially from ordinary people, about the future of their kids," the University of Washington's Mary Callahan said. Over six decades of repression under a national-security mindset, on top of their isolation from the outside world, Myanmar's people have had "negative socialisation over and over and distrust of anyone outside your intimate circle", she said.

This same distrust of a "broken" society later bred "deeply distorted expectations" of Ms Suu Kyi if she ever came into power, Ms Callahan added.

"It's been 15, 20 years since taxi drivers and rickshaw drivers have been telling me that when Aung San Suu Kyi is elected, there will be no more traffic, corruption, floods like last year, dengue fever. Street dogs will be gone and global warming will end, and everyone will have electricity for 24 hours," she told the forum. But as patience thins, people now call the power outages "Daw Suu power cuts", Ms Callahan said.

While moves like the release of political prisoners are welcome, these are "elite-level reforms" that don't affect people's ordinary lives much, she said. They are more concerned about land-grabbing, poverty and inclusive growth.

"The opportunity has been opened for the new government, as the NLD holds 80% of seats. They can amend the law or dissolve an existing law by simple majority. This is easy to implement; this is the opportunity," Ko Ko Gyi pointed out. "How much can we make use of this opportunity? How can we improve the daily lives of people?"

Not a few reminded Ms Suu Kyi that her pro-democracy origins require her to use consultative processes -- and look beyond today to build democratic institutions that will make sure democratisation stays.

Putting the NLD in electoral power is not the be-all and end-all of the struggle for democracy, so "there is a need to bring in all stakeholders", Min Zin stressed, including civil society that has been sidelined by the government. "The goal must be go to beyond getting an electoral mandate; otherwise, what we have is benevolent authoritarianism."

ISEAS' Tin Maung Maung Than questioned the huge political power in Ms Suu Kyi's hands after the state counsellor's portfolio was created to make her the country's top leader in addition to her two cabinet posts. "We are changing from illiberal pluralism to liberal authoritarianism -- but it can still change from illiberal pluralism to quasi-liberal democracy too because it's only been less than 100 days."

As it is, Tin Maung Maung said many find worrisome the arrests of anti-government protesters, since these sectors, which include workers, are part of those who invested in the democratic struggle.

"They [the government] need to listen to what is really happening, but only getting information from the party is not enough," Ko Ko Gyi said. "We need to make open civil society and local media, so they can have a different perspective to find a solution."

NLD has tended to "sideline mediating institutions" like civil society, political parties and media, but their involvement is key to governance, Min Zin pointed out. Ms Suu Kyi's bypassing of these is creating "a populist sentiment such as the Suu Kyi consensus, and if you deviate from the Suu Kyi consensus, you will be named and shamed, especially in social media", he warned.

Johanna Son is a Filipina journalist and editor who follows regional issues and runs the 'Reporting Asean' programme. She has been based in Bangkok for 16 years.

Founder/editor of the Reporting ASEAN series

Johanna Son is founder/editor of the Reporting ASEAN series.