Regime must give public facts,not fiction

A portion of the Bangkok skyline at sunset. The government insists the Thai economy is "in the green zone" with favourable economic growth figures. (Photo by Seksan Rojjanametakun)

Refreshed after a long-weekend break, General Prawit Wongsuwon, the "Big Brother" of the ruling National Council for Peace and Order, could not keep the "good news" to himself on Monday.

Emerging from a briefing by a team assigned to resolve the illegal, unreported and unregulated (IUU) fishing issue with the European Union (EU), the deputy prime minister for national security jovially told reporters: "Thailand has not been given a red card ... eventually we should be able to get a green one."

In other words, Gen Prawit meant the European economic bloc which issued a yellow-card warning to Thailand in April last year would not ban the country's seafood exports.

"Our efforts in combatting IUU fishing have won us an admiration from the EU," he told reporters.

But a few hours later, spin doctors at the NCPO secretariat and the Ministry of Foreign Affairs, had to issue a "clarification" in both Thai and English to say that "His Excellency" "merely stated that during the latest round of dialogue with the EU [May 17-19], the EU did not reach any decision on the red card or yellow card. Thus, Thailand still has time to work on this matter before such a decision will be made, and Thailand reaffirms its commitment to continue working to tackle the problem."

Contrary to Gen Prawit's statement, the EU said in its April 21 release that Thailand proposed an action plan to address shortcomings and the European Commission is currently evaluating progress.

"The dialogue is proving difficult and there remain serious concerns about the steps taken by Thailand to fight IUU fishing activities. This means that further action by the commission cannot be ruled out." The next round of talks will take place in Bangkok in July.

So, how did we hear different stories on the same issue? Was Gen Prawit misinformed by his staff? Was it a deliberate bid to give the Thai public a feel-good answer?

Another gaffe from the same interview was his statement comparing the Thai economy with those of its neighbours.

The deputy chief of the coup makers was upset by a reporter who asked him to react to former prime minister Yingluck Shinawatra's accusation that post-coup Thailand has been hit by economic hardship, poverty and critical social issues as the NCPO has never kept its promises.

"What didn't we deliver? We are the only country whose economy is in the green zone … do you want to be in the red zone like others. The National Economic and Social Development Board (NESDB) already showed us [the economic growth figures]."

Gen Prawit was right about the press conference by the national economic planner last week, which said Thailand's GDP growth hit a three-year high of 3.2% in the first quarter, thanks to massive government stimulus measures and a rapid tourism sector improvement.

The NESDB also revised up its growth projection for the whole year to a range of 3-3.5% from 2.8-3.8% after seeing higher-than-expected data in the first quarter. But the country's security czar was completely wrong about growth in other countries, presumably our Southeast Asian neighbours. 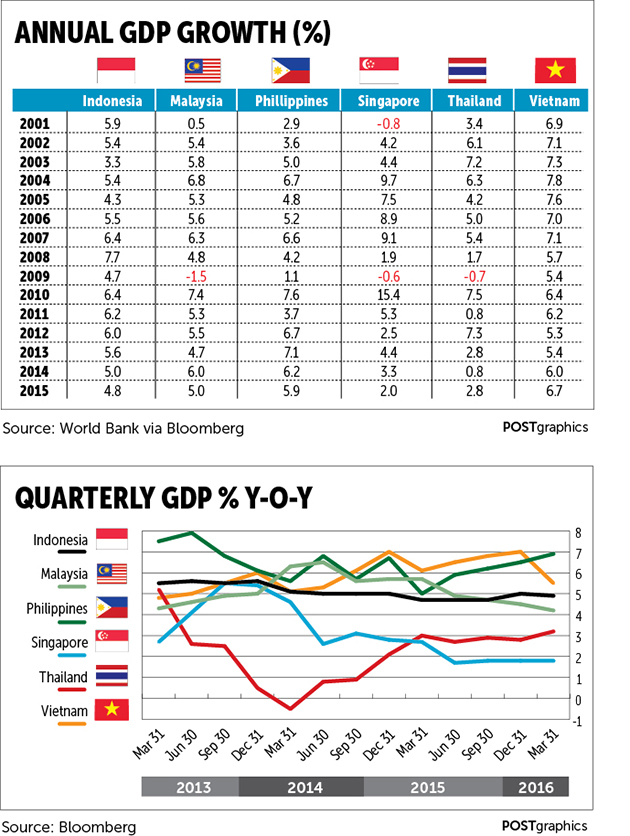 Most of our friends in the Asean 6 also registered growth rates or were in the "green zone" for the first quarter, and some are "greener" than Thailand's.

The Philippines, whose outgoing civilian administration of President Benigno Aquino III was credited for the country's robust growth, reported the highest growth rate of 6.9% while Asean's largest economy, Indonesia, reported a 4.9% growth rate.

Despite falling global energy prices and a major political scandal that has plagued the government of Prime Minister Najib Razak, Malaysia's economy expanded by 4.2% in the January-March period from a year earlier.

Vietnam, which has recovered from its financial crisis, saw its economy slow in the first quarter to 5.46%, down from 6.12% a year earlier, thanks to low oil prices and ongoing drought that has hit the farming sector severely.

Singapore, Asean's most advanced economy, saw a 1.8% annual growth rate during January-March 2016, the lowest among the six countries as it was feeling the effects of the global economic downturn and China's weakening economy.

Although the NESDB and the ruling generals may be optimistic that 2016 growth could be higher than 3%, international rating agency Moody's Investors Service disagrees.

Moody's forecasts Thailand's GDP will expand by only 2.8% in 2016 and 3% in 2017 as household debt and domestic political uncertainty weigh on private consumption amid a lack of structural improvements for the country's export-oriented manufacturing infrastructure.

Given the array of economic challenges ahead domestically and globally, the ruling generals and their economic policy makers may want to get their basic facts right and tell the people honestly what they will be facing in the near future.

After two years in power, with little success in narrowing political divisions among the people, the regime may be under pressure to create "feel-good" factors. But this will all be useless if it is not based on fact.