According to media reports, a young British woman claimed she was drugged and raped on Koh Tao. After a preliminary investigation which presumably did not include forensic analysis by a rape expert, the police concluded no crime took place because -- wait for it -- the tide was too high. 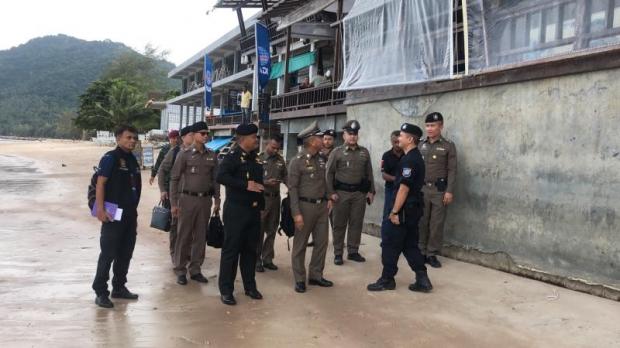 Surat Thani police officers inspect an area near a Koh Tao resort where a British woman claimed she was drugged and raped.  Supapong Chaolan

Based upon this "evidence", warrants have been issued for numerous individuals including foreign nationals for violating the computer crime act by posting the story online. National and international media have published accounts of the incident and the response by Thai police, which adds to the already black image of Koh Tao and Thailand.

Why not treat the initial complaint seriously and without prejudice and refrain from persecuting netizens? The international community responds well to those who are willing to be responsible and can lose face gracefully when necessary. The police continue with their myopic conduct at the nation's peril and would be well advised to learn behaviour consistent with being on a world stage.

I have a suggestion for Big Joke [deputy tourist police chief Surachate Hakparn] and his busy band of investigators defending Thailand's reputation by arresting Facebook posters. Elon Musk in his inflamed anger at being reminded he knew nothing about cave rescue did what millions of people around the world do added to Thailand's reputation for illegal sexual escapades and the existence of grey-haired European living here, and instantly concluded that Vern Unsworth was a "paedo". It's almost certain Mr Musk knows nothing about the man but made an all too common assumption.

Perhaps in an attempt to pay back some of the goodwill owed to Mr Vern and his cave diving rescue friends, the Thai authorities could rush up to Chiang Rai, investigate yet another incident that didn't happen and publicly announce that Mr Unsworth has never been implicated, suspected or involved in any illegal sexual activities, which anyway don't exist in Chiang Rai. A ban on Mr Musk's return to Thailand and a threat of a defamation suit for insulting a man who has shown remarkable goodwill to this country is the least we should expect from our moral crusaders.

Following the death this week in an accident on an elevated expressway, it was reported in the Bangkok Post on Sept 4 the deputy city police chief stating: "The hard shoulder has never been a regular traffic lane" and that the authorities would look at clamping down on drivers who treat the hard shoulder as an extra lane during rush hours.

I think neither the deputy city police chief or others responsible for the expressways use them on a regular basis as the narrow strip intended for broken down vehicles and emergency vehicles is, most of the time, used as an additional lane by most drivers. They make it sound like this is a new phenomenon. How many times do we see emergency service vehicles, with sirens blaring, try to get through the traffic on normal expressway lanes let alone that intended for this specific purpose?

One thing for sure is the related comment that various campaigns to persuade drivers not to use hard shoulders have all proved ineffective. Again, the usual example of the lack of proper law enforcement and driver education.

News of a senior official authoring an unsigned op-ed in the New York Times on Wednesday -- claiming that White House staffs were fighting to reign in US President Donald Trump's dangerous impulses -- says so much about the deteriorating democratic system in the US.

Despite his claim of being the "best president" the US has ever had, Mr Trump has nothing concrete to back up such a claim -- except for the currently upbeat economic condition, whose numbers and prospects rely on contemporary circumstances.

Lastly, despite being a co-author of many books, all of which about how smart and successful he is as a businessman -- Mr Trump is not known to be a book reader.

Ajarn Vitit Muntarbhorn concluded his Aug 3 article, "Can Asean deal with international crimes?" with the statement "A coherent strategy on accountability is thus pivotal as part of the universal truth that there can be no peace without justice". Present regional humanitarian and global environmental crises present enormous challenges but also opportunities for Thai diplomacy in Asean leadership.

The purpose is to co-create governance transformation in a multi-polar world beyond old school, opportunistic, Cold War tactics. One issue that figured on the United Nations Climate Change Conference agenda in Bangkok was a pivot to new initiatives in the framework of the SDGs, in particular, SDG 16 and 17: new institutions and global partnerships. The pivot issue is the long-awaited treaty on the "high seas" planned to be agreed in 2020.

It is dealing with the fact that half of the Earth is not covered by national sovereignty, also understood as the "global commons".

Formulating appropriate legal principles to govern this part of the Earth is essential for climate change negotiations of sovereign states and how agents of environmental crimes against humanity can be held accountable within their territories. The legal principles to be formulated, positively needed to co-create peace and prosperity, are related to what Nobel Prize-winning economist Elinor Ostrom researched on a smaller scale: the commons and how they can be governed "beyond States and the Market".

The leading principle of this "beyond" was coined as "Earth trusteeship" by a professor in environmental law Klaus Bosselmann during a recent Harmony with Nature dialogue with the UN General Assembly. He made his interactive dialogue speech in line with the opinions of former vice president of the International Court of Justice, Christopher Weeramantry, from Sri Lanka. A new "rule of law of the Earth" with global citizens as Earth Trustees is to be constituted facilitating the co-creation of peace and prosperity.

After reading the abysmal facts on plastic bag usage in Thailand on the Post's front page recently, I decided to no longer use them. So, my last one for fresh chicken in the local market has now been replaced by a reusable sealed plastic container. But my first visit with it showed just what a lost cause it is. The seller didn't believe it and pointed it to another local as she put her chicken in bags and both laughed loudly. My next visit and another seller wanted to put the box in a bag, as two locals saw me and had the same reaction even though I said in my best Thai that bags pollute. Nothing but laughter. So to rid the planet of this blight we need all politicians worldwide to unite and ban them.

Some countries have taken the lead and it is time for this country, as one of the worst polluters, to forget all other political ideologies and all join hands for a change, to do the right thing for everyone and not just for votes. Here is a chance for politicians to do some good but I suspect there are only a few who care about anything other than being elected. If they all agreed then no one would be disadvantaged at the next election. Do the right thing for a change, please.

Wichit Chantanusornsiri, in his recent article, thinks not paying back your student loan suggests a lack of integrity.

Well, I don't know how much he makes a month but I can tell you the reason my partner doesn't pay back his loan is because he is too poor and his wages are disgraceful.

I'm looking at his paycheck right now. He has a degree and he works for a university and, after deductions, he gets (in Chiang Mai) 10,985 baht a month. Absolutely disgraceful! Impossible to live on it let alone pay any money back! He pays his rent and looks after his father and buys his food.....and it's all gone!

One of the most frequently repeated lies that you hear on the right wing extremist Fox "News" station is that everyone's lives in America have improved since Donald Trump became president. Then how come a recent Washington Post and ABC News poll showed that 60% of the American people disapprove of the job Mr Trump is doing while only 36% approve?

I closely follow the polls and I have never seen a single poll since Mr Trump became president which showed his approval rating to be as high as his disapproval rating is currently.

Still, I admit my life has gotten better since Mr Trump became president. But that's only because I thrive on hostility!

Yes indeed, trying to enter the US consulate to obtain a new passport is like entering a prison. Although one loses money in buying a cashier's check in baht in the bank, it is far preferable to going through the horror of dealing with the consulate procedures. A passport by mail is still the best option. ThaiPost has a better, more reliable delivery reputation than the United States Post Office, CanadaPost or AustraliaPost. At least, Americans have a consulate to apply for a passport.

The Brits, according to my understanding, have to send applications to some destination overseas. Obtaining a Canadian passport is still a joy, though. The procedure is simple and straightforward. The consular staff are a joy to the world as they are incredibly competent, polite and attentive. The small waiting area is comfortable, non-threatening and delightful. Bring along a book and relax, time flies quickly.

All letter writers must provide a full name and address. All published correspondence is subject to editing at our discretion