Tris Rating expects demand for housing in Thailand to drop by 10% this year, as negative factors outweigh positive ones. The major negative factors include the new loan-to-value (LTV) rules imposed by the Bank of Thailand, an expected decline in Chinese buyers, and political uncertainty.

In addition, the number of non-performing mortgage loans is rising, as are developers' inventories of unsold condominium units. Both of these facts are key concerns for regulators and banks. The key growth drivers remain low interest rates plus the expansion of mass transit in Greater Bangkok.

Demand for condominiums will be directly affected by tougher lending rules and the slowing Chinese economy. For housing priced at less than 10 million per unit, the central bank reduced the LTV limit to 80% from 90-95% for a second mortgage contract, if the first mortgage period is less than three years. The LTV will be reduced to 70% for the third and subsequent mortgage contracts for all housing price ranges.

In our view, these changes will affect demand for condominiums more than demand for landed properties. This is because many people purchase a condominium unit as a second home or investment property. However, the LTV limit will not affect first-time homebuyers. So, in our view, the new LTV rules should affect around 10-15% of homebuyers. Foreign buyers usually have to make a down payment equal to 20-30% of the unit price. Thus they are more likely to complete the transfer rather than walk away and lose a large sum. Thus, we believe a slowdown in China or other nations is more likely to affect demand for new units rather than transfers of units already under contract.

Tris Rating expects the leverage levels of rated developers will rise. This is because demand is likely to decline and the number of unsold units will rise, should developers continue to launch new projects. In addition, some developers are investing more in commercial properties such as shopping centres, office buildings and serviced apartments.

The weighted average debt-to-capitalisation ratio of the 22 rated developers is expected to rise to around 55% in 2019 from around 51% a few years ago. The ratio of funds from operations (FFO) to total debt could drop to around 12-13% from 14-15% few years ago.

In 2018, we rated 22 residential property developers, with ratings ranging from BB to A+. Two were downgraded and two were assigned a "positive" outlook. Taken together, the 22 firms had outstanding long-term bonds worth 232.3 billion baht at the end of 2018. That accounted for 64% of all their reported interest-bearing debt.

According to data from Agency for Real Estate Affairs, the value of new projects launched and sold in the Bangkok Metropolitan Region peaked in 2018. The number of units launched grew by 9% year-on-year to 125,118 and the value grew 28% to 565.7 billion baht. Housing sales peaked at 511 billion baht, up 23%, with unit sales rising 16% from the year before.

Condominium sales accounted for 58% of the total market, increasing 22% in terms of units and 29% in value. Condominium inventory rose 6.5% to a record 81,818 units. However, the value of the remaining unsold units increased more rapidly, by 15% to 329.4 billion, or around 1.4 times the average annual presales from 2016-18. 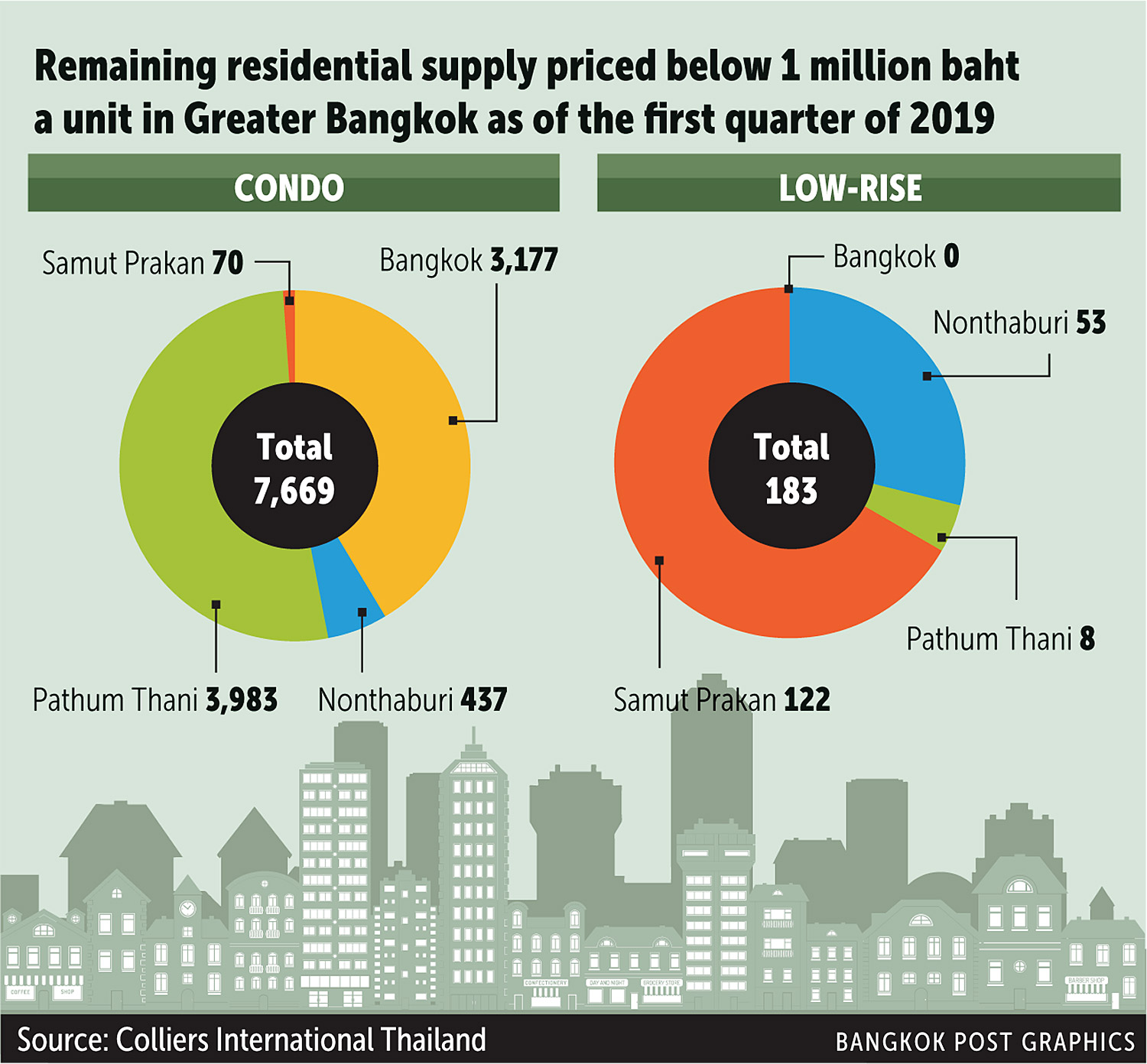 One reason is banks have become much stricter when lending to homebuyers in the low-income segment. The deterioration in the overall quality of mortgage loans moved the BoT to impose its new LTV curbs.

Key growth drivers: Extensions of the mass-transit network will open new zones for developers. Eight projects are currently under construction, three have been approved by the cabinet, and one project is out for bidding.

Interest rates remain low. Last year, the central bank raised the one-day policy rate by just 25 basis points in the last quarter of 2018. This rise was less than our expectation.

In addition, several rated developers have enjoyed lower bond coupon rates rather than the rates banks would charge for loans. The average coupon rate of a three-year bond issued in 2018 was just 2.5% for an A-rated issuer and 3.93% for a BBB-rated issuer. 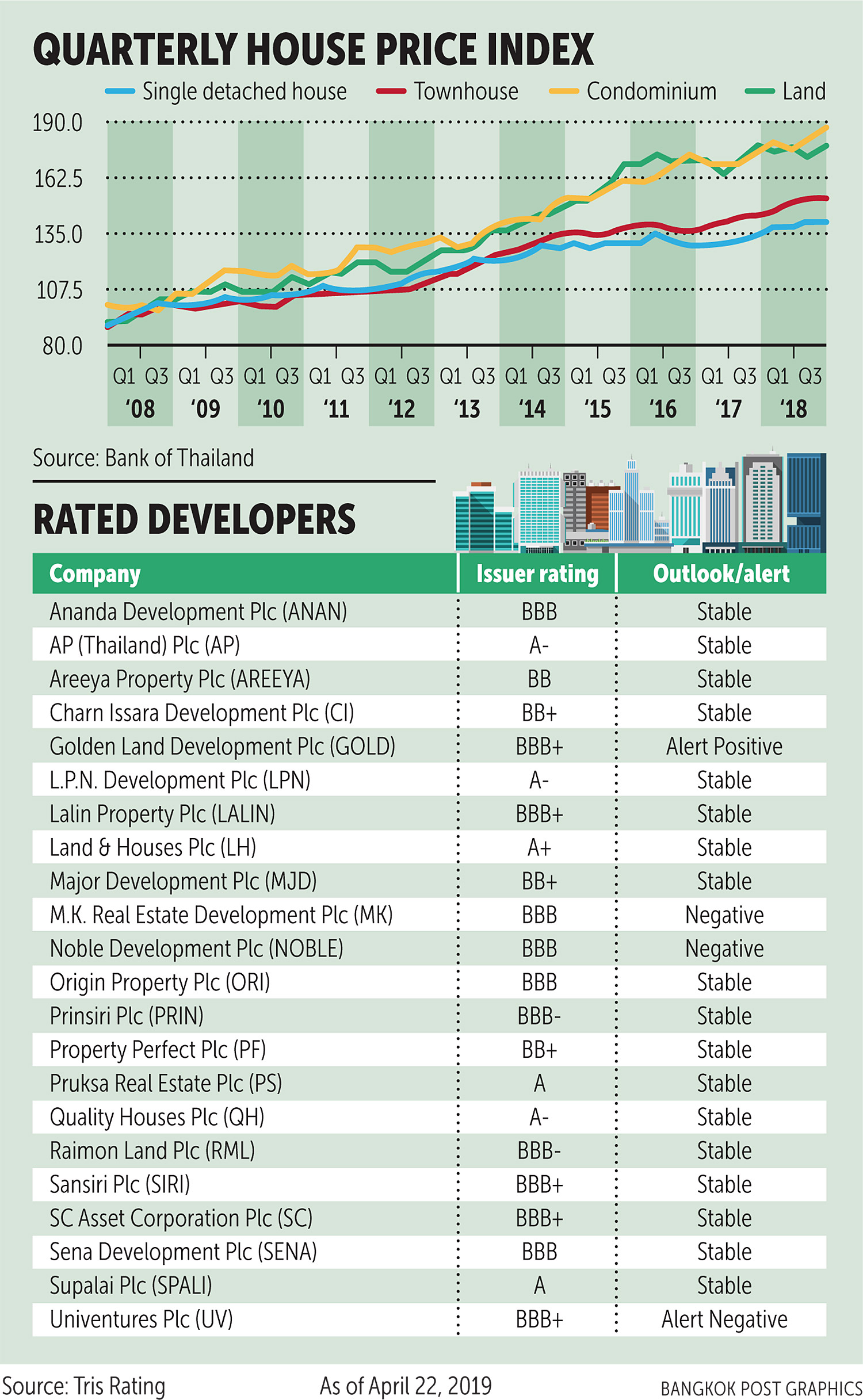 Several developers have chosen to fund their projects by issuing bonds rather than obtaining bank loans.

The second is investors that purchase several condo units at the same time. They expect to sell the units before the completed unit is ready to transfer, or, if they must take delivery, they expect to borrow 90-100% of the value from the banks.

If these investors must make larger down payments, they will not purchase as many units as before.

We believe these new LTV measures should affect demand for condominiums over the next one to two years.

However, they will benefit the industry in the long run by improving the financial discipline of homebuyers, the quality of developers' backlog, and the quality of mortgage loans at banks. These measures should also help curb some speculative demand.

MQDC looks to innovation and R&D