Developers should freeze the supply of new condominiums in Pattaya because the coronavirus outbreak is hurting demand and will increase the number of unsold units to a record high, says property consultant Colliers International Thailand.

Phattarachai Taweewong, associate director of research for Colliers, said the impact from the virus on the condo market will be severe in Pattaya, where the market relies heavily on foreign buyers, particularly from China.

"The market has been down since last year because the Chinese, who make up the majority of foreign buyers in Pattaya, had difficulties with money transfers and felt the impact from the trade war," he said. "The stronger baht and weaker yuan also weakened their purchasing power."

Mr Phattarachai said there will be completed condo units at projects scheduled to transfer in the first half to Chinese buyers that will not be transferred.

"These buyers may dump the units they booked despite making down payments," he said. "These units will return to the market as unsold supply." 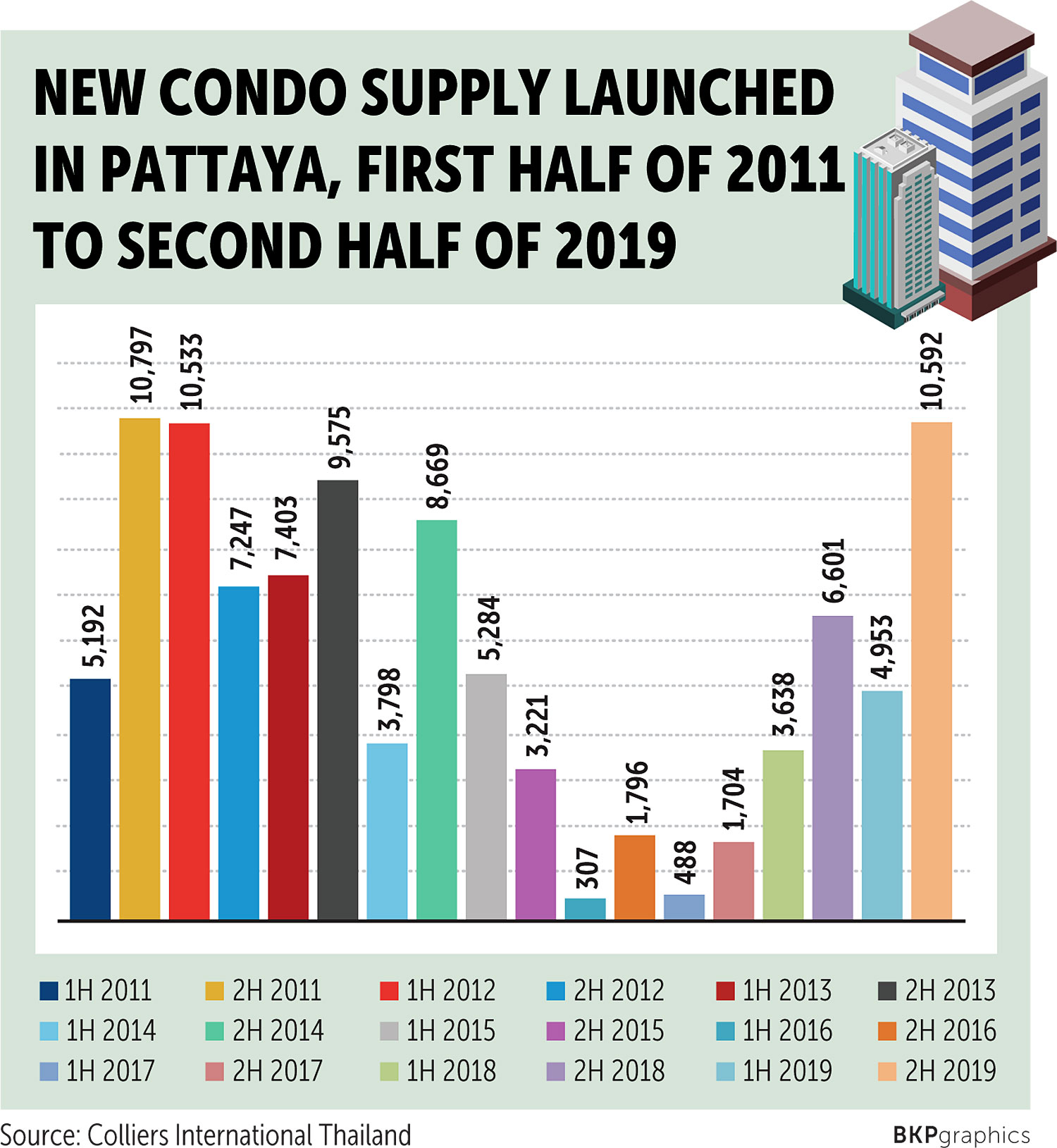 The surge was largely because of an abundance of new condo supply launched last year with a total of 15,540 units, the biggest portion in the past five years.

Mr Phattarachai said this year will see at least three new condo projects with a total of 1,200 units scheduled to launch in Pattaya.

"As the coronavirus has dampened demand, developers should wait until existing supply is absorbed," he said. "Otherwise the number of unsold units will soar to a new high this year.

"The market will come back next year as Chinese buyers consider buying more overseas properties. To survive the current setback, developers should extend the transfer period for Chinese buyers and find new markets such as India and Europe."

The overall sales rate of condo supply was 73%, narrowly rising from 2018. But the number of returned units will cause the sales rate to drop to 70% by the end of 2020, Mr Phattarachai said.

Jomtien and Na Jomtien have remained popular locations among developers during the past five years. Many projects were large-scale developments launched by Chinese firms. Some consisted of more than 2,000 units per project.

The boom caused these two locations to see the largest number of unsold units in Pattaya, with about 20,000 units at the end of 2019.

Wong Amat saw the smallest number of unsold condos at only 580 units, due to limited land supply.

"The most popular condo projects in the second half of last year were those offering a guaranteed return, as condo buyers in Pattaya bought them as second homes," Mr Phattarachai said. "The programme gives them an alternative to make a better return than depositing money."

He said condo demand in Pattaya each year is about 35% of total unsold supply.

The remaining 25,000 units will take at least three years to absorb if there is no new supply being added.

"As the market remains sluggish and the number of unsold units was huge, some developers froze development temporarily," Mr Phattarachai said.