Phattarachai Taweewong, associate director of research and communications at property consultant Colliers International Thailand, said there was no light at the end of the tunnel for the global and domestic economy.

With a poor economic outlook likely to worsen, off-plan condos may not be popular with buyers, particularly when there are massive ready-to-transfer units offering discounts and promotions, he said.

The majority of condo buyers who make a decision today prefer completed units because they can view the units and transfer immediately once payment is complete.

With discounts and campaigns, those units have lower prices than newly launched supply.

In the second quarter, many developers whose condo inventory was bloated offered discounts of up to 40% to drain stock and generate revenue.

Some who had loans to pay needed cash quickly and offered even cheaper prices to boost sales amid the fear of an economic slowdown worsened by the pandemic.

"As most developers prioritised existing supply and froze new project launches, the number of new condos in the second quarter plunged to a record low," Mr Phattarachai said.

According to Colliers' research department, there were only 1,206 units from five projects launched in Bangkok in the second quarter, down 80% from the first quarter and 88% from the same period last year.

The sales rate of new condo supply launched in the second quarter was also a record low of only 29%, a continuation of decreases since the fourth quarter last year. 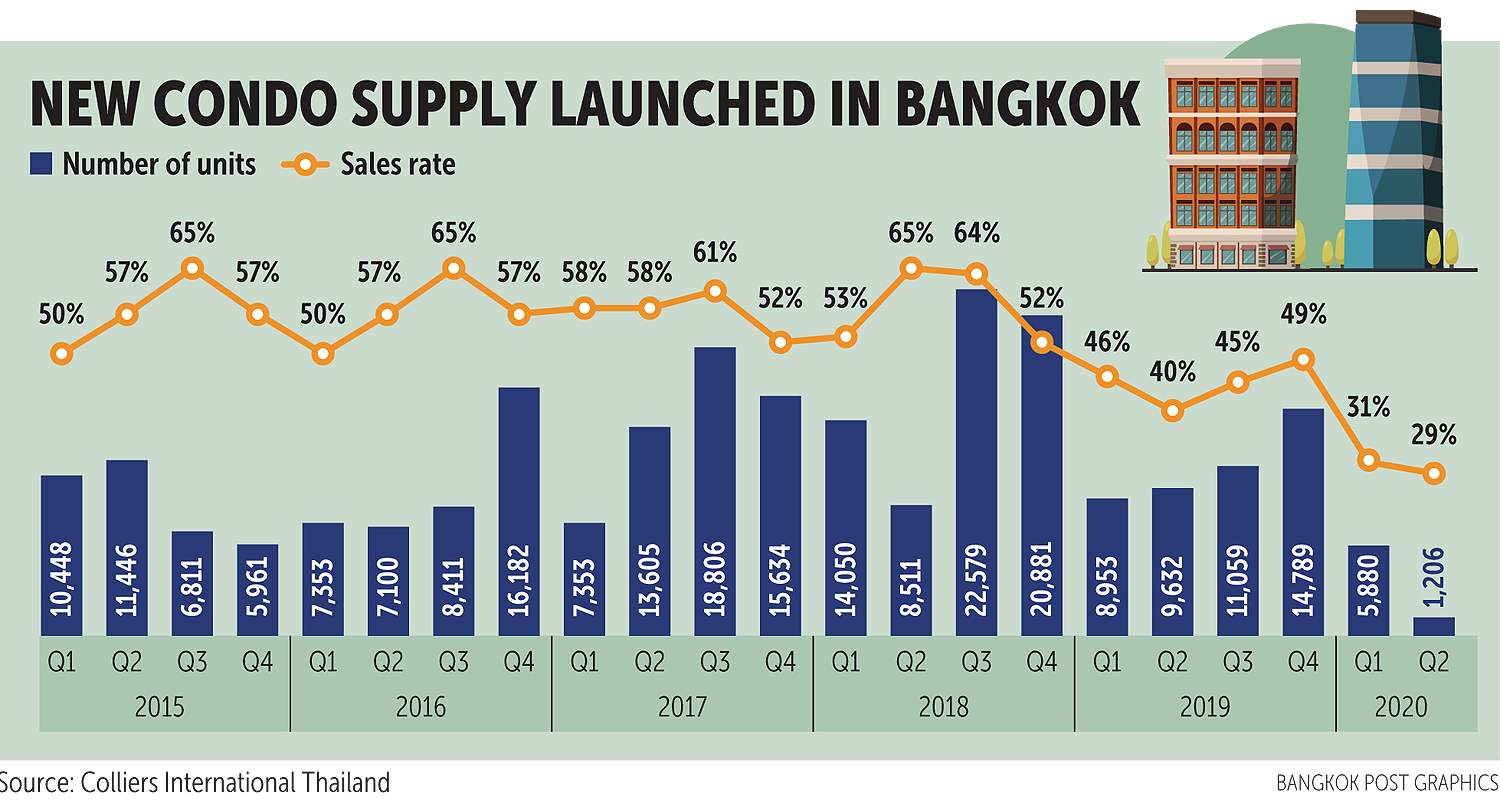 Mr Phattarachai said most condo buyers flocked to buy completed discounted units, with many projects sold out after facing sluggish sales for years.

He forecast the sales rate of new condo supply launched in the third and fourth quarters to be higher than the second quarter, but will remain lower than the average even as the volume of new supply surpasses that of the first half.

"If developers continue with discounts and campaigns for their completed units, the sales rate for new launches will be slow," Mr Phattarachai said.

To get a good sales rate, he suggested developers set the prices of new supply lower than existing ones in the same location that offer fierce promotions.

"Prices should be competitive and selling points or features should be attractive enough to draw buyers from those existing units," said Mr Phattarachai.

Only one of the five projects launched in the second quarter was from a major developer, Pruksa Real Estate, while the others were from non-listed and small firms.

Average sales prices dropped 27% from the first quarter to 86,737 baht per square metre as the majority were from non-listed, small firms offering prices at less than 100,000 baht per sq m. Most of them were in outer city locations.