Many big-ticket mass transit projects have been subject to delays from their original schedules. The impact of the coronavirus outbreak is not alone to be blamed; other snags have included the slow formation of a government after the March 2019 election, as well as policy rejigs by the Transport Ministry, which is controlled by a representative from the Bhumjaithai Party.

Earlier this year, Transport Minister Saksayam Chidchob declared that the ministry would expedite 44 transport megaprojects worth 1.94 trillion baht to stimulate financial flows and deal with anticipated volatility in the global economy. 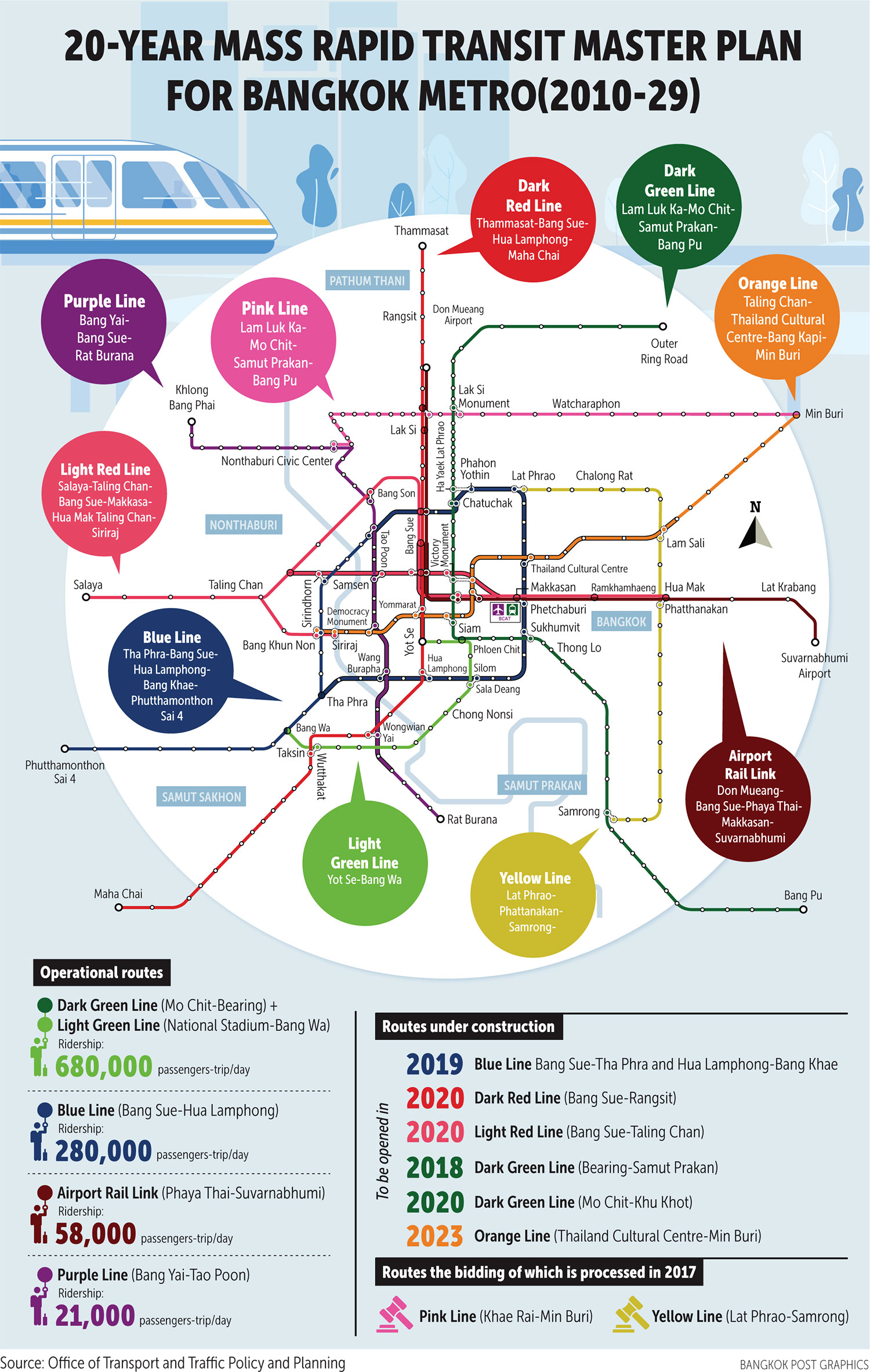 The government is also proceeding with the construction of a high-speed train project from Bangkok to the northeastern province of Nakhon Ratchasima.

Officials acknowledge that many projects are likely to be put off, including the Bang Sue-Rangsit Red Line extensions in northern Bangkok, rescheduled to start operation in 2023 instead of 2021.

The Red Line is part of the State Railway of Thailand's project to create an expansive network of urban trains, including the BTS and the MRT, to link the inner city with surrounding areas of Bangkok.

The cost blew out because the design didn't correspond precisely to the actual cost of construction and the prices of the three winning contracts were approved above the predicted price.

The Red Line extension had already exceeded the approved budget of 55 billion baht. It was revised up to 93 billion baht and will now be pushed up by a further 10.3 billion baht.

The SRT is asking the Council of State to examine the legality of the SRT's variation order (VO) for changes to the scope of construction contracts for the Bang Sue-Rangsit Red Line extension. 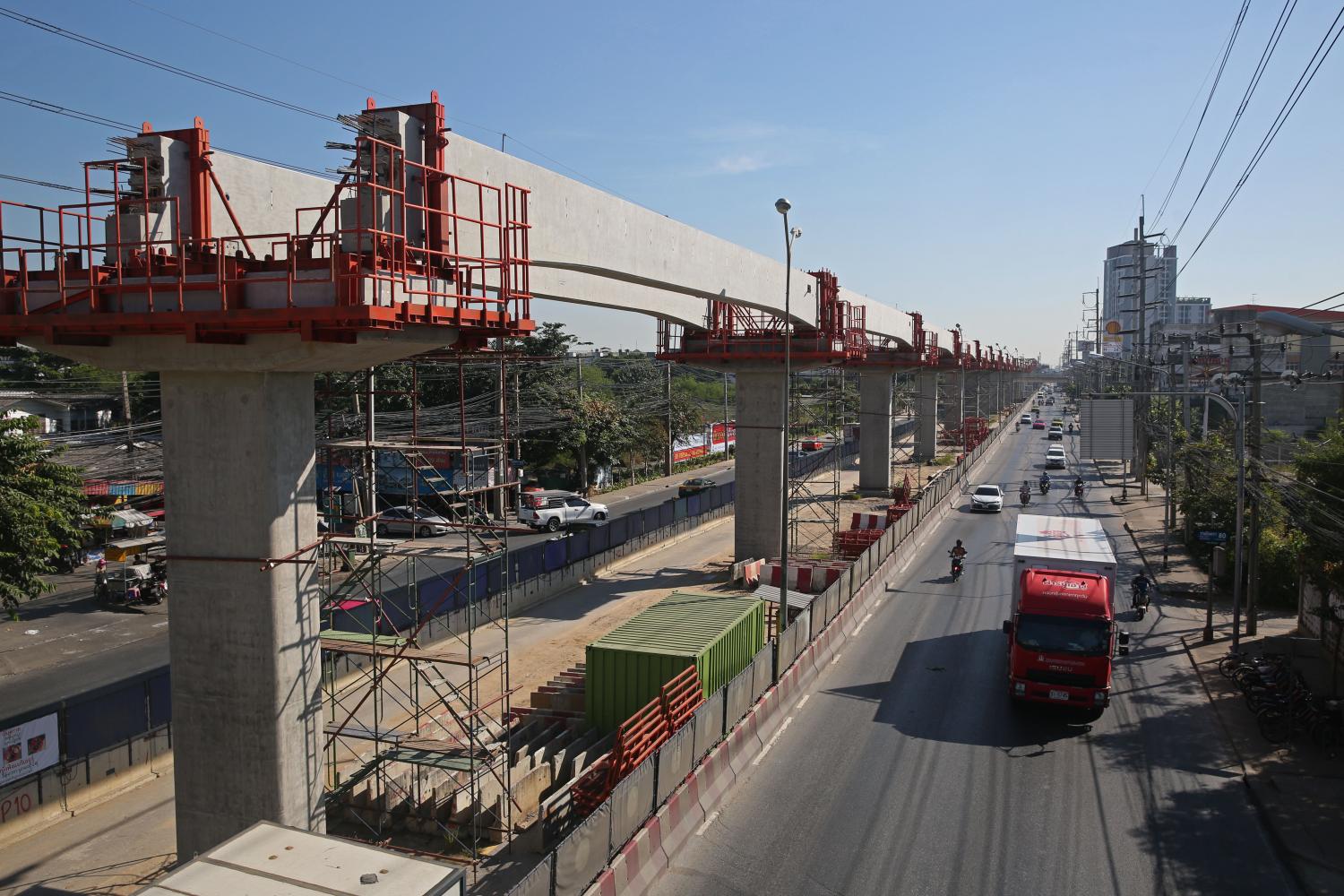 The Pink Line, running from Khae Rai to Min Buri, is 59.8% complete and expected to start operation in October 2021 as planned.

The SRT has issued a VO for Contract No.1, which involves additional civil works for the Bang Sue central station and a maintenance and repair depot. Extra construction work will cost about 4.5 billion baht.

The SRT also issued a VO for Contract No.2, which involves civil works and rail track construction. Extra work for Contract No.3, which deals with electricity and mechanical systems, may also be considered.

Construction under both contracts has yet to start, said SRT governor Niruj Maneepun, and additional costs are expected to be incurred when construction begins.

According to the Mass Rapid Transit Authority of Thailand's latest report, as of July 31, the Orange Line's eastern section (Thailand Cultural Centre-Min Buri) is now 66.06% complete. Operation is scheduled by March 2024, delayed from the previous schedule of February 2023.

The Yellow Line (Lat Pharo-Samrong) is 59.75% complete, but operation is rescheduled to start by July 2023 instead of October 2022.

The MRTA has already opened a bid for the Orange Line's western section (Bang Khun Non-Thailand Cultural Centre). The winning contractor is to be finalised by February 2021, with operation starting by February 2026, delayed from the previous schedule of September 2025.

The Purple Line (Tao Poon-Rat Burana) is expected to open bidding this year after the cabinet approved a royal decree to expropriate land in May. The project is planned for construction in 2021 and operation in 2027.

The Bang Sue-Tha Phra extension of the MRT Blue Line began operation in March of this year.