Vimarn Suriya Co, the developer of the mixed-use project Dusit Central Park, plans to eventually become a holding firm once the project is completed, with different affiliates operating each component of this luxury project.

"Vimarn Suriya is a partnership with CPN [Central Pattana Plc], which has an expertise and a value we don't have. We can learn retail business from CPN and generate recurring income from new ventures in the future," said Suphajee Suthumpun, a director of Vimarn Suriya.

She said the focus remains development of Dusit Central Park, which is a large investment requiring two more years to complete the first component.

In 2016, Dusit Thani set up three other subsidiaries comprising Suanlum Property, Phraram 4 Development and Saladang Property Management, which are meant to operate different components at Dusit Central Park when the project is completed.

Dusit Central Park is designed to have a 43-storey hotel with 279 rooms, a 69-storey branded residential tower with 406 units, and a 40-storey office building, with a combined total value of 46 billion baht.

Spanning a 23.5-rai plot on the corner of Silom and Rama IV roads opposite Lumpini Park, it is partly situated on the former site of the iconic Dusit Thani Bangkok Hotel.

The plot was leased from Crown Property Bureau for 30 years, excluding the construction period of seven years from July 1, 2024. The firm can renew the lease for another 30 years until June 30, 2084. 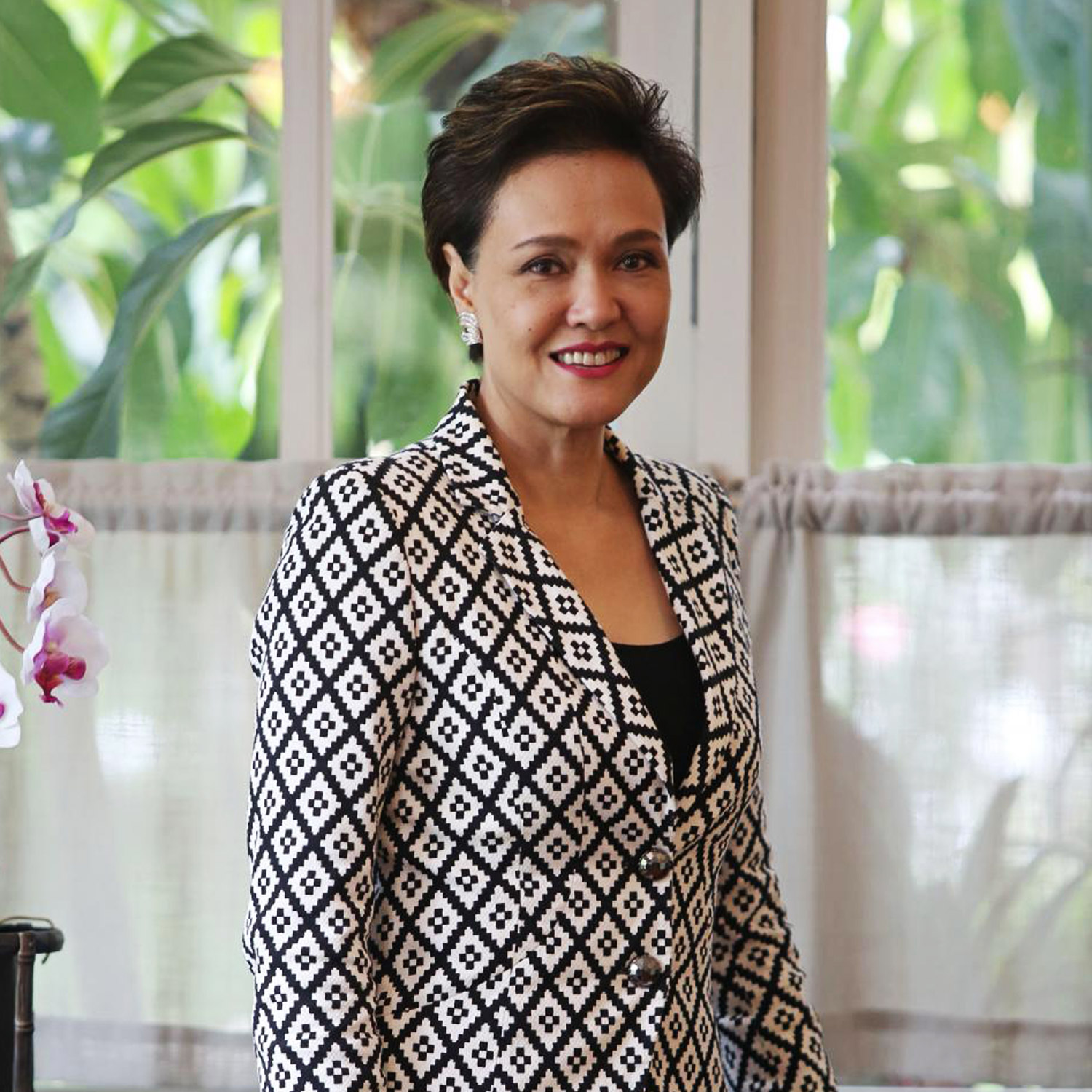 "If we are one of many, we might struggle too. We upgraded the project to super-luxury as the segment remains robust." -- Suphajee Suthumpun, Director, Vimarn Suriya

Vimarn Suriya is developing the hotel, residential tower and the bare shell of retail spaces on 21 rai, with a rental fee of 4.73 billion baht for a 60-year leasehold contract from 2024-2084.

Suanlum Property, in which CPN will hold 85% in 2022, up from the current 83.5%, will rent retail spaces comprising 63,304 square metres at a cost of 6.5 billion baht from Vimarn Suriya to develop them for Central Park shopping mall.

Phraram 4 Development, in which CPN holds 90% and Dusit 10%, is renting a plot sized 946.75 sq wah directly from Crown Property Bureau with a rental fee of 2.6 billion baht after Vimarn Suriya transferred the leasehold right to it.

Phraram 4 Development is also subleasing this plot to Saladang Property Management to develop Central Park Offices, with a lettable area of 90,000 sq m.

Saladang Property Management is a 100% subsidiary of CPN, created solely to invest in and develop the office tower.

"The first component to be completed is the hotel at the end of 2023. It will be operated by Dusit International under Dusit Thani Bangkok Hotel," said Mrs Suphajee, also Dusit's group chief executive.

The branded residential project features two brands -- Dusit Residences and Dusit Parkside -- with a total sales value of 17.4 billion baht. It is to be operated by Dusit International and has a projected completion date of 2025.

"Vimarn Suriya will become a holding company when the final component is completed in 2025. It will manage all shared facilities that link each component together," she said.

On March 16, 2021, Dusit and CPN reported an increased investment budget for Dusit Central Park, rising from a total of 30.3 billion baht to 38.4 billion.

Dusit's investment will rise from 12.91 billion baht to 17.25 billion, while CPN's contribution increases from 17.39 billion to 21.14 billion. The total value of Dusit Central Park is estimated to increase from 36.7 billion baht to 46 billion.

Roughly 2.1 billion baht of the additional investment goes to the hotel, with total area increasing from 42,000 sq m to 49,500 sq m. The number of restaurants and meeting rooms will expand from five and four to eight and six, respectively.

The hotel rooms are changing from a double-loaded corridor to a single-loaded corridor, providing all rooms with a park view. With the change in design, the number of hotel rooms decreases from 330 to 259, but the room rate is rising to 10,000 baht per night from 6,600 baht.

Some 3 billion baht is earmarked for expansion at Dusit Residences and Dusit Parkside, increasing the number of storeys from 62 to 69, while the total saleable area expands from 48,100 sq m to 50,543 sq m. The number of units increases from 301 to 406.

As the one-tower residential project will have two brands, their facilities, lobby, drop-off area, entrance and elevators will be separated. Dusit Residences is changing to a single-loaded corridor.

"The materials remain the same grade, but the living concepts are different," she said. "Dusit Residences has 160 units and will focus on large families, with unit sizes starting from 117-700 sq m. The design is classic luxury, grand and elegant, in a Dusit style."

Inspired by CPN, Dusit Parkside's design will be more stylish, yet contemporary, she said. 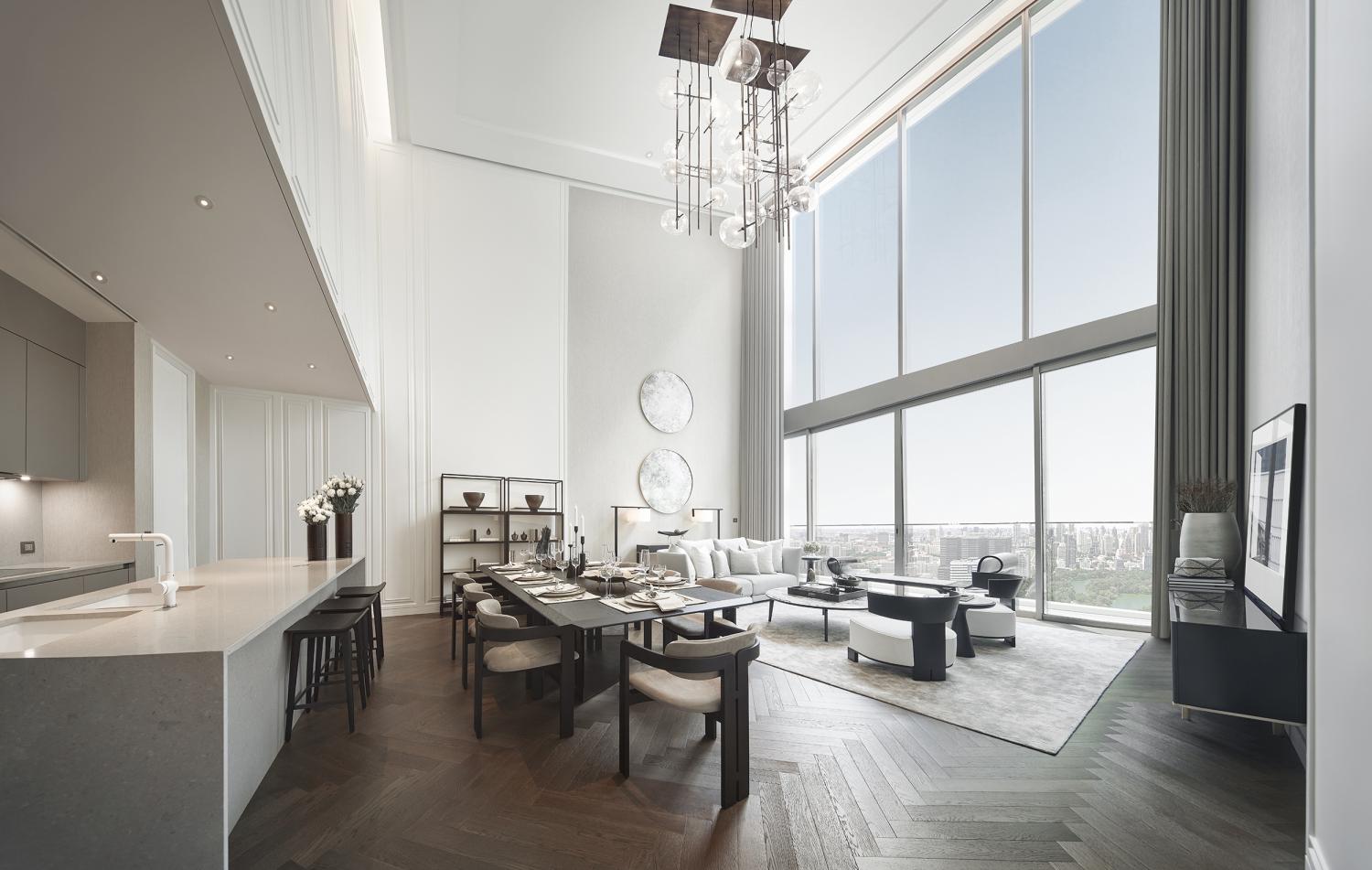 "After the pandemic spanned the globe, we reconsidered the project because the property market is struggling with a supply glut," said Mrs Suphajee. "If we are one of many, we might struggle too. We upgraded the project to super-luxury as the segment remains robust."

Roughly 30% of the 406 total units are sold, including two units by residents of the Middle East despite the travel obstacles associated with Covid-19.

"Many of the buyers are repeat Dusit guests," she said. "We plan to launch Dusit Residences and Dusit Parkside by the end of the year as the government relaxed the lockdown rules."

The most expensive penthouse on the 69th floor sized 700 sq m covers the entire floor. It has not yet opened for booking as the price has not been determined.

Last month, the project had an introductory roadshow in Khon Kaen, with more scheduled in Udon Thani, Phuket, Nakhon Ratchasima and Chiang Mai.

"Since the beginning of the project, Dusit required 'five musts'," said Mrs Suphajee. "One is it must not raise funds, as the project's investment is larger than Dusit's market cap."

Another is not too much borrowing, as this is risky, she said. Dusit's interest bearing debt is 1.7 times, compared with 0.4 times before the project started. Even if it reaches 2 times, this ratio is small compared with industry peers, said Mrs Suphajee.

A third must is Dusit must earn revenue during the five-year development period, as the former Dusit Thani Bangkok Hotel contributed 25% of total revenue. Vimarn Suriya will have cash flow from rents of the bare shell retail spaces leased to Suanlum Property, whose major stake is held by CPN, she said.

The other two musts are keeping Dusit's staff and reviving the legacy of Dusit Thani and founder Thanpuying Chanut Piyaoui, who was a pioneer of the country's hospitality industry.

"Her intention was to create an iconic landmark of Bangkok and deliver international service standards," said Mrs Suphajee.

Govt maintains land and building tax for another 2 years

CPN sets aside B3bn for 6 projects